Storm touches down in Halifax 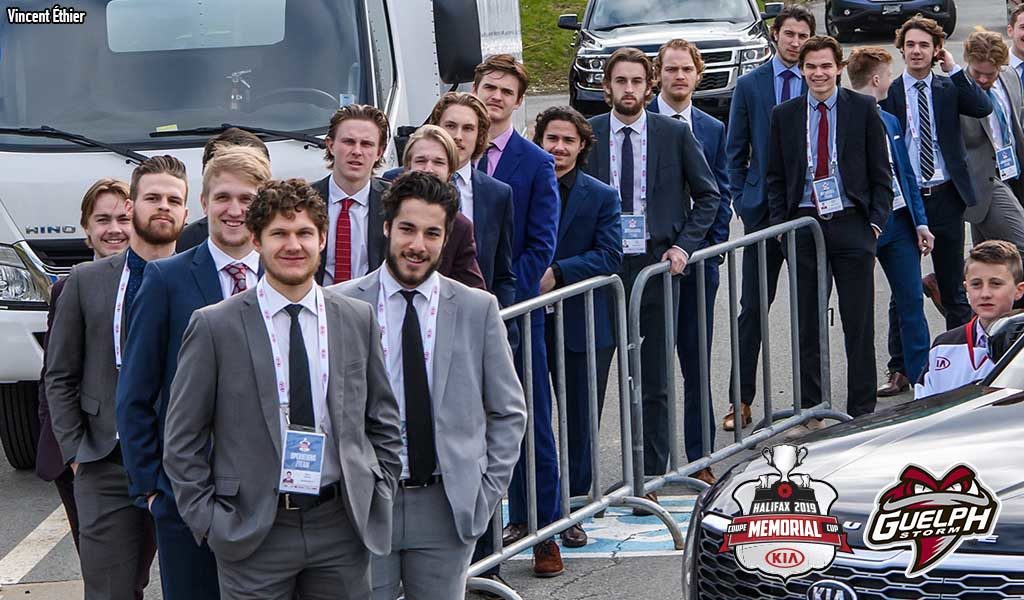 With the thrill of Sunday’s Championship finale still fresh, the Guelph Storm have begun the process of turning the page in preparation for the 2019 Memorial Cup Presented by Kia.

The Storm franchise will be making an impressive sixth tournament appearance in its 28-year existence, kicking things off against the QMJHL champion Rouyn-Noranda Huskies on Saturday afternoon following opening night on Friday when the host Halifax Mooseheads battle the WHL champion Prince Albert Raiders.

“There are four really good teams here, all have earned their way and nobody has backed into the event,” said Storm head coach George Burnett during a press conference alongside coaches of the other three competing clubs on Wednesday night. “It should be an outstanding tournament.”

Burnett will coach in his third Memorial Cup following his first appearance with the 1998 OHL champion Storm who reached overtime of the Championship Final before falling to the Portland Winterhawks. He returned to the event in 2008 as bench boss of the league finalist Belleville Bulls.

“Our kids are thrilled to be here,” he added. “We’re all excited to be in the province of Nova Scotia.”

The Storm boast a pair of players that have competed in the event before. Back-to-back OHL champions MacKenzie Entwistle and Jack Hanley reached the Memorial Cup Semi-Final with the Hamilton Bulldogs in Regina last spring.

“Being able to win two OHL championships and be back here to try and win another one is special,” said Entwistle of the experience.

Entwistle, who also represented Canada at the 2019 IIHF World Junior Hockey Championship, acknowledged Guelph’s playoff track record of falling behind early is something the team can’t afford to continue in a short-term event such as this.

“You have to start on time and that’s a big thing for our team,” he said. “Early in playoff series we’ve been getting down one, two or three games. You can’t take games off because then you start relying on other teams to do well and looking at the scoreboard for goals-for and against and you don’t want to put yourself in that situation.”

Guelph’s last trip to the Memorial Cup came in 2014 when a club built around names such as Robby Fabbri, Kerby Rychel, Scott Kosmachuk, Jason Dickinson, Brock McGinn and Matt Finn went 3-0 before falling to the Edmonton Oil Kings in the tournament finale.

The Storm was competitive again in 2014-15 before initiating a rebuild the year after, one that got its start with 2015 OHL Priority Selection first round pick Isaac Ratcliffe. The 6-foot-6 winger was named the OHL’s Mickey Renaud Captain’s Trophy recipient on Thursday following a 50-goal season and tremendous playoff showing.

“It’s really exciting to see how far we’ve come over the years, the way the crowd has stuck with us and the fans back in Guelph,” said Ratcliffe, who missed out on the OHL Playoffs in each of his first two seasons. “The way that we’ve stuck together as a team through thick and thin. To get to this point is pretty exciting.”

The Storm will be back on the ice Friday morning before players take an opportunity to size up the competition when a full building in Halifax will take in the host Mooseheads battling the Prince Albert Raiders.

Guelph hits the ice on Saturday at 3:30pm ET, taking on 59-game winners and QMJHL champions the Rouyn-Noranda Huskies live across the country on Sportsnet.

For full coverage of the 2019 Memorial Cup Presented by Kia visit chlmemorialcup.ca.