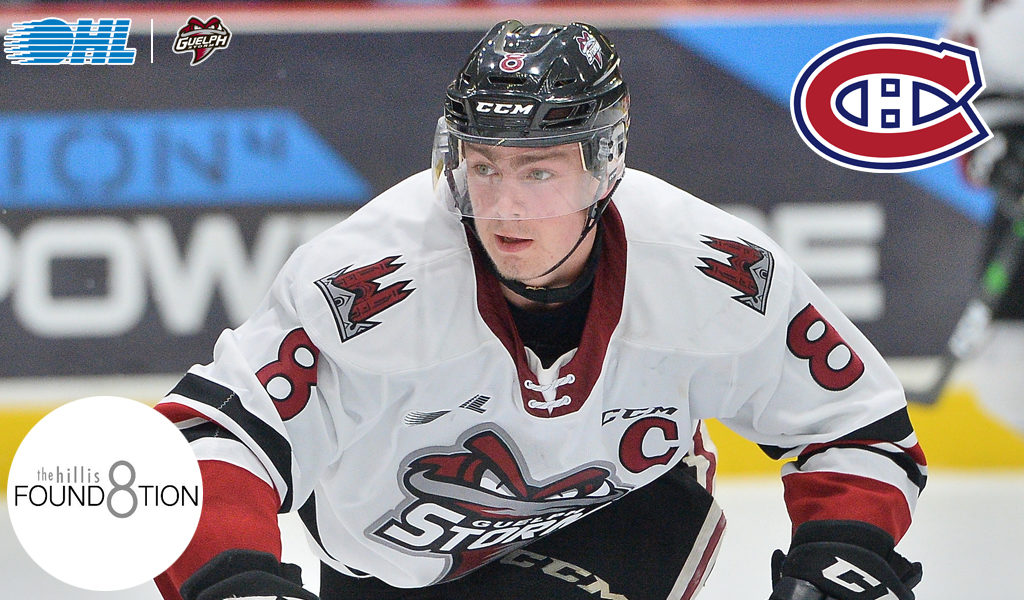 Cam Hillis‘s year has been one of positives.

Coming off of injury, he put together an inspiring 83-point season strengthened by an unmatched chemistry with teammate Pavel Gogolev. The two of them led a young Guelph Storm team through a commendable season with potential to turn heads in the playoffs.

The cancellation of the season due to COVID-19 would mean they wouldn’t see the postseason this time, but Hillis still had something to celebrate this spring, signing an entry-level contract with the Montreal Canadiens earlier this month.

“To sign with probably the most historic hockey franchise in all of sports, it’s super humbling,” he said. “It’s a great feeling that they believe in me and want me on their team down the road.”

Things have undoubtedly gone well for the 19-year-old Oshawa native this year. When asked about what’s been working, his response was simple: he’s just been having fun this season.

“My whole life, whenever I’ve had the most success in hockey is when I’m relaxed and playing the game just because I love the game,” he said of his successful year.

Now, he wants to share that love with younger kids gunning for a similar dream. He recently launched the Hillis Foundation in partnership with Canadian Tire’s Jumpstart, an initiative aimed at giving kids the chance to play sports and fall in love with the game the way he did.

Proud to launch the Hillis Found8tion: working to inspire all kids through the power of sport. Cam Hillis (@cam_hillis) and the @HillisFnd8tion have partnered with @CTJumpstart to help give kids a sporting chance. #HF8

The COVID-19 pandemic has, of course, kept him and all hockey players off the ice for the time being. Longing to get back to the sport, like so many kids, is what inspired him to finally announce its launch.

“I took a step back and realized how lucky I was to play the game that I love,” said Hillis of his new endeavour. “I felt like it was fitting to release it now and help the kids going forward.”

The idea for the foundation came last season, when Hillis’ appreciation for hockey ran deeper having been faced with a setback. Following a breakout rookie campaign that saw 59 points over his 60 appearances, his sophomore stint was ravaged by injury. A torn MCL and a broken collarbone on two separate occasions kept Hillis off the ice for most of the season, including all but two postseason matchups as the Storm carried on to their OHL championship.

“Everyone goes through their fair share of adversity. I guess last year was just my kind of year for that,” he said.

But that’s all in the past, and he chooses to focus on the positives. The now.

“I think I learned a lot about myself,” he maintains. “I had a lot of time to develop my skating with Barb Underhill and physically get stronger off the ice with all the time in the gym, and kind of turn some negatives into positives.”

The positives weren’t always easy to come by, he admits. But the Hillis Foundation was one of the positives to come out of his time off the ice. It was the time away from the game that made him fall in love with the sport all the more and strengthen his desire to help other kids do the same.

“If I could give younger kids the same opportunity that I had growing up – that’s what I want to do,” he said. “I know sports have done so much for me over the years.”

Hillis credits former Storm Community Relations Coordinator Steph Coratti with bringing his idea to life. He’s received a lot of support from his family as well, who he says have always instilled in him an appreciation for the small things and a reminder to look for those positives – something that has rang true for him now and over the past two seasons, more than ever.

The initiative’s launch was announced on Twitter and Instagram at the end of March and he’s been accepting donations on their website since. So far, he’s raised $2,337.

The uncertainty surrounding the COVID-19 pandemic has made it hard to plan any events, but Hillis has floated some ideas, including a golf tournament down the road. He’d like to spend time visiting kids in hospitals.

“It’s easy to spend time with kids, and it’s something I love doing,” he said.

And as he works hard toward his goal of cracking the Canadiens roster en route to a long NHL career, a goal he’s had all his life, he knows it’s a goal he won’t take for granted, and one he’ll continue to share with as many kids as possible.

“We’re hockey players but we’re still people who can still help the community,” he finished, It’s something I think a lot of hockey players should look to do down the road if they have the opportunity to.”