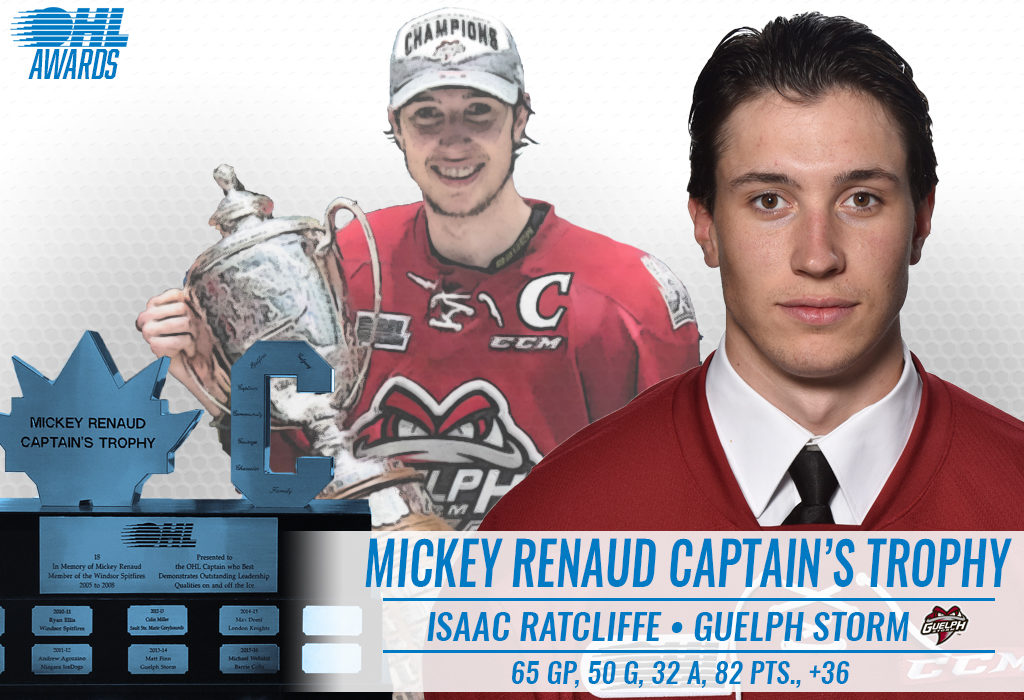 Toronto, ON – The Ontario Hockey League today announced that Isaac Ratcliffe of the Guelph Storm is the 2018-19 recipient of the Mickey Renaud Captain’s Trophy.

Ratcliffe was chosen for the award by a media selection committee as the OHL team captain that best exemplifies leadership on and off the ice, with a passion and dedication to the game of hockey and community that Mickey demonstrated.

The Philadelphia Flyers prospect successfully led one of the league’s most experienced units through a number of changes over the course of the season.  He provided leadership to guide all of his teammates, both old and new, working daily on and off the ice to consider a common goal for the benefit of the team.  His dedication extended into the community where he led the team’s new ‘Storm & STEM’ school program, continued his role as a minor hockey ambassador, and carried on the legacy left behind by former Storm captain Garrett McFadden as a spokesman for mental health awareness.  Ratcliffe has a special way of connecting with fans and the relationships that he built particularly helped a pair of young individuals dealing with cancer and bullying enjoy positive experiences with their families at the rink and through several events he organized.

“Winning the Mickey Renaud Captain’s Award is pretty exciting,” Ratcliffe said. “I got the chance to meet Mickey’s family at the start of the year at our first game in Windsor. Just to see the impact that he had on not only the Windsor community but the whole OHL community, just the way he acted on and off the ice – his character, his leadership, his work ethic on and off the ice were some things that stood out and to be recognized with some of those traits is pretty unbelievable. But with this group that we have here, it wasn’t too difficult to keep everyone intact and make sure we’re on the same page as a team. To get to where we are today, it was a whole group effort.

Garrett McFadden, who was a leader here my first year, really showed me the ropes. Not only around Guelph and on the ice, but off the ice and just how to carry myself in the community and how to really give back to the community and share the experience of what it’s like to be an OHL player.  Luca Caputi as well, took me under his wing. He saw a little light in me that really brought everything out and helped me get out of my shell as a junior hockey player.

It’s really exciting to get here now and really an honour to receive this award.”

On the ice, the 20-year-old from London, Ont., and longtime Jr. Knights captain during his minor hockey days, became the fifth Storm player to record 50 goals in a season and finished 18th in league scoring with 82 points in 62 games.  The club’s first round pick in the 2015 OHL Priority Selection amassed 217 points over his 245 career games in four seasons which included an alternate captain’s role in 2017-18 before wearing the ‘C’ in 2018-19.  Ratcliffe’s leadership, patience, and calming presence helped the Storm overcome adversity throughout the regular season and in playoffs battling back from three straight series deficits to win an OHL title.

“We are extremely proud of Isaac and his dedication and commitment to our organization,” said Storm General Manager and Head Coach George Burnett. “Off the ice Isaac has become a celebrated member of our community due to his passion for helping others. On the ice, Isaac has led our team through adversity with a confident presence. Congratulations to Isaac, you are a champion on and off the ice.”

Nomination forms are submitted annually by OHL General Managers on behalf of their individual team captains.  The selection committee consists of a panel of four, representing media from each OHL division.

The Mickey Renaud Captain’s Trophy will be formally presented to Ratcliffe at the OHL Awards Ceremony on Wednesday June 5 at the Hockey Hall of Fame in Toronto.