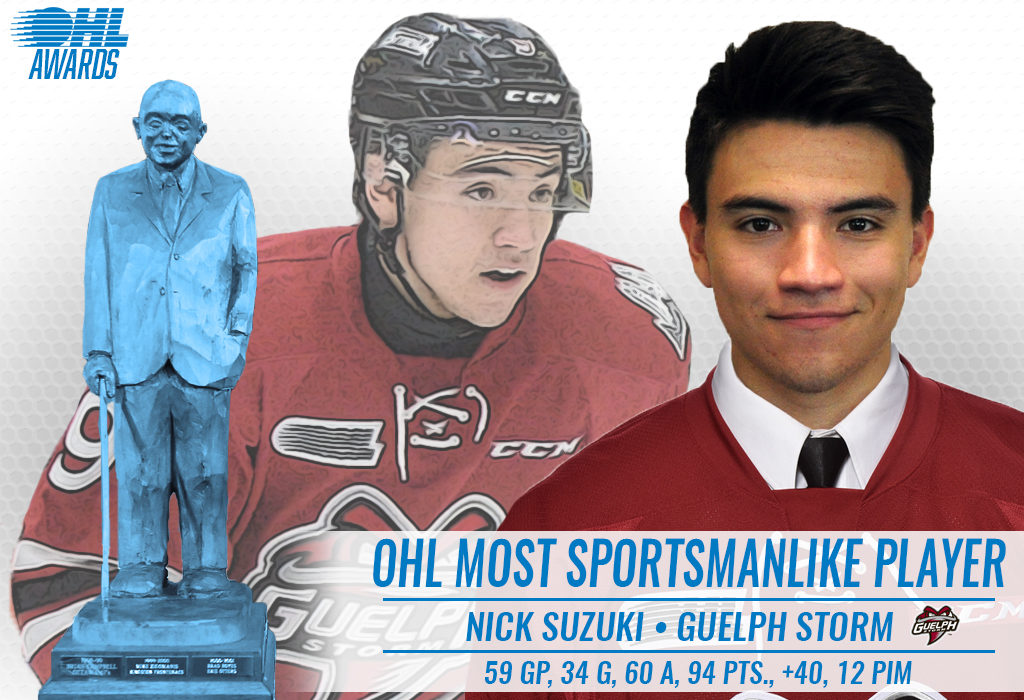 Toronto, ON – The Ontario Hockey League today announced that Montreal Canadiens prospect Nick Suzuki of the Guelph Storm is the 2018-19 recipient of the William Hanley Trophy awarded to the OHL’s Most Sportsmanlike Player of the Year.

“It is a huge honour to be chosen as the Most Sportsmanlike Player of the Year,” says Suzuki. “To be named for the third straight year is unbelievable to me and I wouldn’t be in this position without the support of all my family and teammates.”

A 19-year-old from London, Ont., Suzuki joined the Storm in January acquired by trade from the Owen Sound Attack after representing Canada at the 2019 IIHF World Junior Championship.  His regular season totals in Guelph included 12 goals and 37 assists for 49 points in just 29 games with only eight minutes in penalties, bringing his four-year career figures to an impressive 328 points in 251 games with 141 goals, 187 assists, and 44 penalty minutes.  This season Suzuki was recognized in the OHL Western Conference Coaches Poll winning the Smartest Player vote, finishing second in the Best Shot category, and was picked third Best Stickhandler.  A first round pick in the 2017 NHL Draft, Suzuki was acquired by the Canadiens in September, 2018, as part of a trade from the Vegas Golden Knights.

“What an outstanding achievement for Nick to be recognized for three consecutive seasons as the most sportsmanlike player in the league,” said Storm General Manager and Head Coach George Burnett. “He has contributed in so many different ways to our club since coming to Guelph in early January. His results on the ice speak for themselves and his calm demeanour and outstanding leadership have provided terrific support to our group throughout our regular season and current playoff run.”

The William Hanley Trophy is awarded each year based on a selection by the 20 General Managers of the Ontario Hockey League.  All 20 teams submit a nominee but are not permitted to vote for their own candidate with players receiving five points for a first place vote, three points for a second place vote, and one point for a third place vote.  The trophy is presented by the OHL to commemorate William Hanley, former Secretary-Manager of the Ontario Hockey Association for over 25 years.

Suzuki will be formally presented with the William Hanley Trophy at the 2018-19 OHL Awards Ceremony set for Wednesday June 5 at the Hockey Hall of Fame in Toronto.  He will be the OHL’s nominee for CHL Sportsman of the Year, an honour he received in 2017, to be presented in Halifax on May 25 as part of the 2019 Memorial Cup presented by Kia.