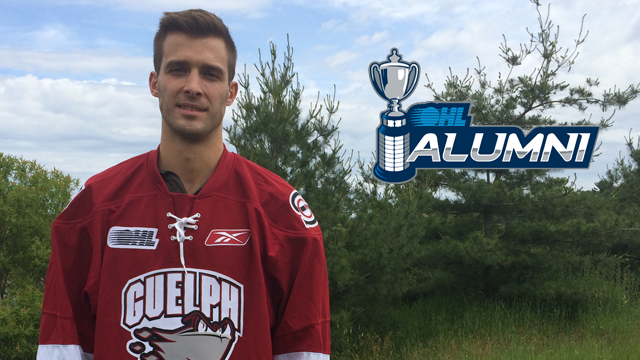 A four-year OHL veteran who went on to play eight years of professional hockey, former Guelph Storm and Windsor Spitfires forward Ryan Garlock has carved out a career in personal training, and recently opened a gym in Ottawa.

Visit ontariohockeyleague.com throughout the summer to hear about other members of the OHL Alumni Association.

A former first round (13th overall) pick by the Guelph Storm in the 2002 OHL Priority Selection, Garlock went on to play a 233-game OHL career, registering 75 goals, 107 assists and 182 points with a plus/minus rating of plus-18.

“It’s crazy to think my underage year in the league was 15 years ago,” Garlock said with a laugh. “It’s really incredible how quickly time passes, but it’s true what all the guys say, your years in the OHL are some of the best you’ll ever have.”

His first year and a half was spent in Guelph before he was dealt to Windsor in a deal that saw bruiser Cam Janssen sent to the eventual OHL champion Storm.

Garlock formed very close friendships during his time in Guelph.

“Our rookie class included Adam Dennis, Ryan Callahan and Tyler Haskins, all guys I enjoy catching up with today,” he said. “When you see guys like that it’s like hardly any time has passed and you pick up right where you left off.”

Garlock was drafted by the Chicago Blackhawks in the second round (45th overall) of the 2004 NHL Draft that summer and proceeded to enjoy his most productive OHL season in 2004-05, recording 33 goals, 35 assists and 68 points in as many games with the Spitfires.

Having recently retired after major hip surgery following the 2013-14 season, Garlock has established himself in a personal training career, one that has recently led him to open a gym of his own.

“It’s interesting actually, the gym that I had been working at recently closed its doors, but I re-opened it under a new name and an entirely new brand,” he said. “Myself and one of the clients that I had who has a business background made some assessments and we’ve been able to retain most of the staff and clientele. It’s been very successful.”

Fiit House, located in Ottawa’s west end, specializes in functional intense interval training that is delivered in 45 minute classes spent at different stations throughout the workout. Participants work in groups of anywhere between eight and as many as 35.

“What’s really nice about this form of training is that anyone can do it,” noted Garlock. “The gym is primarily catered to the general population, but we do have athletes that attend as well.”

One such athlete to recently stop by was former Spitfires teammate Cal O’Reilly who spent the 2015-16 season between the Buffalo Sabres and their AHL affiliate, the Rochester Americans.

“It was a nice surprise,” Garlock said of the visit. “It’s always nice to see a teammate and hear about how life is going.”

Another member of the newly established OHL Alumni Association, Garlock has enjoyed re-connecting with former teammates, opponents and graduates to share what it is they all have in common.

“We’ve got guys in this association working in all different avenues and professional fields,” he said. “The one constant, the one thing that we all share is that we’ve been able to take the things we learned through playing in the OHL and use them to facilitate the rest of our lives. Our paths are all different, but we’ve all been through similar experiences.”

Want to learn more about Ryan’s work with Fiit House? Check them out on Twitter at @FIIThouse.

The OHL Alumni Association is a member focused organization with the primary function of forming a global hockey based community directed towards strengthening and sustaining the connection and relationship between alumni, the league, and current players.