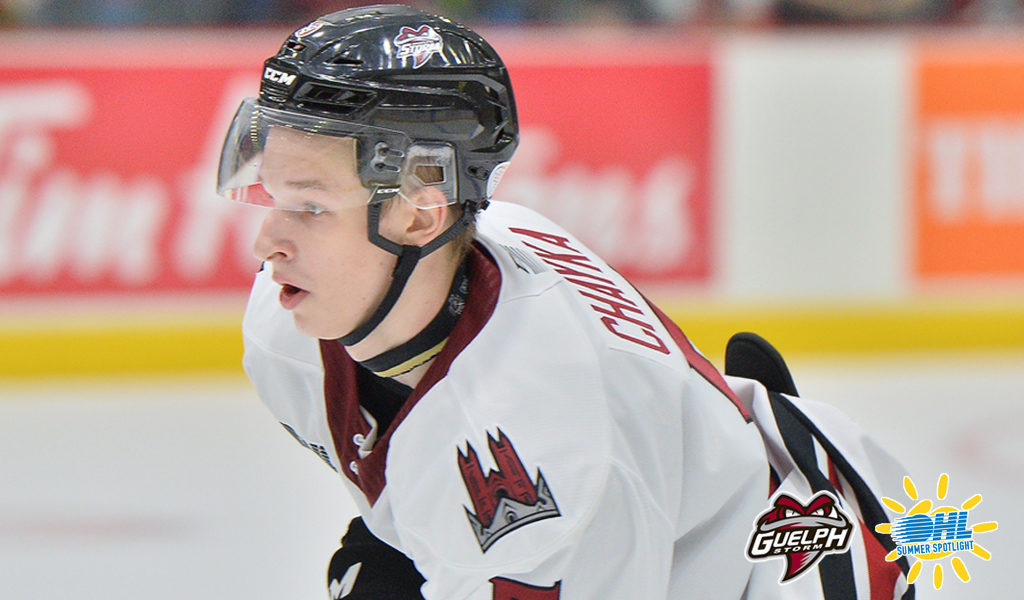 Daniil Chayka is a skillful defenceman with a great shot from the blue line. He carries the puck well and plays a calm game with poise. He has a winning attitude and is always willing to put in the work.

He possesses the qualities of a leader and believes he can take on that role in his third season with the Guelph Storm.

“This is my third year in the OHL and it’s an important year for our team and for me too,” said Chayka. “I will try to do my best to help my team win next year and it’ll improve me as a leader on the team.”

Storm head coach and general manager George Burnett believes he can, too. It’s a role well-earned, he says, expressing how impressed he is with the nearly 18-year-old’s confidence, progression and willingness to learn.

“I would expect him to be a part of our leadership group this coming season,” said Burnett. “I think he took a big step forward this past season as a leader and is doing leader-type things. I would think he would be a significant contributor to our leadership group next year, even as an 18-year-old.”

His winning resume speaks for itself. Following an OHL Cup Championship as a member of the Toronto Jr. Canadiens in 2018, he captured gold with Russia’s World Under-17 Hockey Challenge team and an OHL Championship with the Storm in 2019 before capturing a Hlinka Gretzky Cup title last summer and Russia’s first ever gold at the World Junior A Challenge in December.

Two #OHL defencemen are returning from Dawson Creek, BC with gold medals ?@Storm_City’s Daniil Chayka and @GoLondonKnights’ Kirill Steklov helped Russia ?? capture its first ever gold at the #WJAC.

He also took part in Team Russia’s U20 Camp roster this summer, a valuable experience for the 2021 NHL Draft eligible skater.

“It was a great lesson because it’s a bunch of guys who are drafted to the NHL already and who are signing contracts there,” said Chayka of the experience. “It was really good for me to look at them and watch how they prepare for the games, how they’re practicing, what they do before and after practices, what they eat, and learn their schedules.”

Over his rookie season and resulting 2019 OHL Championship, he had the opportunity to learn from veteran teammates and fellow countrymen Dmitri Samorukov, Alexey Toropchenko, Pavel Gogolev and Fedor Gordeev. He credits Samorukov in particular with taking him under his wing as a rookie, helping him adjust to the OHL level.

“He taught me everything; what I had to say, what I had to do in the dressing room, how I had to play, what plays to make in the D or O zone. He supported me along the way,” said Chayka of his former teammate, now with the Edmonton Oilers AHL affiliate Bakersfield Condors.

Following a 14-point rookie output, the Moscow native improved to 34 points in his second OHL stint. He really looked up to big, overage defenceman Gordeev over that sophomore season.

“Because he’s an older guy, he knows a lot more than me,” he said of Gordeev, who signed an entry-level contract with the Minnesota Wild in 2019. “He’s been in NHL camps and he just told me what people want to see from you at the pro level, because it’s such different hockey. He told me about small details.”

Three #OHL players have been included on Russia’s U20 camp roster ahead of the Sochi Hockey Open.

Now, with his teammates’ guidance under his belt and as one of the older guys in the lineup, Burnett believes Chayka is more than ready to be that same guy for the team’s younger up-and-coming players like fellow Russian skater Danny Zhilkin.

“He took on a pretty significant role on our team last year, playing in every situation and playing big minutes every night,” he said. “He’s ready for this responsibility and I think he’s learned from some good players but also some very good people, and we’re excited to see him meet the challenges that go along with your draft year, leading a young club and being the guy who’s prepared to go out and be in the top situations almost every night.”

And while he’s leading in those big situations with lessons learned from his former teammates, Chayka has plans to keep tacking on to his winning resume.

“My expectation for the third OHL season is to win as a team. I won one time in my rookie season and I want to win again with that team,” he finished. “I want to help my team as much as I can to win. It was amazing, the playoff run, and I want to do it again and have that feeling of winning. That’s my main goal for the season.”