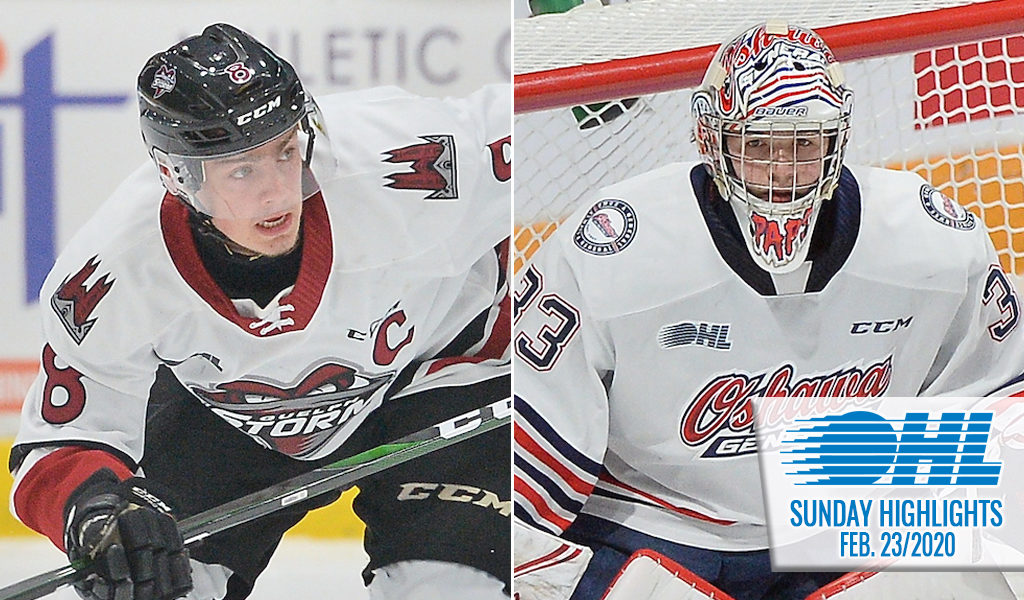 GUELPH 5, NIAGARA 4 – OT
Daniil Chayka (9) tied things up with 15 seconds left in regulation and Montreal Canadians prospect Cam Hillis (23) netted the overtime winner to complete the Guelph Storm’s 5-4 comeback win over the Niagara IceDogs. Guelph’s Keegan Stevenson (19) scored just over a minute in before Niagara followed up with goals from Cameron Butler (17) and Jackson Doherty (5) to take the lead. Storm rookie Danny Zhilkin (6) struck next to the tie things up before Jonah De Simone (8) and Mason Howard (7) pushed the IceDogs back in front. Minnesota Wild prospect and fifth year OHL veteran Fedor Gordeev (4) brought the Storm within one before Chayka’s last minute goal would force overtime. Captain Hillis then scored 2:10 into the extra frame to extend Guelph’s point streak to its seventh straight game. The Storm move up to 29-19-2-5 at sixth in the Western Conference while the IceDogs suffer their 14th straight loss, falling to 17-34-5-1 and maintain the Eastern Conference’s ninth place slot.
GAME CENTRE

OSHAWA 2, WINDSOR 1
Zachary Paputsakis saved 38 of 39 shots, backstopping his Oshawa Generals to a 2-1 defeat of the visiting Windsor Spitfires to tie the Peterborough Petes for second in the East Division and extend their point streak to seven games. After a scoreless first period, Montreal Canadiens prospect Allan McShane (23) put the Gens on the scoreboard with a power play marker before Windsor’s Will Cuylle (18) earned the tying goal. Captain Kyle MacLean (13) proved to be the difference marker, finding the back of the net on the power play in the final frame to put the Gens ahead. Windsor rookie Xavier Medina shut down 31 of the 33 shots he faced as the Spits fall to their fourth straight loss, dropping to 32-19-5-0 and fifth in the Western Conference. The Generals’ record climbs to 30-18-5-4. Spitfires forward Luke Boka played in his 307th career regular season game, surpassing John Scott Dickson for the all-time franchise record.
GAME CENTRE

MISSISSAUGA 8, BARRIE 1
Calvin Martin (18, 19) scored twice and seven different skaters had a hand in the Mississauga Steelheads’ 8-1 takedown of the visiting Central Division rival Barrie Colts. Aidan Prueter (12) and NHL Draft prospect James Hardie (33) helped the Fish to a 2-0 lead in the opening 20 minutes. Anthony Tabak (10) got the Colts on the board to start the second period but the Fish came flying back with six unanswered off the sticks of Florida Panthers pick Cole Schwindt (26), Martin, St. Louis Blues prospect Keean Washkurak (19), William Portokalis (9), and Richard Whittaker (18), before Martin capped off the blowout with his second on the afternoon. Steelheads netminder Kai Edmonds made 28 saves against his former club. The shots ended 31-29 in favour of Mississauga, who jump up to sixth place in the Eastern Conference and trail the Colts by five points with a 25-27-4-1 record. Barrie sees it’s three-game winning streak snapped as their record drops to 27-24-3-2 on the year.
GAME CENTRE

SAGINAW 6, NORTH BAY 3
Four-point performances from Minnesota Wild prospect Damien Giroux (2-2–4) and DJ Busdeker (1-3–4) helped push the Saginaw Spirit past the North Bay Battalion in a 6-3 win to officially clinch their spot in the postseason. The Spirit were off to a dominant start with six straight goals from DJ Busdeker (18), Blade Jenkins (13), Cole Perfetti (35), Damien Giroux (38, 39) and Josh Bloom (6). The Battalion eventually came on with three in a row thanks to Chad Denault (5), Shane Bulitka (22) and Alex Christopoulos (9). Perfetti’s goal and assist lifts him to 102 points on the season, setting a new record for points in a single season by a Spirit player. Saginaw outshot the Troops 27-21 and see their stretch improve to 36-16-3-2 on the year. North Bay continues to sit fifth in the Eastern Conference, as their win streak ends at three and their record falls to 14-39-3-0.
GAME CENTRE

OWEN SOUND 4, ERIE 2
Barret Kirwin’s (27, 28, 29) first hat-trick of the season propelled the Owen Sound Attack to a 4-2 defeat of the Erie Otters on the second of a back-to-back between the two division rivals. Kirwin opened the scoring and rookie Deni Goure (10) followed suit for a 2-0 Attack lead. Erie’s Austen Swankler (17) got on the board next, cutting Owen Sound’s lead in half on the power play. Kirwin and Elias Cohen (5) traded a goal each before Kirwin would eventually complete his hat-trick with an empty netter. The Otters outshot the Attack 36-26 and sit eighth in the Western Conference, while Owen Sound bounces a spot up. Erie’s record drops to 24-22-4-7 and Owen Sound improves to 27-22-4-3 on the season.
GAME CENTRE

SUDBURY 2, OTTAWA 0
David Bowen saved all 26 shots for his first OHL shutout in his season debut as the Sudbury Wolves shut out the top seeded Ottawa 67’s by a 2-0 tally. Following a scoreless first period, Buffalo Sabres prospect Matej Pekar recorded his 27th goal midway through the middle frame. Fifth year OHL vet Brad Chenier (22) later found the empty net to add insurance on the win. Ottawa’s Cedrick Andree made 22 saves on 23 shots as his team falls to 43-11-0-1 on the year and continues to lead the Eastern Conference. The Wolves’ record improves to 30-26-1-0 as they maintain the top of the Central Division. Quinton Byfield remained out of the lineup for Sudbury.
GAME CENTRE

SARNIA 4, SOO 2
Brayden Guy (15, 16) opened the scoring with back-to-back goals in the Sarnia Sting’s 4-2 defeat of the Soo Greyhounds. Guy potted a pair early in the opening period and Eric Hjorth (12) followed up with another to give the Sting a 3-0 advantage. The Greyhounds cut into the lead with markers from Robert Calisti (16) and Tye Kartye (22) but top NHL Draft prospect Jacob Perreault (35) extended the lead with a power play goal midway through the final frame, capping off the scoring. The shots totaled 36-27 in favour of the Sting, who earn their second straight win and climb to 20-31-5-1 in the West Division’s fifth place slot. The Greyhounds fall to their fourth straight loss and drop to 25-29-3-1 as they continue to sit ninth in the Western Conference with an eight point cushion above the Sting.
GAME CENTRE