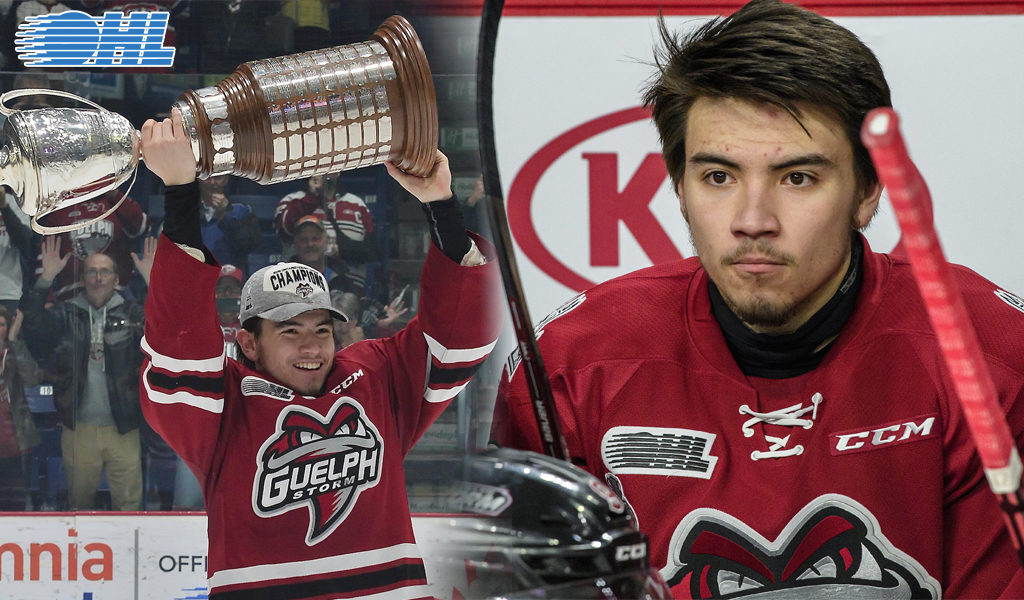 The road to winning an OHL Championship is a tough one.

Just ask Nick Suzuki, who stared what looked like imminent OHL playoff elimination in the face on three separate occasions.

Down 3-0 to the top-seeded London Knights in the second round of last year’s OHL Playoffs, he led his Guelph Storm to four straight wins and onward into the Western Conference Championship Series, scrambling back once again against the Saginaw Spirit. The Storm rebounded from a 3-1 series deficit to claim the Wayne Gretzky Trophy in seven games. Guelph rose to the occasion again in the Rogers OHL Championship Series, climbing out of a 2-0 series hole with four straight wins over the league’s first place Ottawa 67’s to hoist the J. Ross Robertson Cup.

Suzuki set a new Storm franchise record with 42 points along the way to earn Wayne Gretzky ’99’ Award honours, capping off his junior hockey career as a champion.

“He’s got a very, very bright future ahead of him.”

Nick Suzuki was unquestionably the @CanadiensMTL best player other than Carey Price on Monday as he continues to show the mindset that will prove to be valuable going forward. (By: @EricEngels)https://t.co/Ow6q9Y3xn9

Fast forward to now: the 20-year-old centreman is having an impactful debut season with the Montreal Canadiens and, in doing so, is drawing on last season’s OHL playoff run as a valuable stepping stone.

It’s a journey he may not have gone through had his leap to hockey’s pro ranks come a year or two sooner as some predicted it might.

As reported by Sportsnet’s Eric Engels, Suzuki’s impact was ever-present in his team’s 4-2 loss to the league-leading Washington Capitals on Monday. He was, as Engels puts it, the best player on the ice, save for Carey Price between the pipes.

His feed to Dale Weise in the third period in one of two attempts to even the score, his backhand pass to Joel Armia, his eagerness to take on Washington’s Tom Wilson – all in all, Suzuki’s hunger for victory was on full display.

And following the game, he credited that drive to last year’s postseason experience.

“It felt like we played probably 10 do-or-die games in the London series, in Saginaw,” said Suzuki, Engels reports. “I think I learned a lot through that. Just not wanting to go home was my kind of mindset there.”

Suzuki, older brother of Saginaw Spirit centreman and Carolina Hurricanes first rounder Ryan, was drafted 13th overall by the Vegas Golden Knights in the 2017 NHL Draft and received an invite to training camp ahead of the following season, but was reassigned to the Owen Sound Attack for what would be his third OHL campaign. His return for the 2017-2018 season resulted in a 100-point performance (42-58—100), followed by an 11-point showing through 12 playoff games.

Upon being traded to the Montreal Canadiens prior to the start of the 2018-2019 season, Suzuki was, again sent back to the Ontario Hockey League. He’d split his final season between the Attack and the Guelph Storm, wrapping up his career with a grand total of 328 points (141-187–328) over 251 regular season contests.

“We liked what we saw,” Canadiens Claude Julien said at the time with regards to his performance at training camp, as reported by the London Free Press. “But we sincerely think it’s better for him to return to junior.”

So return to junior he did, putting up 94 points in 59 games before leading the club on the resilient journey to that trophy at the very end, where Guelph’s run would come to an end in a 6-4 Memorial Cup semi-final loss to the Rouyn-Noranda Huskies.

Today, in the Canadiens lineup with 28 points (9-19–28) over 51 games, he’s emphasized, and perhaps proven, that his extra time of development in the Ontario Hockey League was a vital part of the process.