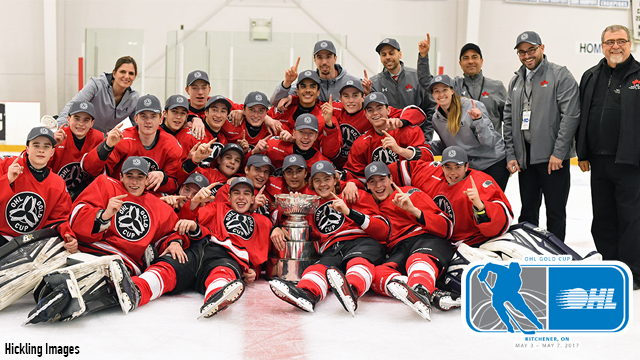 OHL prospects made their mark at the annual event with Niagara IceDogs first round selection Philip Tomasino leading all players in points (10) and goals (6) while Saginaw Spirit first rounder Nicholas Porco finished a close second with eight points (3-5–8).

Here’s a rundown of Sunday’s medal round action:

They fell behind just eight seconds into the Gold Medal Game, but Team GTHL Red battled back with three unanswered goals to be crowned 2017 OHL Gold Cup Champions on Sunday in Kitchener.

OHL Cup Champion Jamieson Rees (SAR) scored the game winner 17 seconds into the second frame as GTHL Red took the win by a score of 3-1 thanks to other goals from Guelph Storm prospects Mason Primeau and Anthony Aguanno.

“It’s an unbelievable experience,” said Rees following the championship celebration. ” I had so much fun here with the boys, meeting new people and playing with new teammates that used to be rivals.

“Thanks to some great trainers and a good coaching staff we came together as a team really quickly.”

Rees said he and teammate Aguanno called one another’s goals beforehand, making the win that much more thrilling.

“It’s funny, going into the second period he told me he felt like I was going to score and then I did on my first shift,” Rees recalled. “Then I did the same thing to him at the start of the third and he ended up scoring so it was a lot of fun.”

OMHA Black’s Matthew Gordon (KIT) opened the scoring in the early seconds of the game with an assist from Cameron Supryka (PBO), but GTHL Red controlled the flow of the game, taking the shot clock 33-21.

OMHA Black’s Ethan Langevin (SAR) made 30 saves in the loss to earn Player of the Game honours for his club.

After 40 minutes of scoreless hockey, Team HEO and Team OMHA White swapped goals in the third as blueliner Simon Rose (NB) landed the finishing blow with 3:13 remaining in the third period as HEO claimed OHL Gold Cup Bronze with a 3-2 victory.

The shots were just 14-8 for Team HEO after two periods but the pace really picked up in the third as HEO outshot OMHA White 13-12 in the final 20 minutes.

Connor McMichael (HAM) and Zachary Uens (FLNT) both scored for fourth place OMHA White in the loss while Cole Brady (GUE) made 24 saves in defeat.

Stephane Crevier (SAG) and Keean Washkurak (MISS) opened the scoring with a pair of first period goals less than two minutes apart for ALLIANCE before GTHL Blue battled back in the second with goals from Daniel D’Amico (WSR) and Brandon Coe (NB).

Prueter’s difference maker came with assists from Mark Woolley (GUE) and Cole Schwindt (MISS) as ALLIANCE outshot GTHL Blue 12-7 in the third period for a game-tying total of 28-28.

Jet Greaves (BAR) and Aidan Pitre (FLNT) shared the load in the ALLIANCE goal while GTHL Blue’s Matthew Keeley made 25 saves in the loss.

Christian Cicigoi (NB) stopped all 20 shots he faced, backstopping Team HNO to a 4-0 win in the battle of the north over Team NOHA.

Joel Rainville made 23 saves in goal for Team NOHA.