Team White opens Day 2 of Training Camp with a win 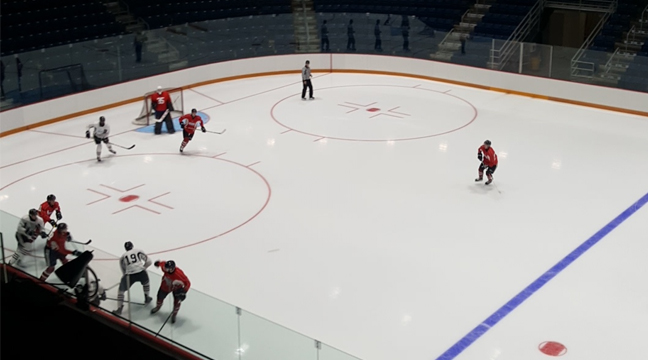 The Guelph Storm opened Day Two of 2017 Training Camp with the first scrimmage of the week between Team Red and Team White on Tuesday morning at The Sleeman Centre.
Storm veteran Garrett McFadden opened the scoring just seconds into the affair with a blistering slap shot from the point.
Team White continued to add pressure as Matt Hotchkiss, Tag Bertuzzi and Alexei Toropchenko all found twine before the end of the period, giving Team White a 4-0 lead.
It didn’t take long for Team Red to break the goose egg, as Quinn Hanna fired a wrist shot past Daws, two-minutes into the period.
Team White quickly responded on Hotchkiss’ second goal of the game. Cedric Ralph would then add onto Team White’s lead scoring on a penalty shot.
With six minutes left to go in the middle frame, Ralph converted on a breakaway for his second of the game.
After 40-minutes of play, Team White led 7-1.
Team Red had a strong start to the third period, as James McEwan scored to get one back for Team Red.
That would be as close as they would get, as Hotchkiss and Anthony Aguanno scored to secure the 9-2 win for Team White.
Nico Daws (opening 30-minutes) and Nick Haas (closing 30-minutes) manned the goal for Team White, while James Walker (opening 30-minutes) and Richard Ledek (closing 30-minutes) were between the pipes for Team Red.
The next scrimmage between Team Red and Team White during Storm Training Camp takes place tonight, Tuesday, August 29th at 6:00 pm at The Sleeman Centre.
Training Camp continues with two scrimmages on Wednesday, August 30th at 10:00 am and 6:00 pm at The Sleeman Centre. All Training Camp scrimmages are open to the public and free to attend.
The Storm kick off their preseason schedule with a road game on Friday, September 1, and make their home debut on Monday, September 4, followed by home games on Thursday, September 14 and Saturday September 16, for tickets, click here.
The Storm open the 2017-18 regular season on Friday, September 22nd when they host the visiting Sarnia Sting at 7:30pm. Tickets to all Storm 2017-18 regular season home games are on sale now and can be purchased online here, in person at the Guelph Storm Box Office located at the Old Quebec St. Shoppes, by phone 519-8379690.