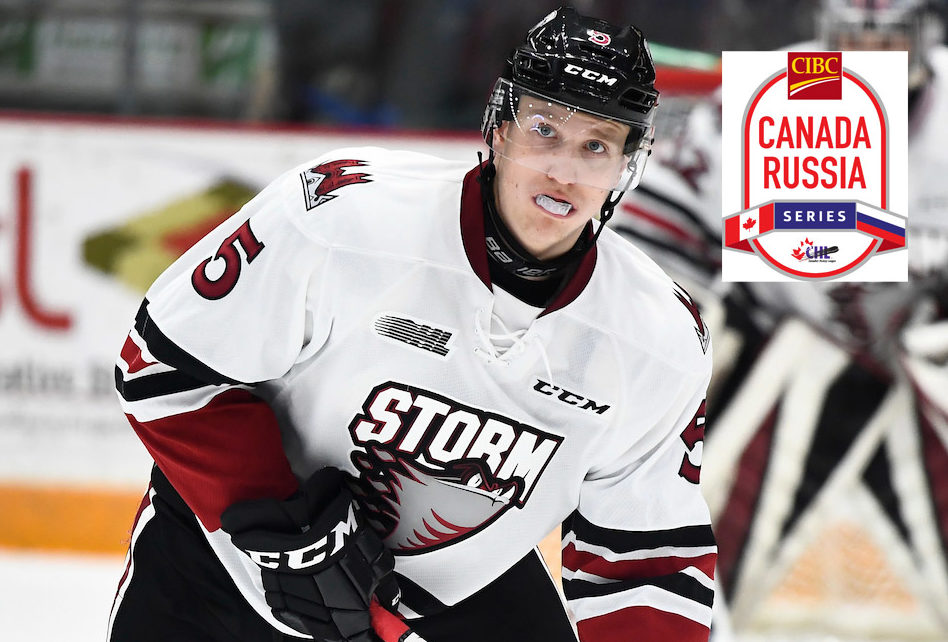 Storm defenceman Dmitri Samorukov has been named to the roster for Team Russia that will compete in the 2017 CIBC Canada Russia Series.

Toronto, ON – The Canadian Hockey League today announced the roster for Team Russia that will compete in the 2017 CIBC Canada Russia Series which begins on Monday November 6 in Moose Jaw, Saskatchewan.

A team of 24 Russian players including three goaltenders, nine defencemen, and 12 forwards will travel across Canada as part of the 15th annual series playing six games against CHL competition from November 6-16 in preparation for the 2018 IIHF World Junior Championship taking place this season in Buffalo, New York.

Of the 24 players, only Zaitsev and goaltender Vladislav Sukhachev return from last year’s event.  The netminder made four appearances and posted a 1-1-0 record with a goals-against-average of 3.55 and save percentage of .885 and later represented Russia at the 2017 World Junior earning a bronze medal.

Team Russia is led once again by head coach Valery Bragin making his sixth appearance and fourth straight year behind the bench at this event.  In his tenure as head coach of the Russian National Junior Team the program has earned World Junior gold (2011 in Buffalo), three silver medals (2016 in Finland, 2015 in Toronto, 2012 in Calgary), and one bronze (2017 in Montreal).

The WHL players competing in Moose Jaw on November 6 and in Swift Current November 7 include forward Alexander Alexeyev of the Red Deer Rebels and Broncos defenceman Artyom Minulin who will compete before his home crowd in Game 2.  For OHL games in Owen Sound on November 9 and in Sudbury November 13, Tampa Bay Lightning prospect Alexey Lipanov of the Barrie Colts will compete alongside Edmonton Oilers prospect Dmitri Samorukov of the Guelph Storm and Minnesota Wild prospect Dmitry Sokolov of the Game 4 host Wolves.  In the QMJHL games taking place November 14 in Charlottetown and November 16 in Moncton, Columbus Blue Jackets prospect and reigning QMJHL Player of the Year Vitalii Abramov of the Gatineau Olympiques will compete for Russia with Nashville Predators prospect Pavel Koltygin of the Drummondville Voltigeurs and Philadelphia Flyers prospect German Rubtsov of the Chicoutimi Sagueneens.

Rubtsov competed in the duration of the series last year scoring two goals in five games and was also a member of the bronze medal team in Montreal.  Minulin, Sokolov, and Abramov also return for a second straight year having competed against their regional leagues in 2016.

The 2017 CIBC Canada Russia Series is supported by title sponsor CIBC, the Official Bank of the CHL, along with associate sponsors Cooper Tires and Sherwin-Williams.  All games will be broadcast nationally on Sportsnet and TVA Sports.