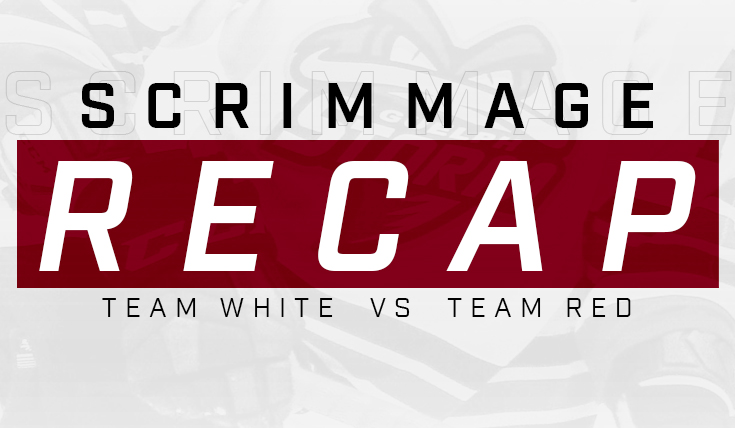 The returnees from the 2019 OHL Championship team stole the show during the third and final scrimmage of Training Camp. Keegan Stevenson, Cedric Ralph and Liam Hawel all made their first appearances in a Red vs. White scrimmage and did not disappoint.

Team White powered past Team Red for a second consecutive victory 8-5. Team White featured a veteran line with Cam Hillis centering Keegan Stevenson and Cedric Ralph. This line spent most of the game in the offensive zone and got rewarded with three goals; two from Stevenson and one from Ralph. Most of the scoring for Team White came in the second and third periods as they were played at 4 on 4 and 3 on 3 respectively. During the 4 on 4 period Jacob Maillet, Ty Collins and Sean Kawalec all found the back of the net. Kawalec also added a goal during the 3 on 3 period along with Marko Sikic.

Anothony Popovic continued his dominance from last year allowing just one goal during the first half of the game. Will Craig took over mid way through the second period and allowed 4 goals during the 4 on 4 and 3 on 3 periods.

Team Red showcased some of Guelph’s young future as well as veteran presence. 2019 first round pick Danny Zhilkin opened up the scoring in the second period. Veterans, Liam Hawel and Pavel Gogolev followed up with goals of their own. Steven Grant found the goal column twice in this game scoring during the 4 on 4 and 3 on 3 periods.

Owen Bennett started the game in goal for Team Red and allowed three goals in his 30 minutes of play. Tanner Wickware relieved Bennett halfway through the second period and faced a heavy dose of shots and breakaways from Team White during the 3 on 3 period. Wickware finished the game with five goals against.

The next game action for the Storm will be Friday night against the Mississauga Steelheads at 7pm. After this, Guelph will open their home exhibition schedule and play host to the Flint Firebirds on Saturday at 7pm at the Sleeman Center. Click here to purchase tickets. 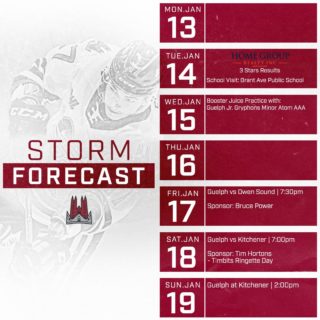