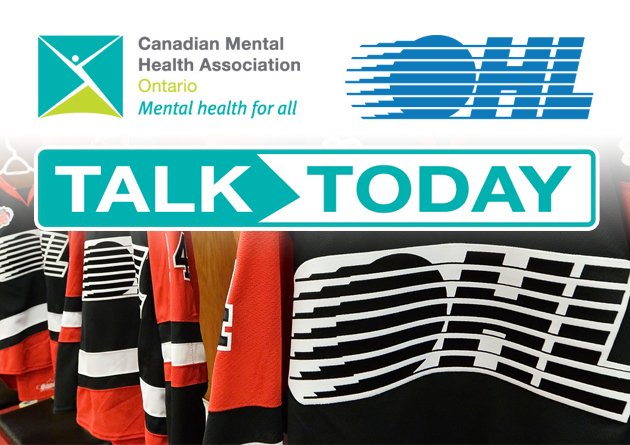 [January 31, Guelph, ON] – The Guelph Storm and Canadian Mental Health Association (CMHA), Waterloo-Wellington Branch are teaming up to raise awareness about the importance of mental health during an upcoming Guelph Storm home game.

The Guelph Storm game on Friday, February 3rd at 7:30pm will feature:

The awareness campaign is part of the ongoing commitment by the Guelph Storm and CMHA Waterloo Wellington to implement Talk Today, presented by Teachers Life. Talk Today provides mental health support to players and raises awareness about mental health and suicide prevention throughout communities across the OHL.

“We are pleased to partner with the Guelph Storm for the third year of the Talk Today program. The awareness game gives us an opportunity to spread the word about mental health awareness to the public. Training the Guelph Storm players, coaches and billet parents in suicide prevention creates more awareness and lets the players know they are not alone if they are struggling. It also gives them the tools to help their peers who may be in need of support. It is our hope that the training encourages members of the organization to be mental health advocates just as Captain Garrett McFadden has become with his initiative McFadden’s Movement,” said Fred Wagner, Executive Director of CMHA Waterloo Wellington.

“We continue to be very excited to be partnering with the CMHA in our Talk Today program. We are very proud to be recognized as the premier hockey development league in the world. We are equally as proud to help these great young men in our league to be better prepared for all life situations including the very topical issue of mental health and suicide awareness as it relates to their own lives and all those who may come in contact with them,” said Rick Gaetz, Guelph Storm Partner, and Governor.

Tickets for the game are still available and can be purchased by visiting the Storm box office at Old Quebec Street Mall, by phone at 519-837-9690 or by clicking HERE to buy online.