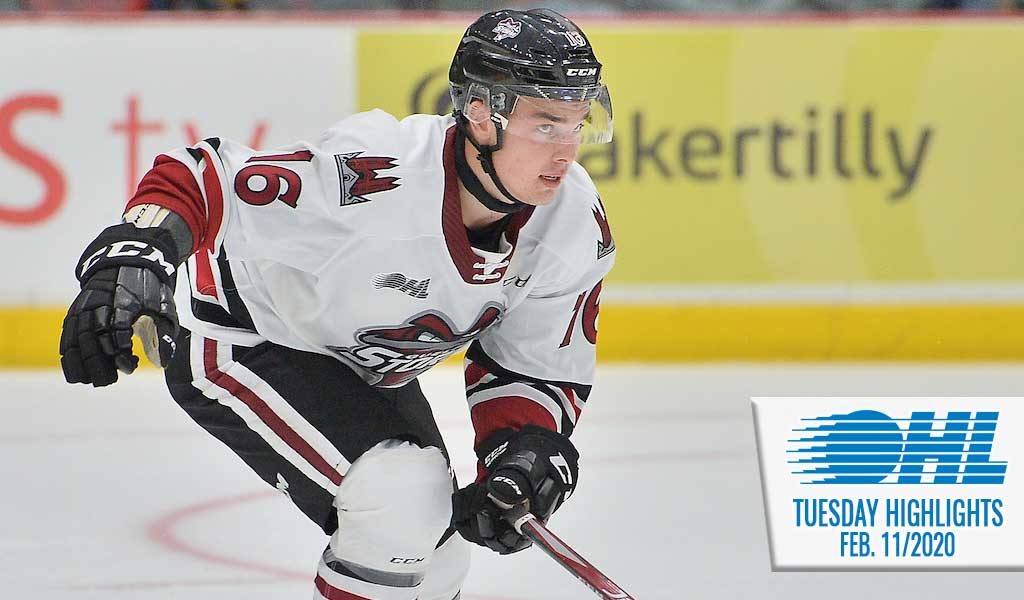 GUELPH 3, LONDON 1
A couple of late third period goals from Eric Uba (21, 22) pushed the Guelph Storm to a 3-1 victory, effectively ending the London Knights’ win streak. Jonathan Gruden (23) capitalized on a power play 56 seconds into the game for an early 1-0 London advantage. The Knights held on to their lead until Storm sophomore Ben McFarlane (3) scored shorthanded midway through the final frame. Uba netted the game winning goal at the 18:55 marker and followed it up with an empty netter to secure a two-goal cushion. The shots ended 38-37 in favour of the Knights, as Nico Daws rounded out the evening with 37 saves in net for the Storm. The Knights drop their first game since Jan. 11 and see their winning streak end at 10 games. They remain second in the Midwest Division at 34-14-1-1 while Guelph sits a spot below with a 26-19-2-4 tally.
GAME CENTRE

KITCHENER 3, ERIE 1
Liam Hawel (15, 16) scored a pair of goals as the Kitchener Rangers skated to a fourth straight win in a 3-1 defeat of the Erie Otters. Hawel, a fifth year OHL veteran, hit the back of the net just over a minute in before Otters top scorer Maxim Golod (21) tied things up midway through the first period. Draft eligible defenceman Donovan Sebrango (6) was able to reclaim the Kitchener lead with a power play goal a minute and a half later. Following a scoreless second period, Hawel extended the lead to a final 3-1 on the empty net with a minute left on the clock. Los Angeles Kings prospect Jacob Ingham stopped 37 of the 38 shots he faced between the pipes for the Rangers, while Erie’s Daniel Murphy shut down 31 of 33 attempts. The Otters remain in the Eastern Conference’s eighth place slot with a 21-20-4-6 tally, while the Rangers remain atop the Western Conference and see their record bump up to 33-12-5-2.
GAME CENTRE