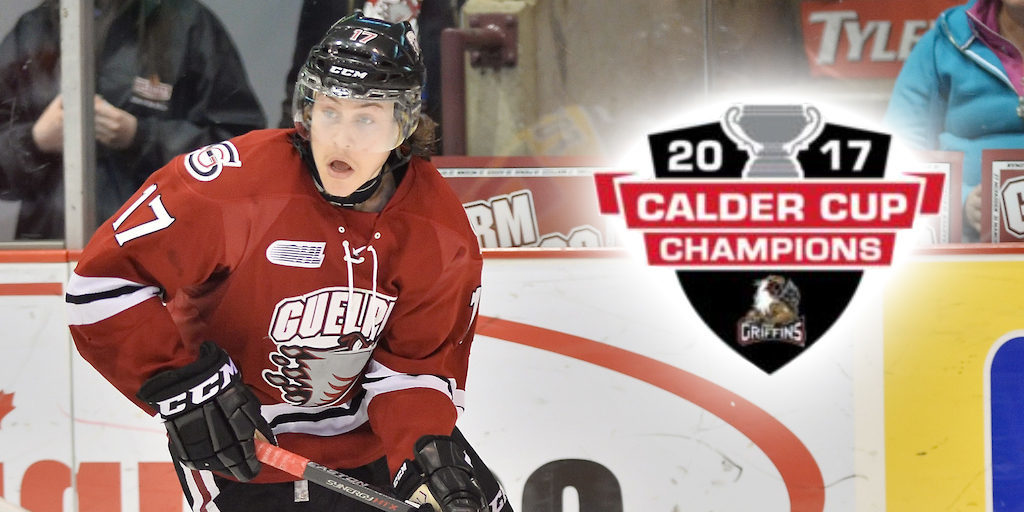 The Grand Rapids Griffins are 2017 American Hockey League champions following a 4-3 Game 6 victory over the Syracuse Crunch on Tuesday.

Seven OHL graduates were included on Grand Rapids’ playoff roster, with five seeing postseason action as the Griffins hoisted the Calder Cup on home ice. The AHL affiliate of the Detroit Red Wings, the Griffins were crowned champs for the second time in franchise history.

Down 3-2 entering the third period, Tyler Bertuzzi (Guelph Storm) knotted the score at three 3:50 into the third frame before Martin Frk (Halifax Mooseheads) scored the game winner at 12:41 with an assist going to blueliner Brian Lashoff (Kingston Frontenacs).

The Griffins prevailed in a rematch of the 2013 Calder Cup Final against the Syracuse Crunch, the AHL affiliate of the Tampa Bay Lightning.

22-year-old Guelph Storm graduate Tyler Bertuzzi received the Jack A. Butterfield Trophy as AHL Playoff MVP. The Sudbury, Ont. native finished the postseason with 19 points (9-10–19) in as many games, recording three goals and three assists over six games in the Calder Cup Final. Bertuzzi’s game-tying goal in Game 6 set a new Griffins franchise record for playoff goals as he found the back of the net for the 23rd time in 42 games dating back to 2015. A second round (58th overall) pick by Detroit in 2013, Bertuzzi was an OHL champion with Guelph in 2014, helping guide his team to an appearance in the Mastercard Memorial Cup Final.

Grand Rapids played to an overall playoff record of 15-4, outscoring opponents 73-55. Their run to Calder Cup glory included a 3-0 sweep of the Milwaukee Admirals (NSH), a 4-1 series victory over the Chicago Wolves (STL), a 4-1 semi-final series triumph over the San Jose Barracuda (SJ) and a 4-2 Calder Cup Final win over Syracuse (TB).