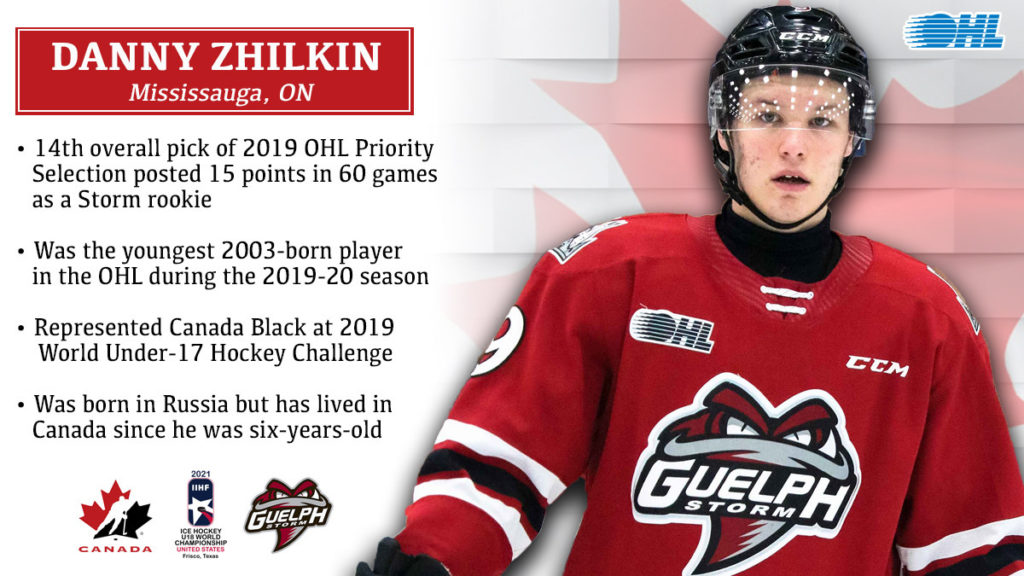 A high-end offensive talent with elite skating ability, Guelph Storm sophomore Danny Zhilkin is among the nine OHL forwards chosen to produce up front for Team Canada at the upcoming U18 Worlds in Texas. The 17-year-old Moscow native will be the first Guelph forward to hold such honours since Cam Hillis in 2018 and will be representing the Storm alongside Mental Performance Consultant Ashwin Patel.

NO TIME WASTED
Guelph’s first round (14th overall) pick in the 2019 OHL Priority Selection and the youngest 2003-born player in the League during the 2019-20 season, Zhilkin recorded a respectable seven goals and eight assists for 15 points over his 60-game rookie campaign with the reigning 2019 OHL Champions. Zhilkin didn’t waste any time making an impression on OHL ice, finding the back of the net in his first shift just 1:30 into his debut.

MARLIES CONNECTION
The Russian-born skater moved to Canada at the age of six and eventually found his groove within the GTHL’s Toronto Marlboros organization. He recorded an impressive 32 goals and 27 points over his 2018-19 minor midget season and looks forward to sporting the maple leaf alongside former Marlies teammates Ethan Del Mastro and Wyatt Johnston.

RETURN TO THE INTERNATIONAL STAGE
Zhilkin will tack on to his previous international experience that includes a stint with Team Canada Black at the 2019 World Under-17 Hockey Challenge and an opportunity to represent Team Ontario at the 2019 Canada Winter Games.

Zhilkin and 12 other OHL players will hit the ice in Plano and Frisco, Texas on April 27th when Canada opens its tournament schedule against Sweden.