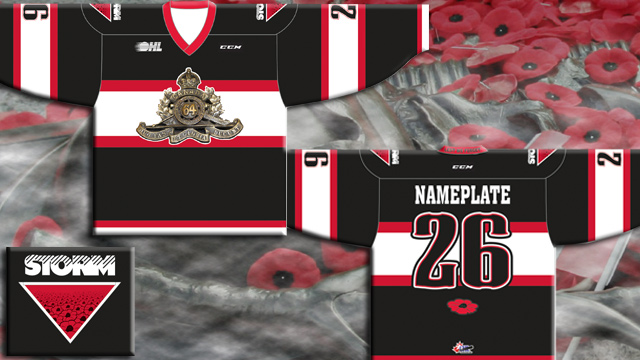 GUELPH, ON – The Storm are proud to unveil plans for the team’s annual Veterans Week game on Sunday, November 9 vs. the London Knights.

In addition to a special pre-game ceremony, the Storm will be wearing one-of-a-kind jerseys to commemorate Canadian veterans, with specific reference to Guelph’s own proud history.

The jerseys worn during the game will be auctioned, with all net proceeds going to fundraising efforts toward the unveiling of a life-like statue of one of Guelph’s most famous sons, Lt. Colonel John McCrae.

The statue has been commissioned by The Royal Regiment of Canadian Artillery to Commemorate McCrae’s contributions as a soldier, doctor and poet.  2015 marks the 100th anniversary of McCrae writing his world renowned poem In Flanders Fields.

“To be part of such a wonderful, local initiative is a huge honour for our hockey club and our fans,” said Matt Newby, the Storm’s Director of Business Operations.

“The statue is important, as is raising awareness of this Canadian icon,” said Lt. Col. Mike McKay, a driving force on the local fundraising committee and retired lieutentant-colonel with Guelph’s 11th Field Regiment. “Thank you to the Storm for contributing to making Canadians aware of him.” 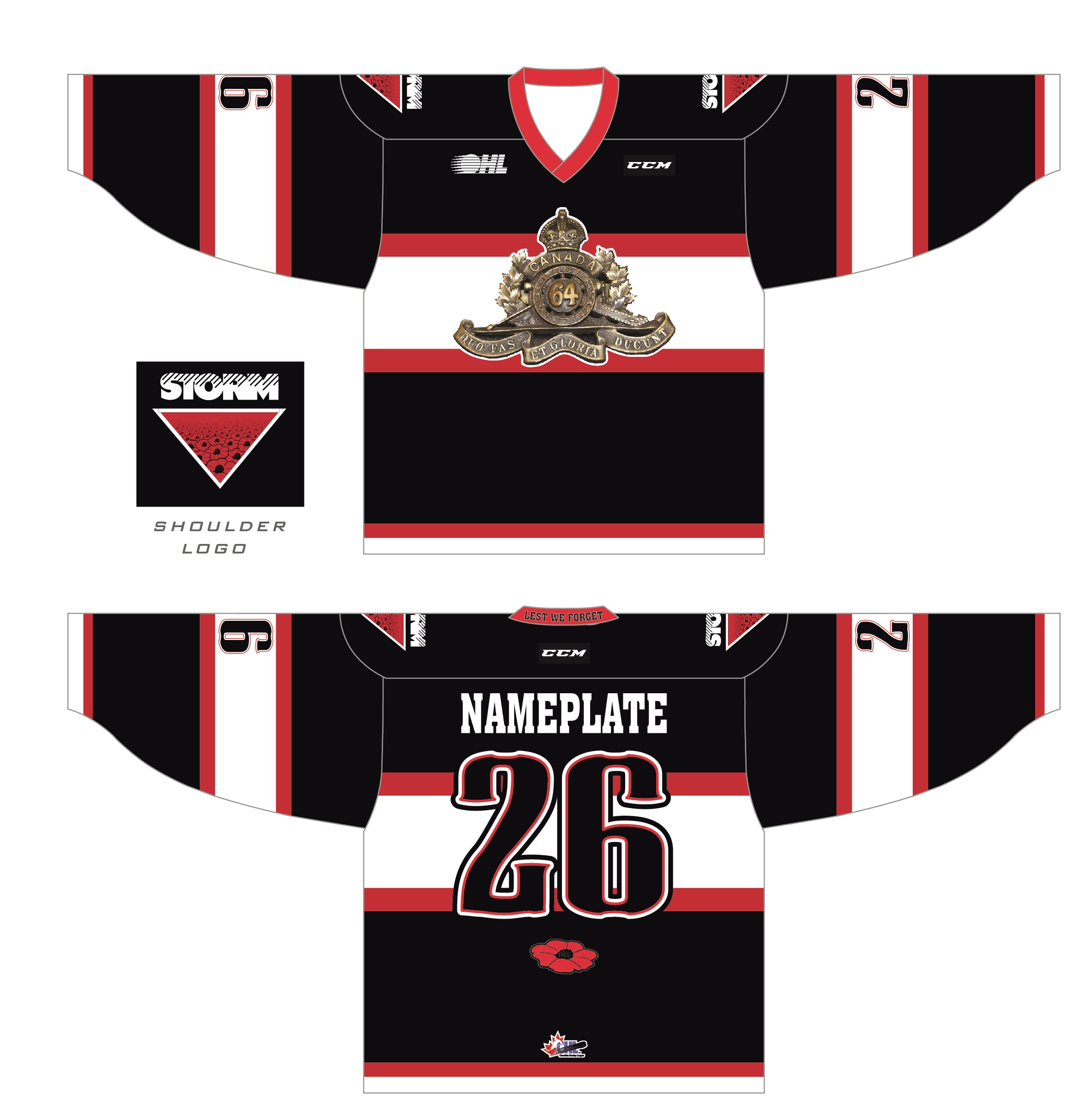 Featured on the jersey will be a reproduction of the logo from one of Guelph’s first junior hockey teams; the 1916-17 64th Battery team.  The logo will jump out atop the sweater’s bold black, red and white colour scheme.  To honour all of Canada’s veterans, the iconic poppy will appear below the back player number, and a “lest we forget” message will appear on the back collar.

On each shoulder, an alternate version of the Storm’s original logo has been designed, featuring a poppy field “row on row” inside the triangle portion of the logo.  The jerseys were designed by the Storm, along with Guelph-based Projoy Sportswear.

“The poppy has become a national symbol in Canada thanks to John McCrae and In Flanders Fields,” said Newby.  “With our tribute jerseys being adorned with poppies, I can’t think of a more appropriate cause for our fundraising efforts.”

The statue is scheduled to be unveiled in June 2015 and will be located in front of the Guelph Civic Museum.  The artisan commissioned with sculpting the statue is Ruth Abernethy, an acclaimed sculptor originally from Lindsay, ON.

For more information on the statue and the legacy of John McCrae, or to make a donation, please visit http://www.lcolmccraestatue.ca/