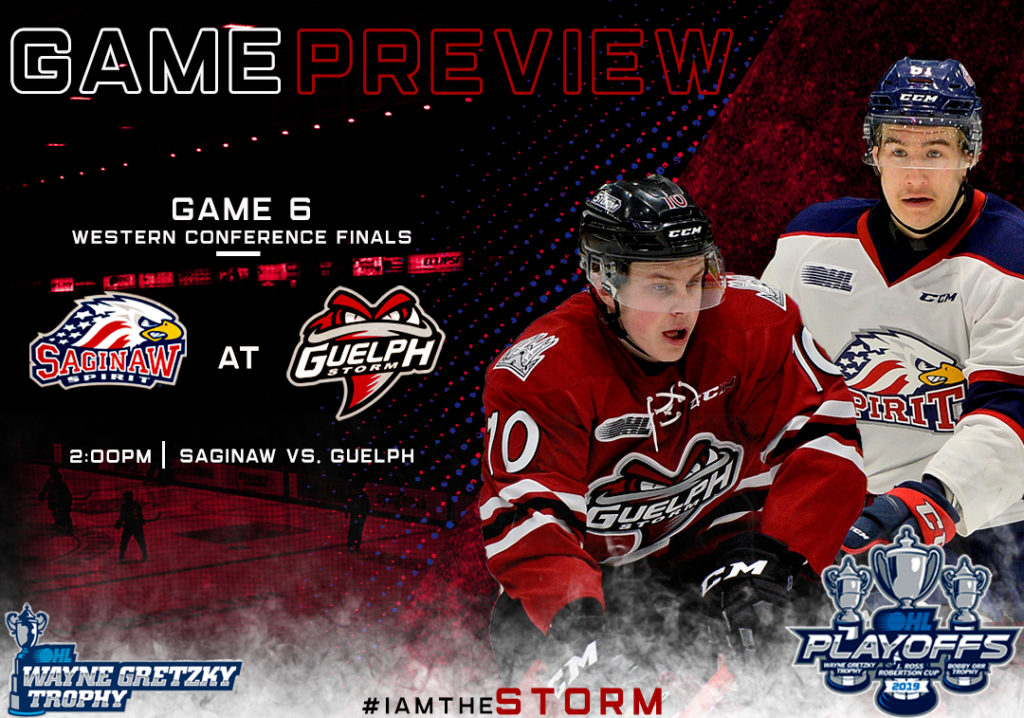 Get Tickets to Game 6: https://tickets.guelphstorm.com

Game 6 of the Western Conference Finals goes Sunday afternoon at 2:00pm as the Saginaw Spirit visit the Sleeman Centre to take on the Guelph Storm.

Saginaw is heading into Sunday’s game leading the series 3-2 after winning games one 7-2, game two 4-3 in OT and winning game four in Guelph 4-1.

The Guelph Storm were able to keep their season alive after winning on Friday evening in Saginaw 4-0, with huge performances from Dmitri Samorukov (3G, 1A), Nick Suzuki (4A) and goaltender Anthony Popovich who made 20 saves for his second shutout of the post-season.

Alexei Toropchenko had a good season for the Storm, as he was able to score 17 goals and 26 assists for 43 points in 62 games. Alexei was drafted by the St. Louis Blues in the 4th round of the 2017 NHL draft and was recently signed by St. Louis to an entry level contract earlier this year.

Cole Coskey had a career season for the Spirit, as he collected 31 goals and 32 assists for 63 points in 52 games during the regular season. In the post-season, Cole has 3 goals and 5 assists in 11 games including 2 goals and 2 assists in the Western Finals against the Guelph Storm.

Get Tickets to Game 6: https://tickets.guelphstorm.com