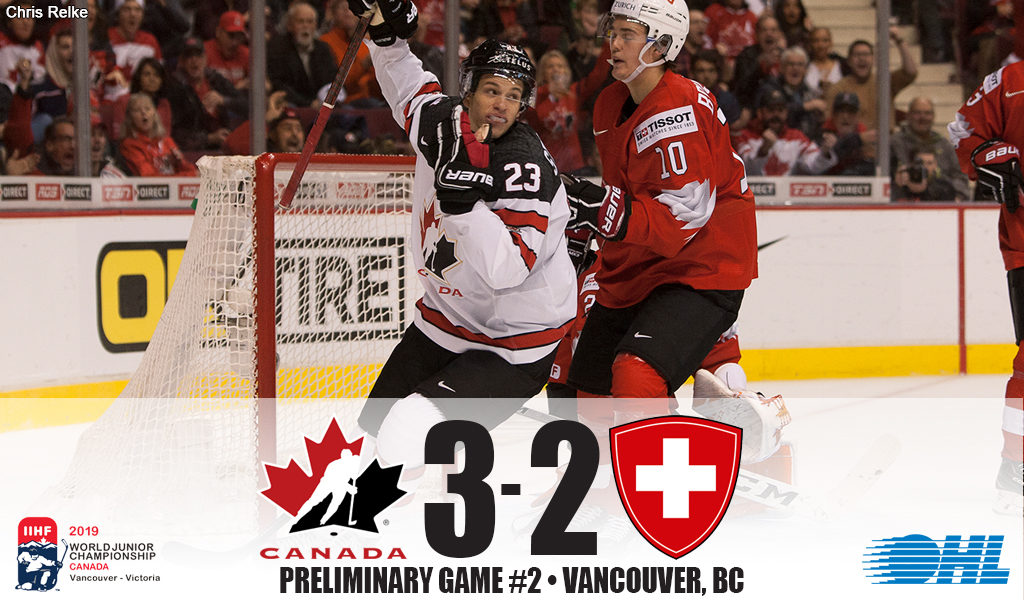 CANADA 3, SWITZERLAND 2
A pair of goals from Chicago Blackhawks prospect Philipp Kurashev (Quebec Remparts) made things interesting, but Canada would narrowly prevail in its second preliminary contest on Thursday, defeating Switzerland 3-2 at Rogers Arena in Vancouver, BC.

“They’re like every team here – they compete and they have pride and they care,” said head coach Tim Hunter. “Their goaltending was pretty good tonight, their penalty killing was good and not a lot of offence for us because of the way they play. We stubbed our toe a few times by turning pucks over, but they’re like all teams here, they compete, they’re well coached, the whole bit.”

Cody Glass (Portland Winterhawks) worked alongside Nick Suzuki (Owen Sound Attack) and Maxime Comtois (Drummondville Voltigeurs) to open the scoring just 36 seconds into the first period. Kurashev would respond 46 seconds into the second to knot the score at one before Canada took out a 3-1 lead before the second frame expired.

Goals from MacKenzie Entwistle (Hamilton Bulldogs) and defenceman Noah Dobson (Acadie-Bathurst Titan) put Canada in the driver’s seat before Switzerland took advantage of a late power play to draw within one.

“When we’re doing things right we control play,” Dobson said post-game. “We all went around the room knowing what we can do better, cleaning up the defensive zone, but at the end of the day playing back-to-back nights we were able to grind one out and get a big win against a really good team that competed hard. We’re happy with where we’re at, but we obviously know we can better and keep improving as the tournament goes on.”

Kurashev scored his second of the night with just 1:49 remaining in the third period, but that’s as close as Switzerland would come as Canada locked down a second straight victory.

Swiss captain Nando Eggenberger (Oshawa Generals) had a pair of assists as his team fell to 0-0-1-1 in the tournament, being outshot 32-17 on the night.

Toronto Maple Leafs prospect Ian Scott made 15 saves to earn the win for Canada before a crowd of 17,102.

Canada returns to action on Saturday against the Czech Republic when the puck drops at 8pm ET/5pm PT.

SWEDEN 5, SLOVAKIA 2
Emil Bemstrom scored a pair of goals to lead Sweden to a second straight win, defeating Slovakia 5-2 in Victoria, BC.

Sweden improves to 2-0-0-0 while Slovakia drops a second straight decision.

Danil Tarasov stopped all 20 shots he faced to record the shutout while Romanov finished with a goal and two assists, Klim Kostin had a pair of helpers and blueliner Alexander Alexeyev (Red Deer Rebels) tallied an assist of his own.

FINLAND 5, KAZAKHSTAN 0
Finland carried the play, outshooting Kazakhstan 56-18 in a 5-0 victory in Victoria, BC to rebound from a tournament-opening loss on Wednesday.