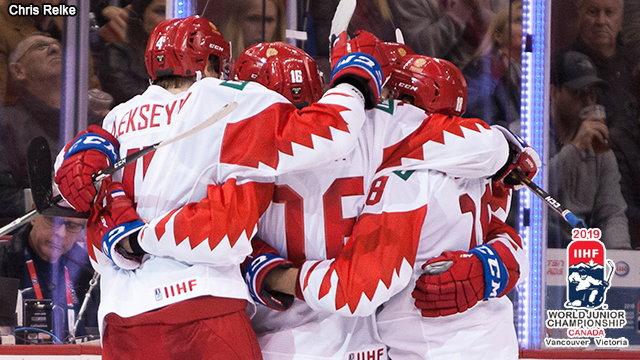 RUSSIA 7, SWITZERLAND 4
Switzerland climbed out to a 2-0 lead in the opening half of the first period and led 3-1 early in the second before Russia woke up and skated to a 7-4 victory to remain undefeated at the 2019 World Juniors.

Marco Lehmann scored twice for the Swiss while Valentin Nussbaumer (Shawinigan Cataractes) had a goal and an assist. Yannick Bruschweiler also found the back of the net as Switzerland was outshot 41-31.

Russia improves to 3-0 headed into a New Year’s Eve showdown with Canada while Switzerland wraps up preliminary play with a 1-0-1-2 record.

SLOVAKIA 11, KAZAKHSTAN 2
Slovakia earned its first win, scoring a commanding 11-2 win over Kazakhstan in Victoria, BC.

Artur Gatiyatov scored both goals for Kazakhstan as they were outshot 46-18 and round out the preliminary round with an 0-0-0-4 record.

The win punches Slovakia’s ticket to the quarter-finals where they will face the winner of Monday’s New Year’s Eve clash between undefeated Canada and Russia.