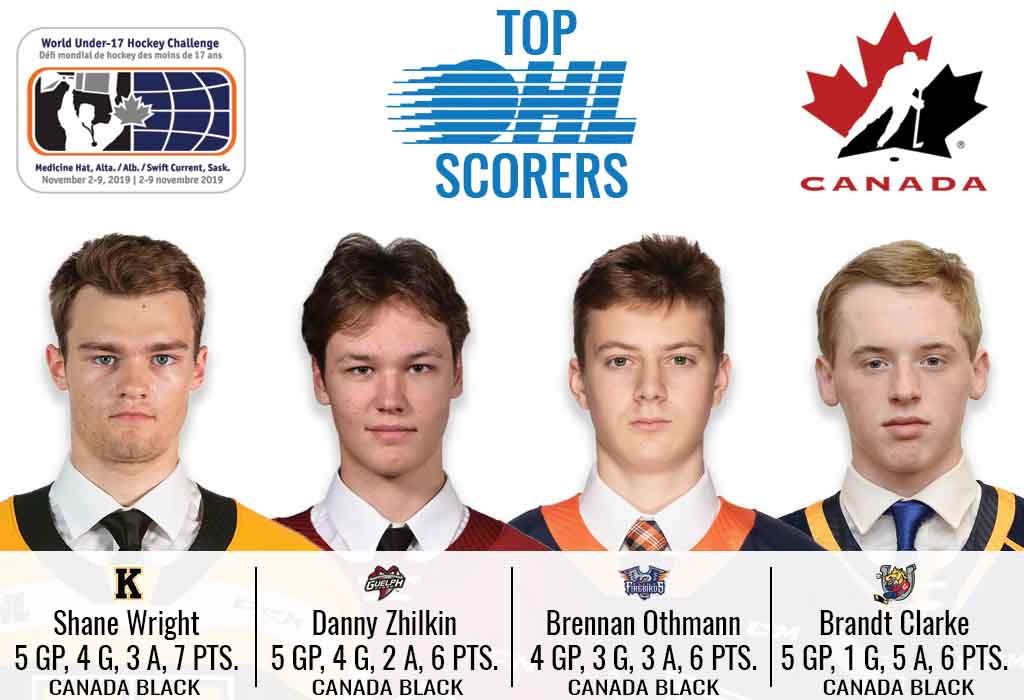 It may not have been the finish they had hoped for, but OHL talent was on full display at the 2019 World Under-17 Hockey Challenge this past week in Medicine Hat, Alta. and Swift Current, Sask. The OHL was well represented with a total of 24 players competing. In case you missed it, here’s a quick recap of the OHL action throughout the tournament:

Canada White was victorious over the Czech Republic in a thrilling 5-4 overtime win on Day 3. Danny Zhilkin (Guelph Storm) earned a couple of goals for Canada Black while Brandt Clarke (Barrie Colts) scored the shootout winner. Canada Red fell to Sweden 4-2, outshooting them 54-34, with a late period goal from Lockhart.  Jack Beck (Ottawa 67’s) registered a goal in Canada White’s 6-4 loss to the United States.

Day 4 saw the end of the preliminary round, with all three Canadian teams claiming victory and advancing to the quarter-finals. Zhilkin scored the tying goal for team Canada Black in a tightly fought match against the United States, and Wright scored the overtime winner to power his team to a 5-4 win, securing second place. Othmann, Clarke, and Ryan Winterton (Hamilton Bulldogs) had a goal each, while goaltender Benjamin Gaudreau (Sarnia Sting) stood tall in net with 29 saves. Canada Red dominated Finland 7-2, with OHLers Wyatt Johnston (Windsor Spitfires), Braeden Kressler (Flint Firebirds), Connor Punnett (Saginaw Spirit), teammate Josh Bloom (Saginaw Spirit), and Lockhart picking up assists. Canada White came out on top, blanking the Czech Public 3-0 to wrap up the prelims.

He is just the 6th player to earn exceptional status and play @CHLHockey as a 15-year-old.

But what makes Shane Wright exceptional is just as much about who he is off the ice as what he does on it.#WorldU17 | @shane_wright51 | @KingstonFronts | @DMFlyersAAA pic.twitter.com/TZHjLfAIAf

In quarter-final action, Canada White came out on top with a 3-2 edge over Canada Red thanks to overtime hero Chase Stillman (Sudbury Wolves) with 28 seconds left. Canada White advanced to the semi-finals where they would face the United States, while Canada Black’s medal hopes were crushed by Russia in an 8-4 loss.

Canada White’s run was ultimately ended by the United States in a 7-3 loss in the semi-finals. The squad was down 4-0 midway through the game and was unable to catch up to their opponent’s seven-goal showing. Stillman picked up an assist in the loss.

The Czech Republic defeated Canada White 3-2 in overtime for the bronze, scoring the winner with just 14.4 seconds left. Brett Harrison (Oshawa Generals) picked up a shorthanded goal while Stillman earned an assist. Canada Red dominated Sweden 6-2 for fifth place, garnering a 3-0 lead in the opening half and maintaining the advantage with goals from Johnston and Franceso Pinelli (Kitchener Rangers). Finland excelled over Canada Black 8-4, resulting in an eighth place finish to Canada Black after what had been a 3-0 start to their tournament.

Russia took home the gold, defeating the United States 6-2 in the final

For full coverage of the 2019 World Under-17 Hockey Challenge, visit hockeycanada.ca.