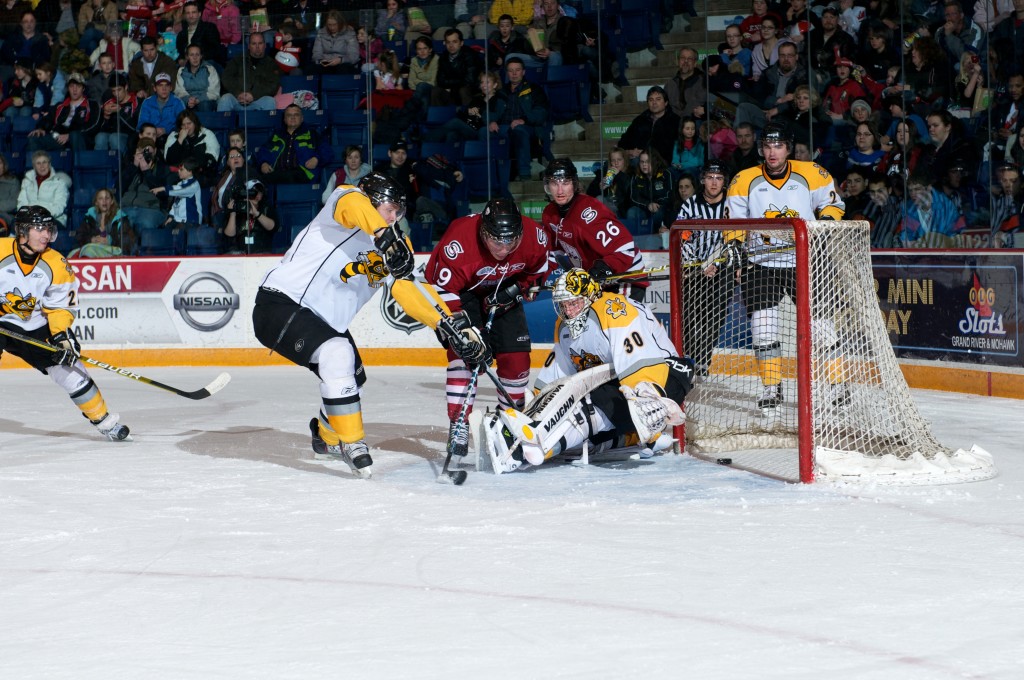 The Storm travelled to Sarnia on Saturday night to face the Sting as they look to continue their late game prowess from Friday night.The Storm jumped out to an early 3-1 lead in the first, but penalty trouble led to a Sting comeback in the second. Taylor Beck would score the eventual winner at 14:26 of the third.

The Sting took an early lead as Brandon Francisco tallied first just 2:85 into the opening frame. The Storm countered scoring three off the sticks of Holland, Carroll and Sisca. Taking a two goal lead into the second intermission, the Storm outshot the Sting 11-10.

Riddled with penalties, the middle frame saw nine players make the trek to the sin bin. All four goals recorded in the second, were on the powerplay. Sarnia scored three straight with the man advantage tying the game at three and eventually taking a one goal lead.  Tyler Peters took a good feed from Yakupov to beat Brandon Foote for the go ahead goal. It wasn’t long before the Storm would counter and pull even with the Sting. With Joe Ragolski in the box for high sticking, Taylor Beck capitalized scoring at 14:11 of the middle frame. Outshot 11-4 in the second, the two teams would head into the final frame with the score knotted at four.

With only one penalty called in the third, the two teams were allowed to play at full strength for the majority of the third. Taylor Beck scored the eventual game winner late in the third when Michael Latta intercepted a Sarnia clearing attempt and passed it out front right to Beck who made no mistake and one timed it past John Cullen. The Storm would hold off the pressing Sting late in the third to take the two points and the 5-4 victory. Shots in the third were 15-13 for the Storm.

Final shots on net were 34-30 for the Sting. With all three goals scored on the powerplay, the Sting were 3/10 with the man advantage while the Storm capitalized once with the extra attacker.

With the game winning marker, Taylor Beck was named the 1st star of the game, while Sting forwards Alex Galchenyuk and Brandon Francisco were the second and third stars respectively.

Next up, the Storm take on the Erie Otters at the Sleeman Centre on Friday, October 8th at 7:30pm. Tickets are still available and can be purchased by visiting or calling the Guelph Storm Box Office at 519-837-9690.