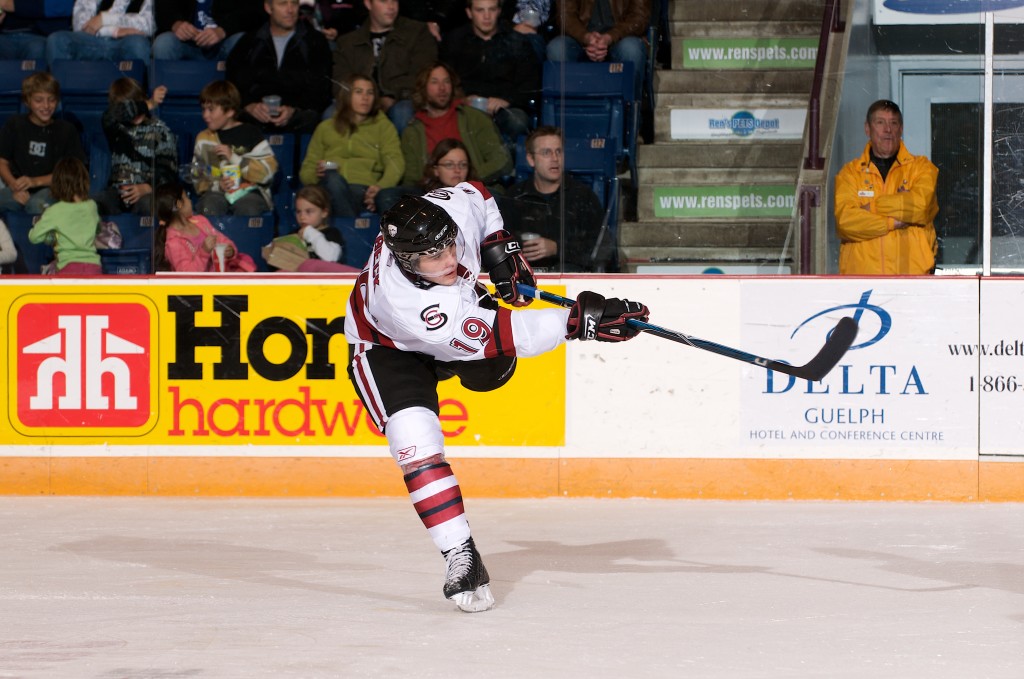 Friday night, the Storm hosted the Erie Otters in a Midwest Divisional tilt.  Looking to put the brakes on a three-game losing streak, the Storm dug themselves a four goal hole before pulling even with four unanswered in the third to force overtime.  In the extra frame, Andrew Yogan spoiled the comeback bid with a rebound goal to give the visitors a 5-4 win.

Cody St. Jacques got the nod in net for the contest and played well in the first frame despite a couple of Otters goals.  Greg McKegg opened the scoring moments after the Storm failed to clear the zone on a broken stick at the blueline.  Erie quickly countered with two quick passes and McKegg finishing past a sprawling St. Jacques.  The Storm had a few chances to tie the game including Michael Latta in tight with just over four minutes to play in the period.  Making his return from a shoulder injury, Latta couldn’t bang a loose puck past Ramis Sadikov and the Otters turned the play around for a quick two-on-one opportunity.  Andrew Yogan would out wait the Guelph blueliner and slide it across the slot to Anthony Luciani (pictured) for  a one-timer.  Shots on goal in the first were 15-12 in favour of the visitors.

The second period was another tough one for the Storm as they gave up two more Erie goals without a reply.  With Ben Chiarot in the box for cross checking, the Otters powerplay would make it 3-0 on a Tyler Hostetter point shot that was deflected by David Shields in front of St. Jacques. Then just past the mid-way mark of the middle twenty, Luciani would notch his second of the game and third point grabbing a neutral zone turnover and snapping a shot off the rush through the legs of St. Jacques.  The Otters fired 14 shots on the Guelph goal in the second compared to 11 by the Storm.

Down four with only thirteen minutes to play, Guelph would never give up and pulled even with four straight goals.  Connor Tresham got the comeback started when he deflected a Ben Chiarot shot past Sadikov at 7:09.  Just over a minute later, Taylor Beck won an offensive zone faceoff that made it to the net and was quickly tucked in by Peter Holland for his seventh of the campaign.  The two goal lead was short lived thanks to the Storm powerplay.  Taylor Beck would fire a shot from the top of the circle that Sadikov couldn’t handle and this time Latta made no mistake with the rebound burying it for his eighth.  Only 40 seconds later, JP Labardo would make it four goals in 5:20 and lift the hosts into a 4-4 tie and electrify the crowd.  After some nice work behind the net by Cody McNaughton, Carter Sandlak jumped on a rebound and Labardo would finish the job with his second of the season.  With a four goal outburst, the Storm owned a huge edge in shots in the third outshooting the Otters 15-5.

The overtime proved exciting with Guelph generating the early chances and the Otters striking the finishing blow.  Yogan would pounce on a rebound in tight and slide it past St. Jacques to make it a 5-4 final.

The Storm will welcome another divisional foe in less than 24 hours when the Kitchener Rangers come to the Sleeman Centre for a rare Saturday night date.  Tickets are on sale by calling or visiting the Guelph Storm box office or online at GuelphStorm.com.