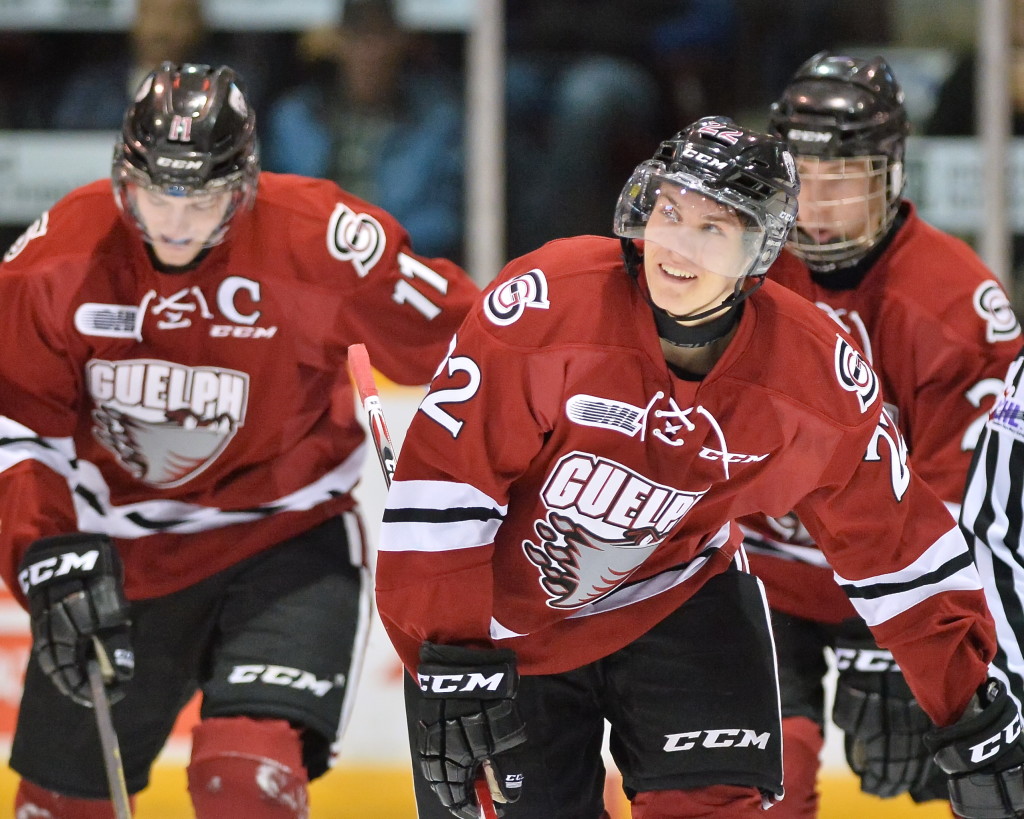 The Guelph Storm downed the Sudbury Wolves by a score of 5-3 on Friday, earning their fourth win in a row.

Jason Dickinson and company won their fourth game in-a-row in Sudbury on Friday night, downing the Wolves by a score of 5-3. Dickinson led the way for the Guelph Storm, recording a three-point (one goal, two assists) night for first star honours.

Justin Nichols, the third star on the game, backstopped the defending champions to the win in his 12th consecutive start, turning away 39 of 42 shots.

The Guelph Storm came out of the gates on a mission, with Sudbury native Tyler Bertuzzi wasting no time in finding the back of the net. Merely 18 seconds into the contest, Bertuzzi attempted to make a pass to Robby Fabbri, but the puck would slide past Samuel Tanguay to give the visitors an early 1-0 lead. The goal would be Bertuzzi’s 14th of the season, and the fourth of his career in Sudbury.

Still applying great offensive pressure, Dickinson would fire one in from the slot to put the Storm ahead by two. Pius Suter would notch the assist on the goal.

Less than two minutes later at the 7:11 mark, it would be sophomore Adam Craievich with the pretty set up play to Chadd Bauman for his second of the season.

The change in the blue paint proved to provide a spark for the Wolves with captain Brody Silk getting the home squad on the board.

Sudbury continued to push back causing Nichols to come up with several big saves in the second half of the period.

At the 9:45 mark of the first, Tyler Boston would get called for tripping, giving the Wolves their first power play of the game. Sudbury, unable to capitalize, came fairly close to grabbing a second tally, ringing one off the post. Nichols would sprawl back just in time to keep the score at 3-1 for the Storm.

Nichols continued to put on a show, coming up with a huge point-blank save as Wolves’ Travis Wood took advantage of a Storm turnover, feeding Matt Schmalz for a breakaway.

The Storm goaltender would have more to fend off later with Fabbri getting called for high sticking with Marc Stevens already in the box. On the five-on-three advantage, the Wolves would fire a shot off the post for a second time in the period, followed by more timely saves by Nichols.

Nichols’ best save of the first came with minutes remaining, snagging a puck out of the air as he flashed the glove.

Despite being outshot 16-15 in the period, with just 22 seconds left, Dickinson extended Guelph’s lead to 4-1 off a nice feed from Fabbri for the captain’s second of the game.

After the first 20 minutes featured great offensive efforts, the middle frame had special teams play at work. A total of 16 penalties were handed out, including two instances of four-on-four hockey for a full two minutes.

At the 6:45 mark, Garrett McFadden would be awarded two for interference, and with Bauman already in the box serving a two-minute goalie interference penalty, the Wolves would have their second five-on-three advantage of the game for a duration of 14 seconds.

Negating the power play, the Wolves would be called for too-many-men, a penalty served by Pavel Jenys.

Sprung out of the box, Jenys would jump ahead on a two-on-one rush with Nathan Pancel. Jenys would feed Pancel who made no mistake to slide the puck through Nichols’ five-hole at the 10:48 mark.

The period continued with end-to-end action, however, both Timpano and Nichols ensured the score remained locked at 4-2 with incredible play between the pipes at either end.

With only seconds remaining in the second, Bertuzzi would jump ahead on a breakaway only to be brought down by Conor Cummins with a solid defensive effort.

To end the period, players exchanged some words and hugs, evidently with no love lost between the cross-conference teams.

The final 20 minutes would begin with immediate pressure from the Storm as Harpur found Fabbri for the breakaway. Timpano would keep his team within two, however, turning Fabbri’s quick attempt away.

At the 2:54 mark, Garrett McFadden would be sent off for cross checking, giving the Wolves their sixth power play of the game. Finally capitalizing on the man advantage, Matt Schmalz would tip a point shot fired by Kyle Capobianco to bring Sudbury within one.

Following the goal, the Storm would turn right back to the offence as Tyler Boston had a great opportunity, sliding the puck just wide of the Sudbury goal.

Fabbri would be next firing a quick rocket on Timpano, but the Wolves’ netminder would keep the home squad in the game with a flashy glove save.

Shortly after the play at the 14:24 mark of the period, Suter would put on the jets to skate around Sudbury’s defenseman to pocket his 15th goal of the season, and give the Storm a 5-3 lead. Dickinson would assist on the tally.

Unable to recover from the goal, the Wolves were chasing down Suter who had an empty net ahead of him with seconds left. The Swiss Assassin would be looking sideways, however, hoping to feed Fabbri for the solidifying goal. Suter would be tripped up, though, and Silk would deliver a late hit, causing the contest to end with the Storm on a five-on-three advantage.

With a 5-3 score, the Storm took their fourth win in a row over the Wolves on Friday night, and now look ahead to Saturday’s match-up against the Sault Ste. Marie Greyhounds.

Fabbrilous: Robby Fabbri has now registered points in ten of 12 games in the month of November with two assists against the Wolves tonight. With a fifth consecutive multipoint effort, the St. Louis Blues prospect has now compiled 25 points (12 goals, 13 assists) over the course of the month.

Bert plays big in hometown: Tyler Bertuzzi, with the opening goal of the contest, now has four career goals in six games against the Wolves, all scored in Sudbury. Bertuzzi also extended his strong play in the month of November to 19 points (eight goals, 11 assists) in ten games played.

In the crease: Justin Nichols appeared in his 12th consecutive start between the pipes for the Storm tonight, turning aside 39 of 42 shots.

Sudbury Shots: Despite the 5-3 victory, Sudbury outshot Guelph two out of three periods of play for a game total of 42 in comparison to the Storm’s 34.

On the road: Tonight’s 5-3 win marks the first time this season that the Storm have won on the road by more than a one-goal margin. All previous five road victories have been one-goal results.

Bench Bosses: For the second straight game, Todd Harvey and Bill Stewart ran the Storm bench in Sudbury. The Storm assistant coaches will do so again on Saturday in Sault Ste. Marie as Head Coach Scott Walker did not join the team on the northern road trip due to illness.

Sicoly in the Soo: Guelph’s fourth round pick in the 2014 OHL Priority Selection, Nicolas Sicoly, will be in the line up for the Storm on Saturday in Sault Ste. Marie wearing No. 24. Sicoly is currently playing for the Soo Thunderbirds of the NOJHL.