Knights at Storm… after 20 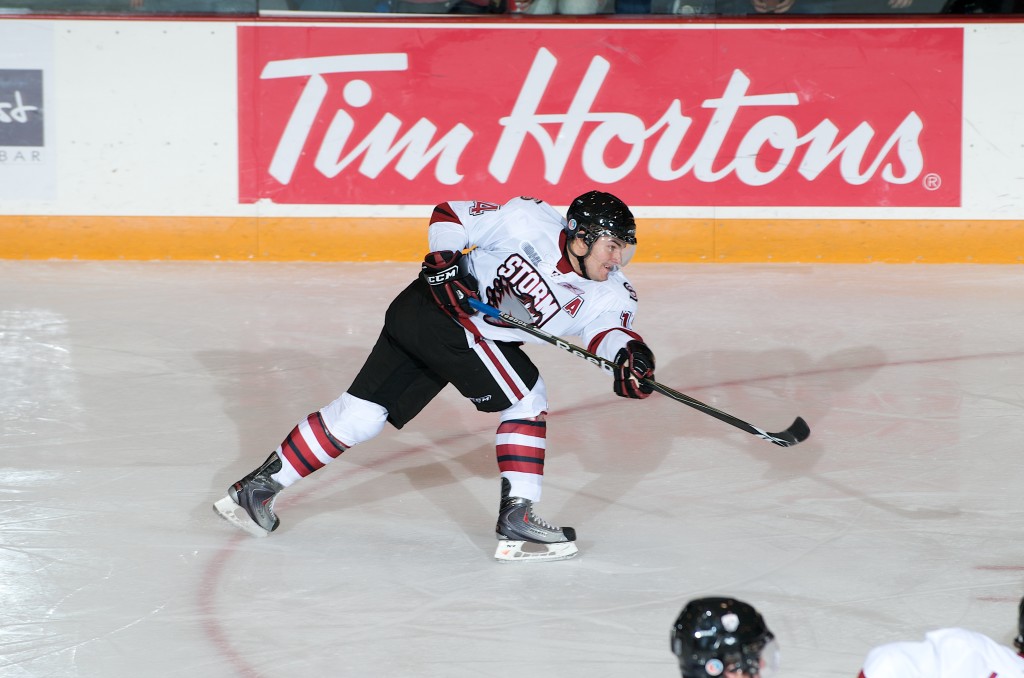 Monday afternoon in front of a near sell-out at the Sleeman Centre, the Storm surrendered three straight and couldn’t dig themselves out of the hole falling 3-1 to the visiting Knights.

After dropping a 6-2 decision on Saturday night in Owen Sound, Guelph was looking for a rebound performance on Monday afternoon, but early penalty trouble put them down 2-0 in the first period.  Former Storm winger Leigh Salters started the Knights scoring on the man advantage deflecting a Colin Martin shot past Brandon Foote.  Nearly seven minutes later the visitors doubled their lead to 2-0 on Justin Taylor’s 29th of the year off the rush with a wrist shot that beat Foote.

Goalie Michael Hutchinson wasn’t busy in the first period with only five Storm shots and few quality scoring chances, but in the second the fourth-year netminder made several great stops to keep Guelph off the board through forty.  At the other end, Foote was solved one more time on a delayed penalty call when Michael D’Orazio ripped a slapshot between the Storm goalie’s legs from the faceoff circle.

The powerplays evened out in the last 33 minutes with the Knights tagged for five straight minor penalties, but the Storm couldn’t capitalize and the score remained 3-0 with under ten minutes left in regulation.  Guelph finally got on the board with just 5:37 to play cutting the lead to 3-1.  Conor O’Donnell notched Guelph’s first of the game grabbing the rebound off a Sam Lofquist point shot and backhanding it under Hutchinson. Despite some late pressure, that was as close as the Storm would come dropping a 3-1 final.

The Storm hits the road for a tough three-in-three this weekend beginning Friday night in Kitchener.  On Saturday the team will board the bus for Sudbury before wrapping up the week in Sault Ste. Marie on Sunday evening versus the Greyhounds.  Next home action for Guelph will be Friday, February 26th when the Peterborough Petes come to the Sleeman Centre for a 7 pm start.  **PLEASE NOTE THE 7 PM START FOR THE FRIDAY NIGHT GAME VERSUS PETERBOROUGH.