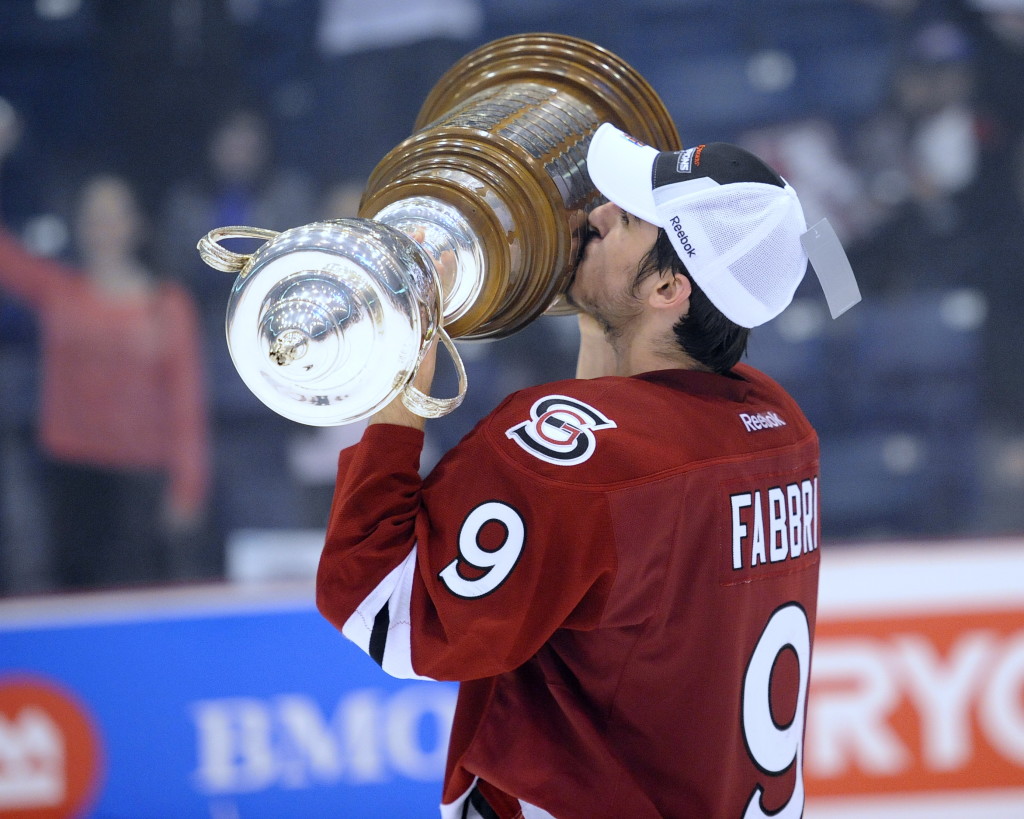 The reigning Ontario Hockey League Champions and Memorial Cup finalists were treated to a short offseason this past summer.

In addition to the 2013-14 season success, many Guelph Storm players attended NHL Rookie and Development camps, along with a handful of extended invitations to Hockey Canada’s U20 Summer Development Camp.

Of all the returning players in 2014-15, Robby Fabbri may have been the busiest.

After a remarkable breakout sophomore season tallying 45 goals and 87 points in just 58 games, it seems the OHL Playoff MVP’s offseason didn’t bother to show up at all.

On May 25, the Storm suffered a heartbreaking 6-3 Memorial Cup final loss to the WHL’s Edmonton Oil Kings. It was a game they won’t soon forget.

Looking ahead to the upcoming season, Fabbri wants to build on the experience.

“It shows what it takes, how to pull together. You know now how hard it is right until the very end,” the 5’10”, 165lbs centre explained. “You can use that at any point in your career to get over adversity or to help become a better player.”

An experience matched with a mature perspective that surely didn’t go unnoticed just over a month later on June 27 when the St. Louis Blues selected Fabbri 21st Overall in the 2014 NHL Entry Draft.

“Not only getting drafted, but getting to celebrate with my family and all the people who have been a part of it the whole way,” Fabbri said of his most memorable moment from these past few months. “And to such a great organization with St. Louis – it’s a great spot to continue my career.”

Heading into the draft, the motto of ‘no expectations’ was held at high importance.

“You only get drafted once. For myself and [family and friends], we didn’t want the moment ruined by expectations,” Fabbri explained. “We just wanted to make it memorable, and I think we did a really good job of that.”

Following the NHL Draft came the St. Louis Blues Development Camp, an experience that offered some welcomed perspective for the young prospect.

“It’s knowing that this is just the start,” Fabbri said of the main thing he took away from the camp. “Everything that’s happened in the past is good, but you gotta start proving yourself again – taking your training to the next level, in the gym, how you eat, or on the ice, it’s all important.”

While No. 9 was absorbing the beginning of his NHL career, he was rewarded for the hard work and success in his current junior career with an invitation to Hockey Canada’s U20 Summer Development Camp. Teammates Ben Harpur, Tyler Bertuzzi, and Jason Dickinson were also invited, with Storm Head Coach Scott Walker named as one of Team Canada’s assistant coaches.

Despite the familiar faces, Fabbri entered the camp with one goal in mind.

“I was just trying to prove myself,” he explained. “There’s always that comfort level when you have your teammates there, but I just wanted to make sure I went in with the same attitude whether Walks was the coach, or I was playing with teammates.”

In two games played for the red and white, Fabbri registered one goal and two assists.

Looking back on it all, the “Fabbrilous” star feels he has grown as both a player, and a person.

“Every stepping stone of my career teaches me something new,” Fabbri said. “Whether it’s Guelph, St. Louis, with Hockey Canada, it just all adds up to helping me with my attitude on and off the ice, and how I treat hockey now as my career, and my life.”

With a refined perspective, Fabbri understands the challenges this new Storm team faces heading into the 2014-15 season.

“We want to come together and be as close as we were last year,” Fabbri said of what he believes to be the starting point for the Storm this upcoming season. “We lost quite a few of our vets and the leadership group we had. It’s up to us older guys here now to show these younger guys we’re playing to defend the trophy.”

Individually, the swift centre is always looking to improve his game.

“There’s always room for improvement in any part of your game, but you have to be as good away from the puck as you are with the puck. That’s a big one I always try to focus on.”

Off the ice, Fabbri recognizes and welcomes the new responsibility this season will bring.

“With our leadership group leaving, it’s definitely going to be a bigger role for myself this year,” he explained, “I think I’ve earned it and I want to be apart of that group for the younger guys and for the team.”
As the pre-season progresses, there are a lot of questions left to be answered, most pertaining to the amount of roster spots open for new names.

However, there is one thing for certain.

“Our next goal is to win it again,” Fabbri said.

The quest begins September 26 as the Storm open the season at home vs. the Belleville Bulls at 7:30pm.