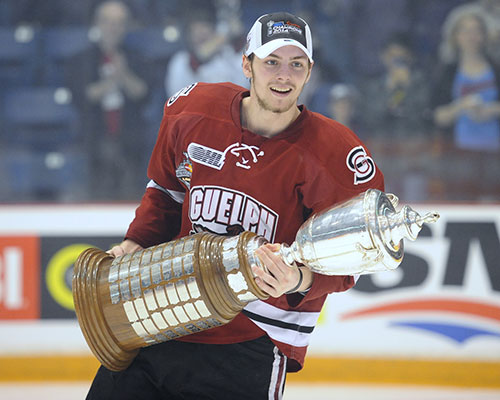 After getting selected 29th overall in the first round of the 2013 NHL draft, Dickinson attended rookie camp before he returned to Guelph last year. In 2014 the 19-year-old attended main camp with Dallas.

“On day one I was practicing on a line with Jamie Benn and he just flew up and down the ice,” Dickinson said. “The first practice allowed me to see that first line in the OHL is not quite the same as even the second or third line in the NHL.”

Admittedly, at the onset of camp, Dickinson was hesitant and he felt his way through the first few days until he got comfortable.

“It just makes it all so much more realistic and that this is the NHL calibre players that you want to play with, play against and battle for ice time with. And be playing with eventually,” Dickinson said.

Once settled in the Georgetown, Ontario native was trying to push for a long look and a roster spot.

Dickinson put forth a strong effort in his first of two pre-season games on Monday, September 22. He scored a goal on his only shot in over 13 minutes of ice time and was named third star in his first pre-season game, a 4-3 Stars win over St. Louis.

And four days later Dallas travelled to Tampa Bay and Dickinson saw time against one of the best players in the NHL, Steven Stamkos.

“I took a couple face-offs against Stamkos and I thought our line did just fine against him. All that was going through my head was not letting him get to the net, honestly. My main focus was shutting him down and not giving him any opportunities,” he said.

What stood out most to Dickinson about Stamkos was the ease with which he is able to play the game.

“He’s so calm with everything, he didn’t rush plays and made such simple plays that were so effective, anybody could make them, but he sees it happen.”

“We were talking about how camp went, the year coming up and what their expectations are.” Dickinson explained.

Nill has a track record of allowing young players to develop naturally at their own pace and not pushing too hard, too fast.

“It’s probably best for me,” Dickinson said. “One day I definitely think I will be in the NHL.”

On Sunday, September 28 Dickinson was officially sent back to the Storm for the 2014-15 OHL season. And with his NHL training camp experience he believes he can play at a higher level for Guelph this year.

“I feel stronger and faster than most of the guys in this league, so I think I have an advantage there.” Dickinson said.

“I can see myself being an NHL player. So if I play like an NHL player in the OHL it will be beneficial for me so that I play at that speed now and get that in my game right away.”

Storm head coach Scott Walker thinks Dickinson will be a real good long-term pro at the NHL level, but he cautioned his star centreman about returning to the OHL.

“Some kids comeback and think it’s going to be easy because they were at an NHL camp. You really have to respect our game,” Walker said. “But with Jason’s skill set and mentality he’s come back and worked extremely hard and it’s been contagious.”

Walker said Dickinson should be one step ahead of the game or it should be one step slower for him because of his NHL training camp experience. And for the same reason Dickinson expects a career-best year from himself for the Storm as he continues to grow into a future NHLer.