From the Stands: Captain, Storm fighting for home ice 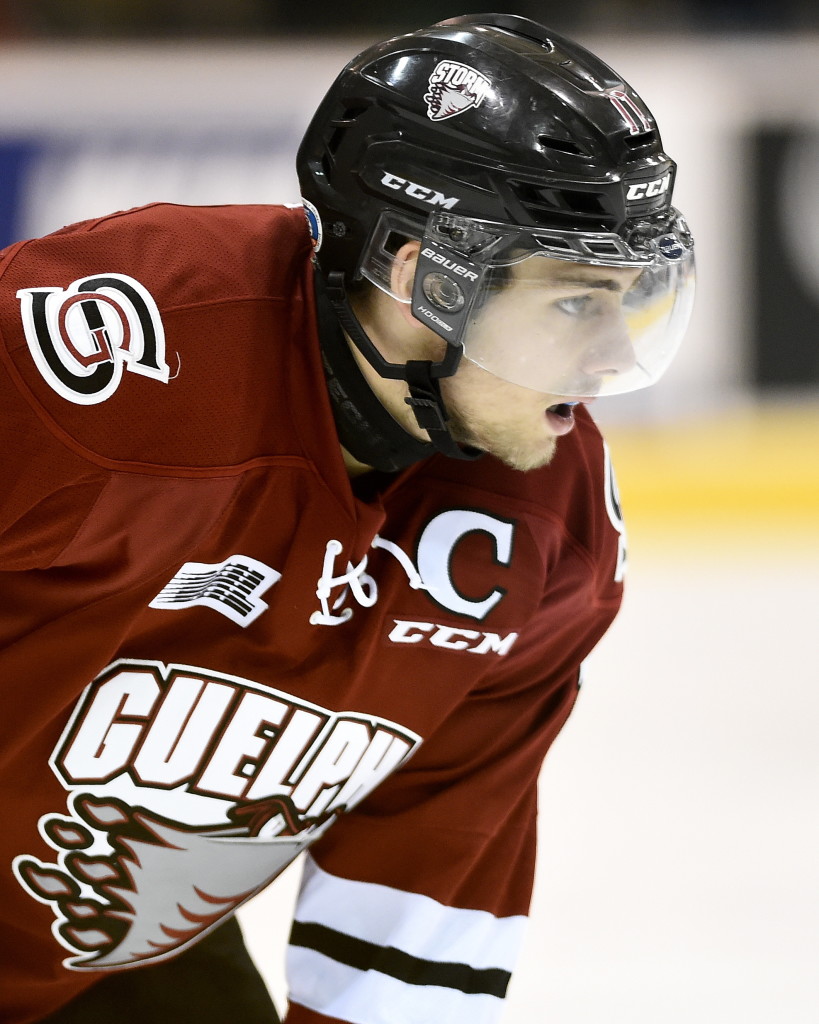 The leadership skills of talented Guelph Storm captain Jason Dickinson will need to shine from here on in.

He will be in Irish green tonight as the home side hosts the Kitchener Rangers in a game that will have a huge impact on the standings.

The Storm have just three games left in the regular season (all at home) and the Rangers, with a game in hand, sit just four points back of the Storm and one point behind Owen Sound. The Storm hosts the Attack Friday night.

“We don’t want to leave anything to chance,” said Dickinson, happy that the Storm has their destiny in their own hands.

“I think there has to be a certain swagger in your game at this point of the season. You need to own it now.”

If the Storm can win their next two games they will clinch fourth place and home ice advantage in the first round of the playoffs, playing either Owen Sound or Kitchener in the first round. (The Storm could technically still catch London, but it’s a long shot).

“That’s huge,” said Dickinson in reference to home ice advantage. “We’ve been pushing for that all season. When Fabs (Robby Fabbri) got hurt and guys were in and out of our line-up we were doing everything we could to get fourth place. It’s not like we weren’t trying to catch London (in third) but we wanted to make sure (we at least stayed in fourth). Our record on the road is not great (16-17-0-1) so it’s a huge factor getting home ice.”

You can throw a blanket over London, Guelph, Kitchener and Owen Sound but you wonder if Guelph’s long playoff run last year will give them any sort of an edge.

“I think it’s invaluable,” said the Storm captain, who will have the name O’Dickinson on the back of his jersey tonight in honour of St. Patrick’s Day.

“I think that experience will stay with you forever in your career. You learn to be smart and show resiliency in a long playoff run and you know what you need to do to be ready night in and night out. You learn that to go far, you have to be ready to play every day . . . you can’t just show up every now and then.”

For players like Dickinson, Tyler Bertuzzi, Fabbri, Chris Marchese and Luke Cairns, this is their last kick at the can in the Ontario Hockey League and you would think that the success of last season left a burning hunger to go on another long run this season.

For most of the season the club had a strong defensive corps and great goaltending from Justin Nichols. Nichols remains but the loss of veterans Zac Leslie (shoulder surgery) and C. J. Garcia (knee injury) has changed the dynamic somewhat.

The good news is that the Storm can now throw out two high-powered lines that can compete with anyone.

It will be tempting to win games 6-4 but in the playoffs if you can’t commit yourself to short shifts and playing some defence, you will be found lacking in a hurry.

In many ways, the playoffs start tonight as teams jockey and battle for home ice advantage.

From the Land of Oz . . . Look for rookie defenseman Austin Hall to re-enter the line-up tonight after being out with a leg injury since Christmas . . . C. J. Garcia is listed as “probable” for Friday’s game against Owen Sound . . . The Storm has a nine-game regular season sellout streak going – the longest in franchise history . . . Guelph hosts Kitchener tonight at 7 p.m. at the Sleeman Centre.