From the Stands notices-announcements transactions 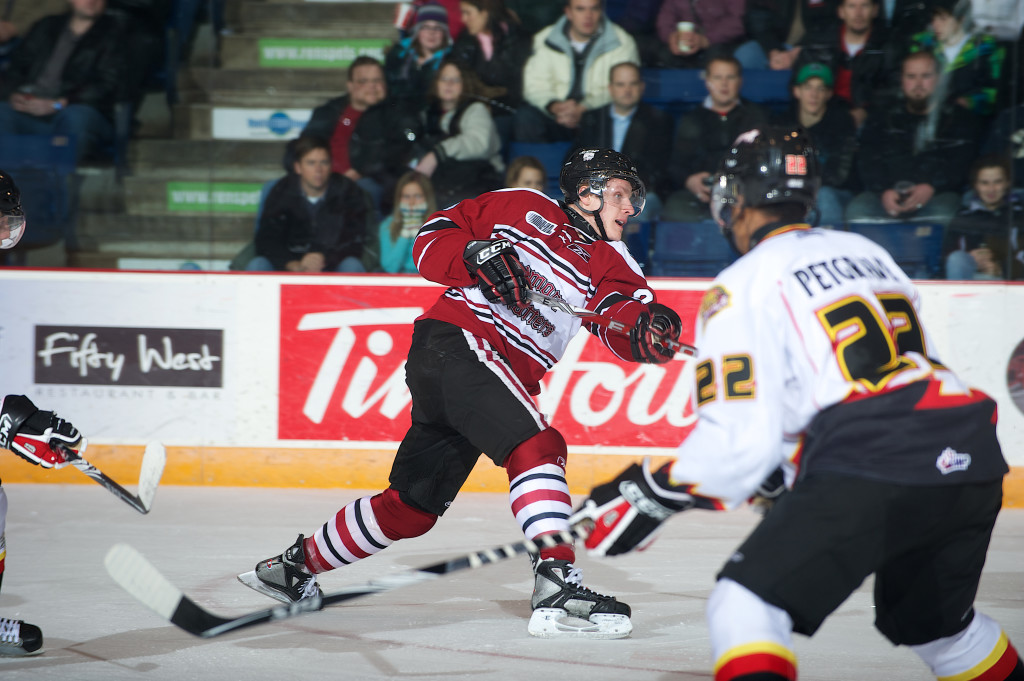 With the way teams change their line combinations these days it’s probably a little early to get excited about the combination of Taylor Beck, Michael Latta and Richard Panik.  All three 19-year-olds ooze experience, skill and veteran savvy and have at times toyed with opposing lines.  With all three over six feet and 200lbs they have proven to be a handful for their rivals.

Friday night’s convincing 6-2 win over Sarnia was a showcase for the trio as they counted four goals and three assists.  Beck had a pair showing off a deadly wrist shot, while Panik scored the goal of the year so far with a move that saw him drop the puck to his trailing skate, kick it back to his forehand and then bury the shot.  He did all of that in a blink of an eye and at full speed and the Sarnia defenceman on the play is still looking for his jockstrap.

“When I came to Guelph (in a trade from Belleville) the coach figured out who I can play with” said Panik a native of Slovakia.  “In the two weeks I’ve played with Beck and Latta we’ve had good chemistry together.  They are both great players and we just click together.”

“(Panik) is as close to a pro guy as I’ve seen in a long time” admitted coach Scott Walker who played over 800 games in the NHL.  “I never dreamed of (making the move he did) when I was playing.”

Beck has also rediscovered the game that made him the 4th overall scorer in the OHL last season.  January has been his best month as he’s racked up 12 goals and 10 assists to now lead the team in scoring with 70 points.  He is currently tied for fifth overall in the league.

“I’m playing with great line mates playing at a high caliber,” said Beck who scored his 100th goal as a member of the Storm Saturday night in the Storm’s 7-6 loss to the Wolves.  “We are really starting to come together and know exactly where each other should be.  It’s a mixture of experience and the fact we are big down low and aren’t afraid to take the puck to the net.”

What was his take on Panik’s eye-popping goal?

“It was unbelievable” said Beck.  “It shocked me at first and then I realized what he had just done.  I was happy for him and have seen him do that in practice all the time.”

Latta is also having his best offensive month of the campaign (20 pts).  But more importantly he is playing on the edge while still maintaining his discipline for the most part.  If he can continue that theme he will become the type of playoff performer coaches dream of.  He is currently the only player in the top 15 in scoring with over 100 minutes in penalties.

Still, the Storm is searching for the consistency they will need to be a true playoff performer.  They fell behind 5-2 in Sudbury before roaring back to take a 6-5 lead only to give up two goals in the last three minutes.  Then on their third game in three nights they put in a solid sixty minutes to down the Sault Greyhounds 6-3.

The line doesn’t have an official nickname yet, but if Beck, Panik and Latta continue to play like they have, it won’t be long.

From the Land of Oz….The line of Tyler Carroll, Peter Holland and Daniel Erlich is also beginning to find some chemistry.  Other than Carroll it is not a group you would think would cycle the puck and play tough, patient hockey down low, but they have done just that recently drawing raves from coach Walker…For awhile the Storm wasn’t getting any secondary scoring but the third line of Francis Menard, Cody McNaughton and Scott Kosmachuk chipped in with four goals this weekend.