Giant cheque thanks to Storm fans and RBC 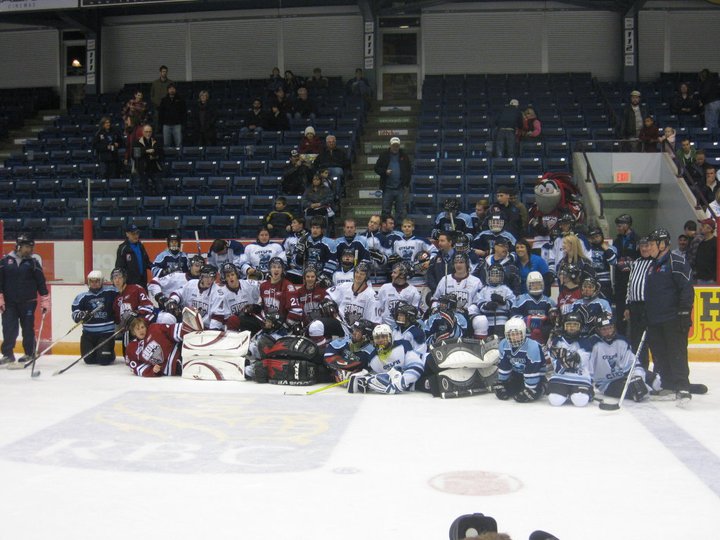 On Sunday, January 29th, the Guelph Storm participated in RBC Play Hockey Day in support of the Guelph Giants Special Needs Hockey Club.  Composed of intellectually disabled athletes, Giants’ players are given the opportunity to play and be a part of a hockey team regardless of gender or ability to skate.  This team endeavors to give a sense of community involvement to persons who in the past only been able to watch hockey from the sidelines.

Thanks to the generosity of fans that participated in the 50/50 draw on the 29th, as well as the online Guelph Giants / Guelph Storm game worn jersey auction approximately $5,000 was raised for the Giants.  As the sponsor of Play Hockey Day, RBC generously matched the amount given by Storm fans to raise the total donation made to the Guelph Giants to $10,000.

During the first intermission of the Guelph Storm’s 5-3 win over the Erie Otters, RBC, Vice President Commercial, Peter Guth presented the cheque to several Guelph Giants players and management in an on-ice ceremony.

On behalf of the Guelph Giants, the Guelph Storm and RBC thanks every fan that took part in this fantastic day for a truly wonderful cause and for helping to raise $10,000!

RBC is proud to be the official bank of the Guelph Storm.  RBC Play Hockey. From the pond to the podium. From the early morning practices to the Saturday night game – RBC® is proud to support the hard work and dedication that helps hockey happen.