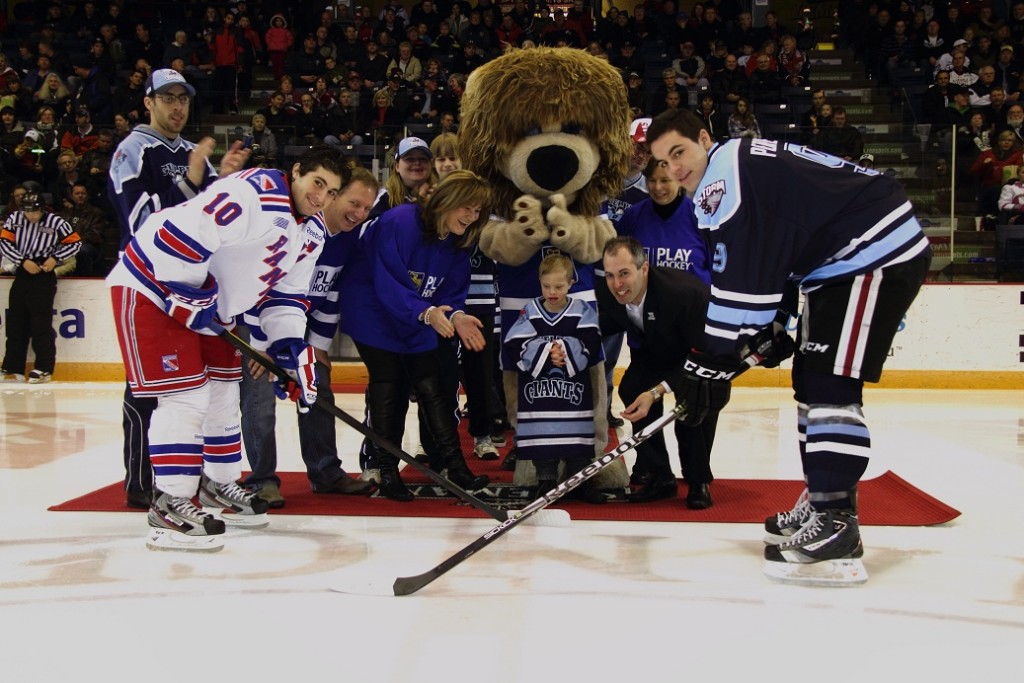 While their Storm may have lost 5-3 on Sunday afternoon, there’s little doubt that the Guelph Giants left the Sleeman Centre as winners as RBC and the Guelph Storm celebrated RBC Play Hockey™ Day.

RBC Play Hockey™ Day also raised money for the Guelph Giants through all tickets sold at local RBC branches plus 50/50 proceeds from the day also benefited the Giants.  In addition, RBC Play Hockey™ donated $2,000 to the Giants to launch the fundraiser.

Own a piece of Guelph Storm history and support a great cause betwen February 2 – 9.

GUELPH GIANTS HOCKEY… a team composed of intellectually disabled athletes and are entering our 6th season.  Giants’ players are given the opportunity to play and be a part of a hockey team regardless of gender or ability to skate.  This team endeavors to give a sense of community involvement to persons who in the past only been able to watch hockey from the sidelines.

The principles of the program are:

The experience gives the players a chance to form close and important friendships with their peers and permits them to develop sportsmanship that would not have otherwise been possible.  Skating improve gross motor development in a fun way. The players are able to develop at their own rate with the help of a very dedicated group of volunteer coaches that emphasize fun while learning.

Special Hockey International has been around since 1970 where it was started by a gentleman in a suburb of Toronto.  Since that time, there is upwards of 30 teams internationally that have been started in Canada, the States, and even in England!  My initial experience with the program originated as an assistant coach in 2003 with the Orangeville Wolves team.  Since I am a resident of Guelph, I felt that this type of team would be embraced by the community of Guelph since it is a dedicated hockey town and has fantastic programs already established for people with developmental disabilities.

The Guelph Giants are totally a non-profit organization and rely on a registration fee, fundraising, and donations to keep the team operating.  Donations pay for hockey jerseys, uniforms, travel costs, year-end trophies, insurance, and for ice time.  The money goes directly to the program; the coaches and organizers are volunteers and donate their time for the good of the players.

RBC Play Hockey™. From the pond to the podium. From the early morning practices to the Saturday night games. RBC is proud to support the hard work and dedication that helps hockey happen.