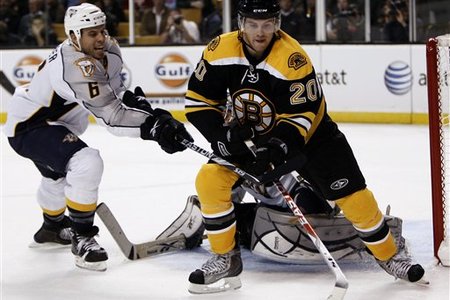 Defeating the Vancouver Canucks 4-0 last night, the Boston Bruins won their first Stanley Cup since 1972. Among those hoisting the cup were three members of the Bruins’ organization with ties to the Royal City. Former Storm forward Dan Paille, former Storm Head Coach Geoff Ward and Guelph resident Rich Peverly lifted the cup for the first time in their careers on Wednesday night.

Paille scored 116 goals and 247 points in a Storm uniform before graduating to the NHL. The Welland native was originally drafted 20th overall by the Buffalo Sabres in 2002, but joined the Bruins via a trade in 2009. Ward spent one season behind the Storm bench in 1998-99 leading the team to the Midwest Division title with a record of 44-22-2. Peverly never played for the Storm, but grew up in Guelph and played most of his minor hockey for the Guelph Reps (now Jr. Storm).

With the Bruins first cup in 40 years, another former Storm player was handed a heart breaking loss. Miraculously returning to the series after suffering what was considered a career ending eye injury, Manny Malhotra will have to wait at least another season before he sips out of Lord Stanley. Malhotra was originally drafted 7th overall by the New York Rangers in 1998. The Mississauga native would then go on to play for the Rangers, Dallas Stars, Columbus Blue Jackets and the San Jose Sharks. His most recent run with the Canucks is the closest he has come to winning the Stanley Cup in his career. Also on the Canuck’s playoff roster was former Guelph captain Ryan Parent who practiced with the team after playing four games with Vancouver this season.

Daniel Paille Storm bio… Daniel was originally selected by the Storm in the 1st round (6th overall) of the 2000 OHL Priority Selection… Paille would represent Canada at the World Junior Championship on two ocassions claiming silver both times… The Welland native was captain of Team Canada in 2004… Finished his Storm career ranked second all-time in career goals with 116.

Manny Malhotra Storm bio… Manny was originally selected by the Storm in the 1st round of the 1996 OHL Priority Selection… The Mississauga native was named the team’s Rookie of the Year following the 1996-97 season… Manny was drafted in the 1st round (7th overall) in the 1998 NHL Entry Draft and played with the NY Rangers the following season… Represented Canada at the World Junior Championship… Was returned to the Storm as a 19 year old to finish the 1998-99 season.