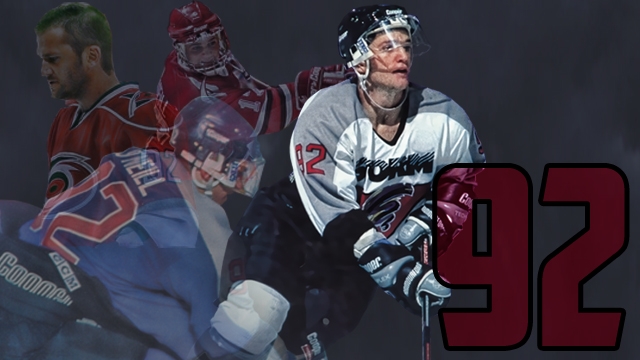 By Tony Saxon, Guelph Mercury
Guelph Storm assistant coach Todd Harvey has a unique perspective on the man they will honour Saturday afternoon at the Sleeman Centre prior to the Storm/Kitchener Rangers game.

No only did Harvey play against Jeff O’Neill both in the Ontario Hockey League and National Hockey League, he was also a teammate of O’Neill’s on the Team Canada world junior team that won gold at the 1995 tournament in Red Deer.

Harvey and O’Neill were also the No. 1 picks in the OHL entry draft: Harvey in 1991 to the Detroit Compuware Ambassadors, selected just ahead of defenceman Jeff Smith; O’Neill the following year to Guelph ahead of Brett Lindros.

Harvey’s Detroit teams ousted O’Neill’s Guelph Storm from the playoffs in 1993. They did the same in the OHL final in 1995, but Harvey had been called up to the Dallas Stars and didn’t play against O’Neill in those playoffs.

“Yeah, but he couldn’t handle me,” Harvey joked when asked if he and O’Neill often went head to head on the ice during their junior and professional careers.

“Jeff was a talent. You don’t score 300 points in this league in three years and not be a great player,” Harvey said. “He came in at 16 and pretty much dominated right from the get go.”