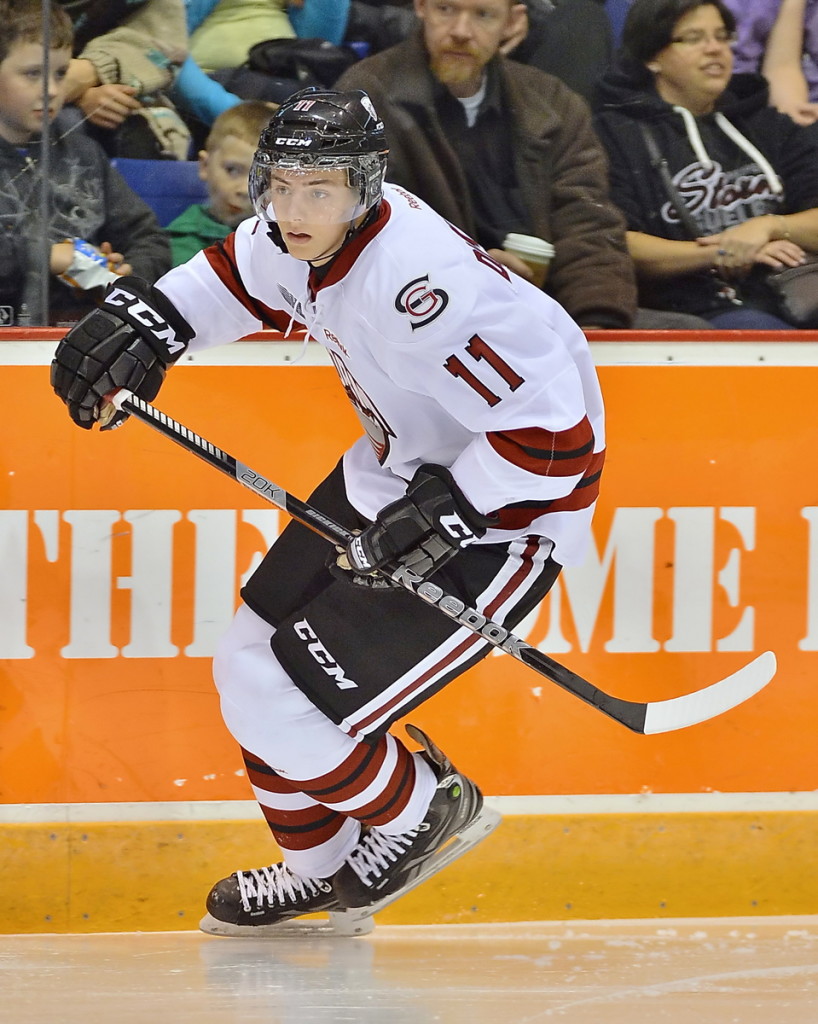 GUELPH, ON — The Storm have announced that Jason Dickinson has been named the team’s HY-GRADE STEEL ROOFING Player of the Week for the week ending December 7th.

In three games last week, Dickinson recorded five points (three goals, two assists) and a plus-3 rating as the Storm rolled to a perfect 3-0 record to start the month of December.

It’s no surprise that Dickinson had an extra jump in in step this week, as last Monday he was one of 29 players named to Team Canada’s final selection camp roster for the 2015 World Junior Championship, which begins later this month in Montreal and Toronto.

The Storm kicked their week off on Thursday in St. Catharines, with the team’s first ever visit to the IceDogs’ brand new home, the Meridian Centre.  Dickinson assisted on Pius Suter’s tying goal midway through the second period, as the Storm then pulled ahead for a 5-2 victory.

On Friday night at the Sleeman Centre, the Storm captain posted the game-winning goal at 7:29 of the third period in front of a national TV audience on Rogers Sportsnet.  He finished with three points on the night as the Storm earned a 5-3 victory over the Peterborough Petes.

To cap off the week’s play on Sunday, the Storm visited the Saginaw Spirit with Dickinson once again tallying the game-winning goal in a 4-2 victory.

With the 3-0 weekend, Dickinson and the Storm now sit alone in fourth place in the Western Conference standings with a record of 17-10-0-1.

The schedule doesn’t get any easier in the coming week for the Storm, as a ‘three-in-three’ scenario has the Storm hosting Owen Sound on Friday night, followed by a road game in Plymouth on Saturday and back to the Sleeman Centre for a matchup with the league-leading Oshawa Generals on Sunday.

Friday’s game against Owen Sound will mark the club’s annual Teddy Bear Toss, sponsored by Brent Johnson of Wellington Motors.  As always, fans are encouraged to bring new or gently used stuffed toys to throw onto the ice following the Storm’s first goal of the game.

With two home games this week, fans are also encouraged to take advantage of the WEEKEND PASS offer.  Fans who purchase a regular-priced ticket to Friday’s game will have an opportunity to purchase a ticket to Sunday’s game for just $10.00. (Offer available at the Storm Box Office in Old Quebec Street Mall or at the Storm Kiosk in Stone Road Mall.