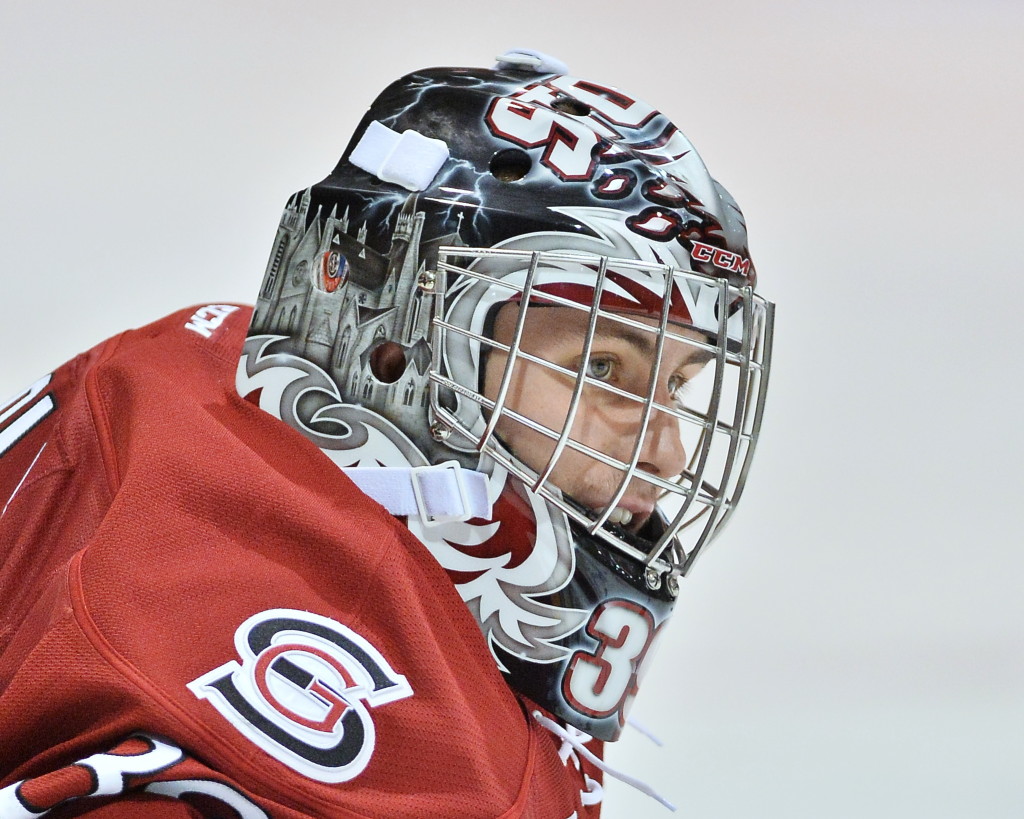 Toronto, ON – The Ontario Hockey League today announced the recipients of the league’s three Academic Player of the Year awards for the 2014-15 season.

All three players will be formally presented with their awards at the annual OHL Awards Ceremony on Tuesday June 9.  McDavid will be the OHL’s nominee for CHL Scholastic Player of the Year, an award he also earned in 2013-14, which will be announced on Saturday May 30 as part of the events at the 2015 MasterCard Memorial Cup in Quebec City.

Justin Nichols, a 19-year-old from St. Catharines, ON, is a first year student at the University of Guelph where he excelled in Sociology, Introductory Marketing, and Human Development.

“It is a great honour to be the recipient of this award,” said Nichols. “Roger Neilson was a tremendously respected man in the hockey community and to be associated with the values he brought to the game are a privilege.”

Playing in his third OHL season and second with the Storm, Nichols posted a 34-20-2-1 record with two shutouts, along with a goals-against-average of 3.26 and save percentage of .907 for the defending OHL champs.

“Justin is a very worthy winner of the Roger Neilson Award,” said Storm General Manager Mike Kelly. “Whether it be on the ice or in the classroom, Justin is one of the most disciplined and self motivated individuals that I have ever been associated with”.

The Roger Neilson Memorial Award is named in honour of the Hall of Fame Coach who served behind the Peterborough Petes bench in the late 1960’s and early 1970’s.  Neilson, a former high school teacher, was a pioneer in stressing the importance of education to all of his players.  First presented in 2005, Nichols is the third member of the Storm to receive the award following Tim Priamo in 2009, and Kyle Pereira in 2012.

“Justin is a mature, responsible student who goes about meeting academic requirements independently,” said Storm Academic Advisor Shari Dorr. “He consistently demonstrates a commitment to his education year round and in doing so is an excellent example that it is possible to simultaneously excel in both sport and school. As a result Justin is always a pleasure to work with.”

Finalists for the award include Tait Seguin of the London Knights, and Mitch Jones of the Plymouth Whalers.

Connor McDavid earns OHL Scholastic Player of the Year honours for the second straight season as an ‘A’ student in Grade 12 at McDowell High School in Erie.  The Otters’ captain studied 6 courses including Computer Applications, Personal Finance, Writing, World History, Equity and Social Justice, and High Performance Athletics during the 2014-15 academic year.

“It’s pretty special to win this award,” said McDavid. “Education is something that is very important to myself and my family, so to win this two years in a row is very special. It can be hard to balance hockey and school, but if you take full advantage of the hockey side and the education side, it leads to good things.”

On the ice, the 18-year-old from Newmarket, ON, finished third in league scoring with 120 points in 47 games competing in his third OHL season with the Otters.  The first overall pick in the 2012 OHL Priority Selection is eligible for the 2015 NHL Draft and is the top ranked prospect by NHL Central Scouting.

“This is just another example of whatever Connor wants to do, he will do it to the very best,” said Otters’ General Manager Sherry Bassin. “There’s no ego to him. He has an inner humble drive to be the best at whatever he attempts to do. I have always commented that he is a very special person. Everyone knows he is a special player.”

Each year the Bobby Smith Trophy is presented to the OHL Scholastic Player of the year who best combines high standards of play and academic excellence.  The trophy is in honour of Bobby Smith, a former Ottawa 67’s star who exhibited a standard of excellence in both of these areas.  McDavid is just the third player to receive the award multiple times since first presented in 1980 following Nathan LaFayette (Cornwall 1991-92), and three-time winner Dustin Brown (Guelph 2001-03).  Past winners also include Steven Stamkos (Sarnia 2007), Ryan Ellis (Windsor 2008), Matt Duchene (Brampton 2009), Erik Gudbranson (Kingston 2010), Dougie Hamilton (Niagara 2011), and Darnell Nurse (Sault Ste. Marie 2013).  Two former Otters including Adam Pelech and Brad Boyes also won the award in 2012 and 2000 respectively.

Finalists for the award include Blake Speers of the Sault Ste. Marie Greyhounds, Rocky Kaura of the Barrie Colts, and Michael Pezzetta of the Sudbury Wolves.

“Just as hockey is a team effort, academics is a team effort too,” said Dhillon. “I am very grateful to have won this award and very thankful to those who have made it possible-my teachers, Mr. Tope, my family, and most important-the team.”

Selected by the IceDogs in the third round of the 2014 OHL Priority Selection, the former Buffalo Regals goaltender also received Central Division Academic Player of the Month honours for November after making his OHL debut between the pipes on October 11.

“Although he didn’t see a lot of ice time this season, Stephen fully immersed himself with the IceDogs and his school work,” said Academic Advisor Tim Tope. “He quickly became a leader and an example for all of the IceDogs high school students with his work ethic in the classroom.  He is greatly respected by all staff at Governor Simcoe and is a pleasure for teachers to have in their class.”

The Ivan Tennant Memorial Award is given to the Top Academic High School Player and is named in honour of Ivan Tennant, who spent a lifetime combining hockey and education.  He was the Kitchener Rangers’ Education Consultant for 20 years and a key figure on the OHL’s Education Consultant’s Committee.  First presented in 2005, Dhillon is the fourth member of the IceDogs to receive the award following Alex Friesen in 2008, and brothers Freddie and Dougie Hamilton in 2009 and 2010 respectively.

Finalists for the award include Kyle Maksimovich of the Erie Otters, and Michael Pezzetta of the Sudbury Wolves.

All 20 of the OHL’s member clubs provide nominees for each award with the Bobby Smith Trophy nominees representing the 2014-15 OHL Scholastic Team: