Storm at Knights… after 20 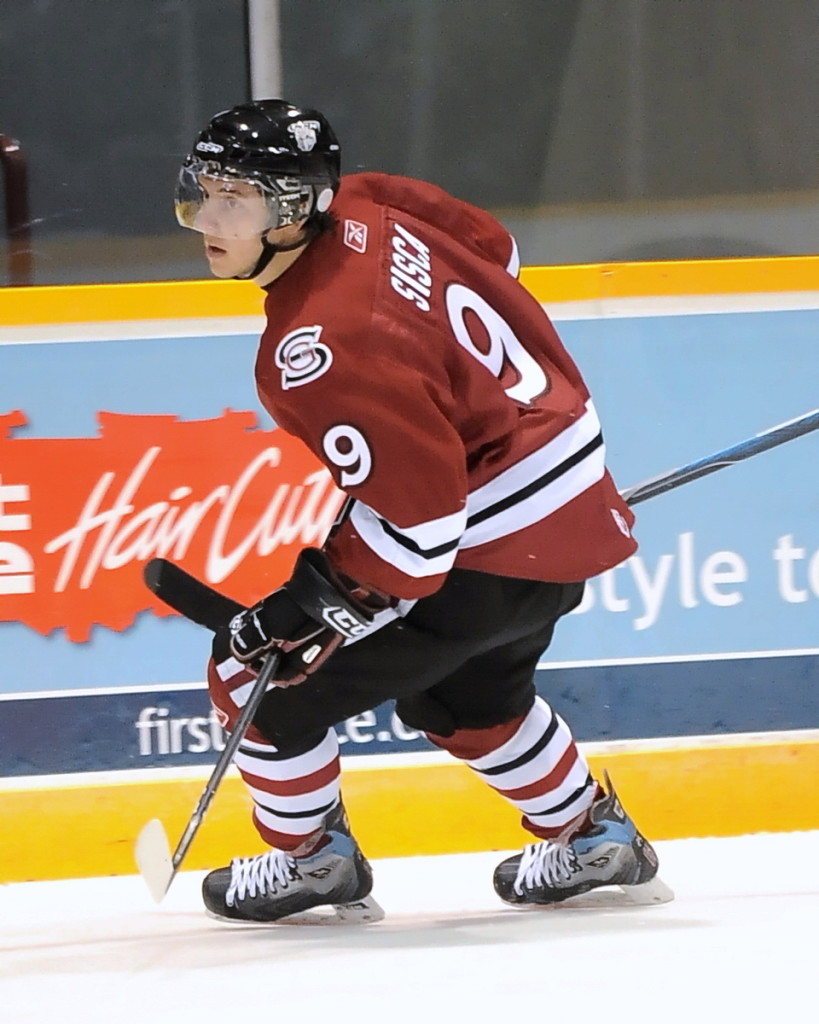 Saturday night, the Storm went to London on the heels of an 8-1 home win over the Owen Sound Attack. After falling behind 5-1 just over 26 minutes in, Guelph battled back to 5-3 but eventually dropped a 7-3 decision.

After notching a hat trick in Friday’s win, Storm forward Mat Sisca (pictured) continued his hot play with a pair of second period goals.  In his last seven games, Sisca has nine goals and three assists.

The hosts notched a pair of powerplay goals against the Storm’s #20 ranked penalty kill in the first and added an even strength marker with 2:59 remaining in the first.  Justin Taylor opened the scoring his first of two in the stanza by deflecting a Phil Varone shot out of the air and behind St. Jacques.  Just under 10 minutes later Guelph was back in the box and London capitalized again.  Phil McRae picked up his second assist on the goal with a bad angled shot that fooled St. Jacques, hit the far post and dropped in the blue paint for former Guelph winger Leigh Salters to tap in.  Before the end of the period, Taylor would notch his 18th of the season as the trailer on an odd man rush.  Shots on goal in the first were 11-6 in favour of London and scoring chances badly favoured London.

The Storm opened the second period on the man advantage.  Failing to score, the visitors seemed to build a little momentum and would eventually cash in on a second powerplay at 4:06.  Sam Lofquist’s point shot hit a London forward and bounced to Sisca who was all alone for a quick wrist shot past Michael Hutchinson.  The Knights would answer back with with two goals in 81 seconds to grab a four goal bulge.  Jared Knight notched the fourth goal on a similar play to Sisca’s goal, then Taylor would pot his third of the game with a pass from behind the net that caught St. Jacques’ leg and found the back of the net.  Matt Hoyle would replace St. Jacques and play the final 13:40 of the second and stop all 11 London shots.  Guelph would gain some momentum and score a pair to cut the lead to 5-3 before the end of the middle twenty.  Michael Latta would outmuscle a defenceman and slide it out front to Sisca for a quick shot to make it 5-2, then Peter Holland would scoop up a Steven Tarasuk turnover in the neutral zone and saucer a pass to Zack Mitchell who lifted it over Hutchinson for a shorthanded goal.  The Knights outshot Guelph 15-8 in the second.

Down a pair after two, Guelph would come out strong and threaten in the third, but big saves at big moments by Hutchinson and a pair of London powerplays took the steam out of the Storm’s comeback attempt.  The Knights finally solved Hoyle at 13:54 on a McRae point shot before Jared Knight redirected a Colin Martin feed off the rush through Hoyle’s legs to cap off the scoring.  The Storm played their best hockey in the final 30 minutes but the four goal deficit would be too much to overcome and outshot London 19-11 in the third.

Guelph will return to the Sleeman Centre for a 2 pm start tomorrow afternoon to face the Kingston Frontenacs.