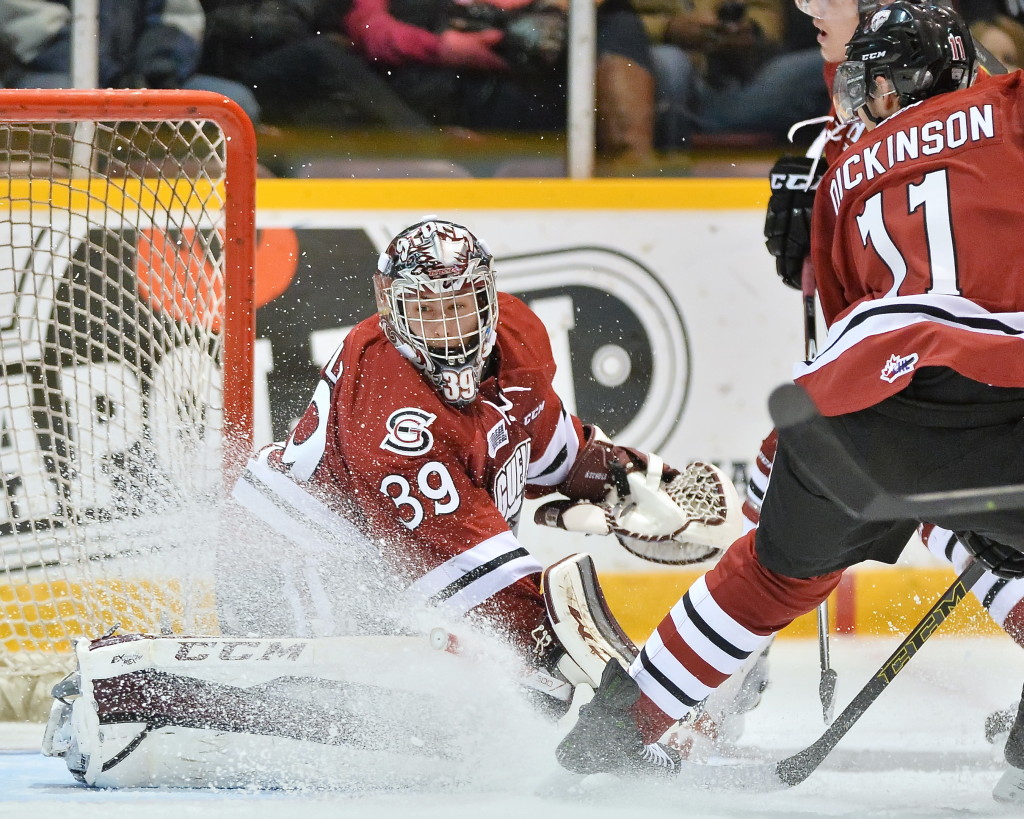 They were close, but not close enough.

Still searching for their first victory of the pre-season, the Guelph Storm gave up the go-ahead goal with 8:23 remaining as the Mississauga Steelheads won 4-2 over the Storm Monday afternoon at the Sleeman Centre.

After losing six of their top seven scorers from last season, a young Guelph team are still learning and improving every game. It was the second straight game that the Storm have given up a lead and lost.

Noah Carroll and Tyler Boston both scored for the Storm while Justin Nichols stopped 35 shots in the loss.

Sean Day scored twice while Michael McLeod and Daniel Muzito-Bagenda each tallied once for Mississauga. Leif Hertz made 21 saves in the victory.

For the second consecutive game this pre-season, it was the Storm who earned the day’s first marker.

Right as Mississauga’s McLeod left the penalty box after a checking-to-the-head penalty, Carroll wristed off a shot from the right point that sailed past a screened Hertz to give Guelph an early 1-0 lead.

The goal was Carroll’s first of the pre-season after the defenceman scored two goals in 62 games last season.

Making a number of big saves in the opening frame was Nichols, stopping all 11 shots faced in the first 20 minutes. The veteran goaltender turned aside a couple of Steelheads chances that looked to be sure goals as the Storm led 1-0 heading into the second period, although being outshot 11-8.

It took a lucky bounce for Mississauga to get their first goal by Nichols.

While killing a penalty, Day scored his first of the afternoon when he cleared the puck from his own zone. The puck took an odd bounce off the glass and redirected into an open net after Nichols had left his net to play what should have been a routine play to recover an iced puck into the corner boards.

Guelph would regain the lead with 6:05 to play in the middle frame thanks to Boston.

The centre, who’s playing his second full-year this season, tipped home a Tyler Hill shot to give the home team a 2-1 lead.

The lead lasted just over three minutes, though, when the Storm were assessed two penalties 25 seconds apart.

With a five-on-three power play, Day potted his second of the game when he rifled a shot under the glove of Nichols. The goal knotted the score at two with 2:44 remaining in the middle frame.

The period looked to be over, but with 1.1 seconds remaining on the clock Guelph’s Kyle Rhodes and Mississauga’s Damian Bourne dropped the gloves. Rhodes had been frustrating Steelheads forwards all afternoon with his aggressive and physical play.

The two teams skated off the ice tied at two, with the visitors leading 22-16 in shots.

The initial 10 minutes of the third period saw a see-saw battle where both squads had scoring opportunities with neither goalie goaltender willing to give up the go-ahead goal.

With 8:23 to go in the game, the Steelheads would take their first lead of the day. On a power play, McLeod pounced on a rebound off a Bryson Cianfrone shot and roofed it on Nichols.

Then, with 2:36 remaining, Mississauga sealed the deal when Muzito-Bagenda found himself with the puck at the left of the crease. After a slick cross-crease pass from Cianfrone, Muzito-Bagenda shot it off the blocker of Nichols, where it hit and dropped across the goal line.

Although Guelph turned up the pressure in the final two minutes, they couldn’t get anything past Hertz as the Steelheads took this game, 4-2.

Final shots were 39-23 for Mississauga.

The Storm are back in action next Friday when the Peterborough Petes come to town. Game time is at 7:30 PM at the Sleeman Centre.

– Today’s game was the 3rd of 5 pre-season matchups for the Storm. With this afternoon’s loss, they drop to 0-3 on the pre-season.

– Rookie Nate Schnarr saw his first pre-season action after being out of the lineup during the team’s home-and-home with the Colts this past Friday and Saturday.