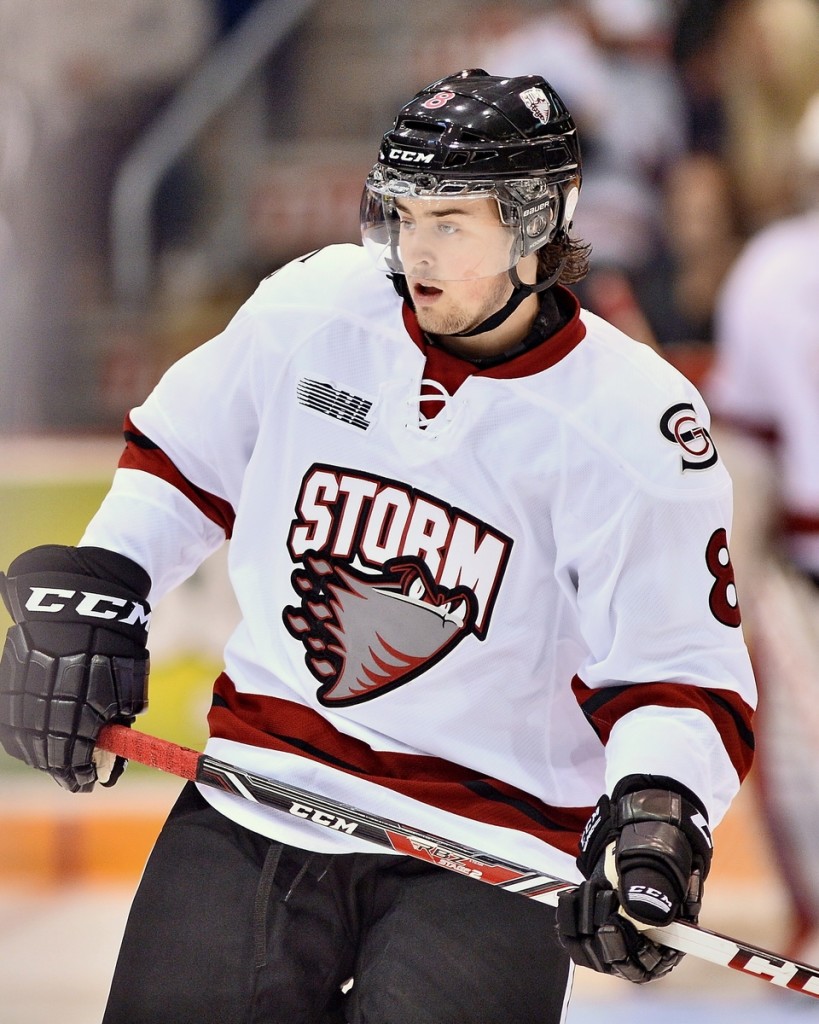 Justin Nichols and the Guelph Storm have not lost since last year.

Even though 2015 is just two days old and they have played only one game, the Storm are undefeated in the new year as they beat its division rival Owen Sound Attack 3-2 in a shootout Friday night at the Sleeman Centre.

Nichols continued his strong play this season, making 37 saves in a victory where his team was outshot for the seventh straight game. Defenceman Zac Leslie led the way offensively, scoring the shootout winner, a goal and an assist in the win. Adam Craievich potted the other goal.

For the Attack, goaltender Jack Flinn made 19 saves while Jeffrey Gilligan and Kyle Platzer chipped in with goals.

It wasn’t the home team who controlled the game in the early going, though.

Owen Sound emerged from the tunnel with jump in their step to start the game.

The Attack dominated the opening 10 minutes of the game, outshooting Guelph 7-1. Nichols kept the Storm in the game with three huge, key saves on grade A scoring chances, including a partial break from the Attack’s leading scorer Platzer.

It didn’t stop there for Nichols, though, as Owen Sound continued to pepper the St. Catharines, Ontario native with shots. The Storm escaped the first period tied at zero despite being outshot 14-3.

The middle frame began much like the first ended. Through the first five minutes of play, the Attack outshot the Storm 6-3 and continued to control the pace of the game.

However, Guelph would soon find their footing.

After a Luke Cairns breakaway led to an Owen Sound hooking penalty, the Storm went to the power play for the second time in the period.

Leslie opened the scoring when he shot home a rebound while falling to the right of the Attack net. It was Guelph’s 23rd goal at home with the man-advantage and they currently rank ninth in the league with a 24.2% success rate.

Craievich scored his second goal in as many games just 40 seconds later. The sophomore skated into the Owen Sound zone and ripped a beautiful wrist shot over the glove of Flinn, increasing the home team’s lead to 2-0. The goal was Craievich’s 10th point of the season, tying his previous career-high set last season.

Nichols continued to play sound hockey as the Storm entered the second intermission with a 2-0 lead, although being outshot 26-14.

With the last four games between these teams having been decided by one goal, fans knew to expect a close game.

After further pressure from the visiting team, the Attack would finally solve Nichols.

At 11:29 of the third period, Gilligan snapped a shot from the high slot that the Storm goaltender got a piece of, but not enough to keep it from crossing the line. The goal came on the Attack’s 28th shot of the game and cut Guelph’s lead to 2-1.

The Western Conference’s fifth-placed Owen Sound would put another puck past Nichols with just 1:06 remaining in the game.

Platzer received a pass in traffic from Zach Nastasiuk at the top of the Guelph crease where he banged it in to knot the score at two.

The Attack led in shots 38-21 at the end of regulation.

Both teams exchanged chances in a back-and-forth overtime, but neither team could end it as the game would be won in a shootout.

The Storm went to the shootout for the fourth time this season, while it was Owen Sound’s league-leading 10th shootout of the year.

After five rounds of shooters and no goals scored, Leslie beat Flinn on backhand deke where he slid the puck between the Attack goalie’s pads. The goal would stand as the winner: 3-2 Guelph final.

Owen Sound outshot the Storm 39-21 in the game.

The Storm are back in action tomorrow night when they play the second part of a home-and-home against the Attack. Puck drop is sheduled for 7:30 PM in Owen Sound. Guelph is back at home next Friday, January 9 when they take on the Misissauga Steelheads at 7:30 PM.

– With an assist on the second goal, defenceman Kyle Rhodes earned his first OHL point.

– Tyler Bertuzzi remains 1 goal away from 50 in his career, while Luke Cairns is 1 assist shy of 100.

– Tonight’s game was the first game of a home-and-home against the Attack. It is also the 4th of 8 meetings between the two division rivals this season. Guelph now leads the season series 3-1.

– The last 5 games against the Attack have been decided by 1 goal (4 this year).

– This was the first time this season where the Storm did not outshoot Owen Sound. They had outshot the Attack in all 3 previous games this year.

– In their last 16 games overall, Guelph has been outshot in every game but 2.