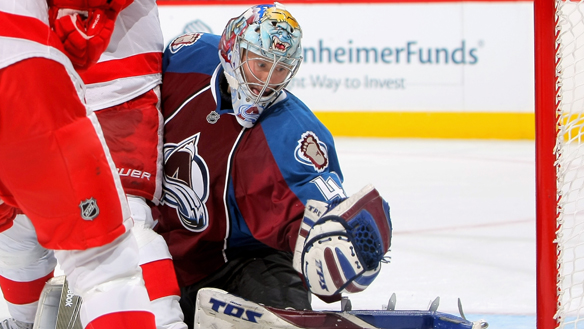 By Terry Frei, The Denver Post – Given his first chance to be a season-long No. 1 goaltender in the NHL, Craig Anderson for the most part got — and deserved — glowing reviews for his work in the Avalanche crease this season.

Most notably, Anderson’s stinginess when he earned the NHL’s first star award for the first month of the season was crucial. In that road-dominated stretch of the schedule, Anderson’s play enabled the young Avalanche to develop a bit of a swagger.

It also showed that a finish at or near the bottom of the Western Conference wasn’t inevitable for the Avalanche, and despite a slump at the end of the season, Colorado is returning to the postseason after a one-year absence and will play the Western Conference’s No. 1 seed, the San Jose Sharks, in the first round.

Now looms another test for Anderson, and at the time of the year that can make or break goaltenders’ images — even more so than the other players on the roster.

When the puck drops to open the Avs-Sharks series in San Jose tonight, Anderson, 28 and in his ninth professional season, will be making his first NHL playoff appearance.

“I think it’s going to be a great experience,” Anderson said. “There’s a lot of guys in here who haven’t had any playoff experience, but the unknown is sometimes a good thing. When (Carolina’s) Cam Ward won the MVP of the Stanley Cup playoffs, he didn’t have any experience, either. (Pittsburgh’s) Marc-Andre Fleury had only a little bit of experience when he won the Stanley Cup. So I think there’s enough youth out there that has done it before without much experience in the playoffs, and it’s something you can kind of build off of and use as motivation.”

In the American Hockey League, Anderson was 8-15 in the postseason and was never on the winning side in five series. Going back further, Anderson was 0-7 in 10 playoff games over three seasons with major junior’s Guelph Storm of the Ontario Hockey League.

CLICK HERE TO READ THE COMPLETE STORY AT MERCURYNEWS.COM