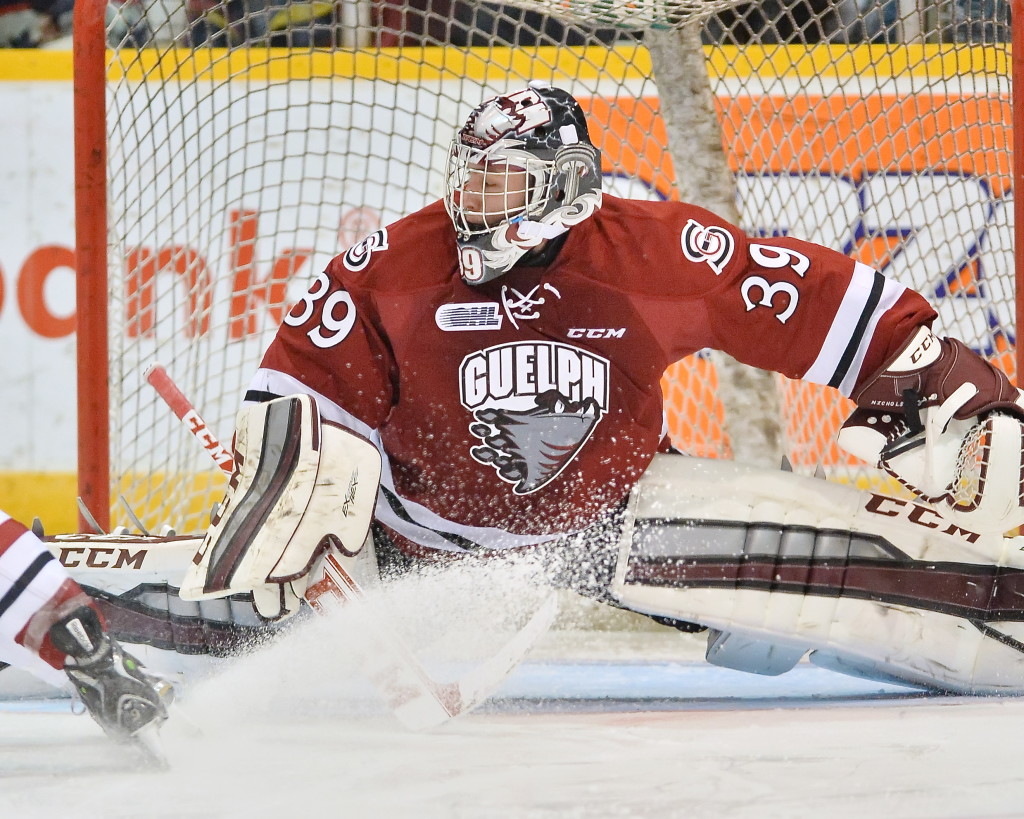 The Guelph Storm will play second round playoff hockey for the second straight year.

The Storm (4) defeated the Owen Sound Attack (5) 2-1 Saturday night at the Sleeman Centre as they won the first round series, four games to one.

It was another close game between the division rivals. For the eighth time in 13 meetings this season, the game was decided by a single goal.

The Attack led 1-0 after the first period, but after two goals in a span of 1:18, the Storm took the lead and with the help of Justin Nichols, never looked back.

Scoring for Guelph were Phil Baltisberger and Pius Suter. Nichols was stellar throughout, making 28 saves in the victory.

The game began with physical, end-to-end action with each team getting grade-A scoring opportunities.

8:50 into the game, a neutral zone turnover by the Storm would lead to the games opening goal.

Szypula picked up the puck and rifled a low slapshot over the right pad of Nichols to give Owen Sound a 1-0 lead.

Both teams continued to generate plenty of chances, but Nichols and Flinn prevented anymore goals of being scored in the first period.

The Attack skated off with a 1-0 lead after one, outshooting the Storm 13-10 in the process.

The beginning of the second period was much like the first.

Both teams exchanged early chances but the goaltenders and defence continued their solid play for both sides.

A fight between Guelph’s Kyle Rhodes and Owen Sound’s Jaden Lindo provided the Storm with an extra boost.

While playing four-on-four, Baltisberger collected the puck in the Attack zone near the left boards.

Skating towards the net, the Storm defender snapped a sharp angle shot at Flinn that squeaked through the netminder and tied the game.

Suter capitalized on an Owen Sound turnover in the neutral zone and turned it into a breakaway. The speedy Switzerland native wristed a low shot over the right pad of Flinn to give Guelph its first lead of the game.

The Storm finished third in the league with 14 shorthanded goals in the regular season and are now tied for second in the playoffs with two.

A solid second frame saw the home team take a 2-1 lead into the third period with a 24-19 shot advantage.

During the first 10 minutes of the third period, both Guelph and Owen Sound fired off five shots looking for the games next goal.

Just like they had done all game, each goaltender continued to stop key chances and to give their team a chance to win.

A delay of game penalty to Suter with 1:40 remaining in the game made for an exciting finish.

With Flinn on the bench in favour of an extra attacker, the Attack had a six-on-four advantage for the remainder of the game.

But the Storm buckled down behind the cheers of their home crowd.

With a few big blocked shots and impressive saves from Nichols, Guelph would hold on to win the game, 2-1.

With the win, the Storm advance to the second round of the OHL Playoffs, defeating the Attack 4-1 in the first round.

Guelph will now wait to see who they will face in the second round. They will not know their opponent until the series between the London Knights and Kitchener Rangers concludes.

– Tonight’s game was the 13th meeting of the season between the two teams. Of those games, 9 were decided by 1 goal while 5 were decided in overtime.

– With the victory, the Storm have now won 5 consecutive playoff series.

– Guelph advances to the 2nd round for the second straight year.