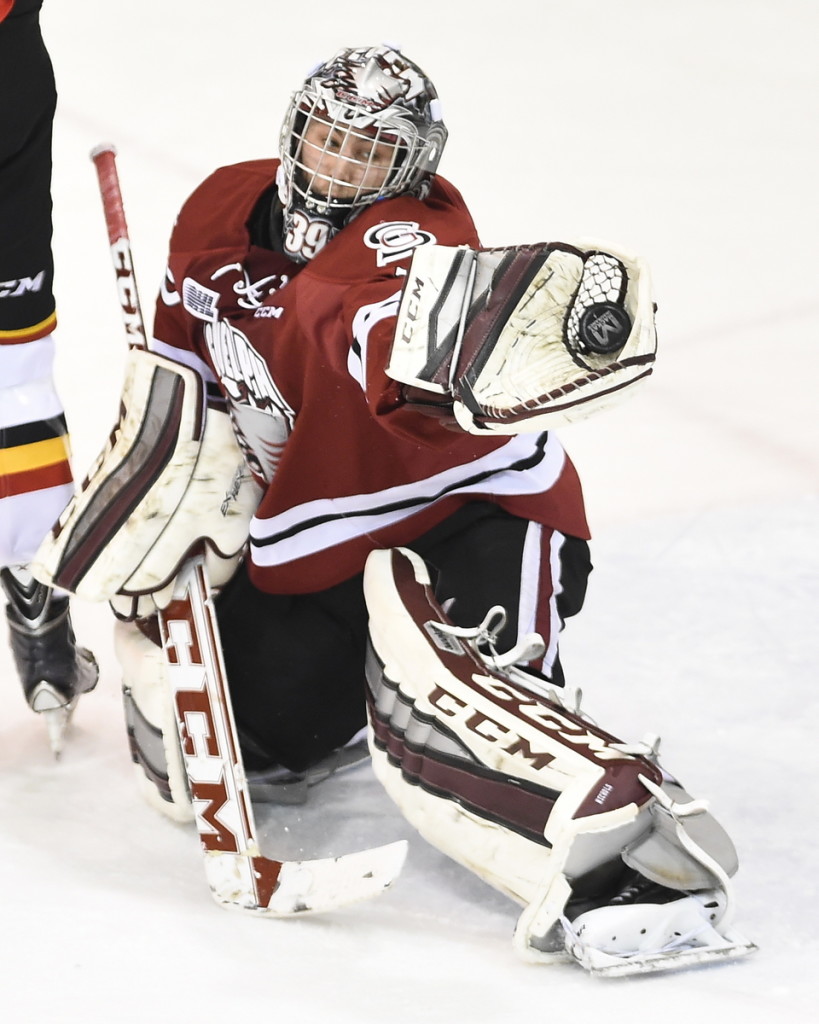 A lot of goals along with some solid goaltending is a pretty good strategy to winning a hockey game.

That’s what the Guelph Storm received from their players Friday night as they defeated the visiting Peterborough Petes 6-1 at the Sleeman Centre.

The Storm scored as many goals as they had in their first three pre-season games combined while goaltender Justin Nichols did what he’s been known to do quite well: stop a lot of pucks.

Nichols was solid all night, allowing just one goal and stopping 33 shots in the victory.

Adam McPhail had Peterborough’s only marker while Dylan Wells made 20 saves in the loss.

For two teams who only see one another twice a year playing out of separate conferences, tonight’s game looked as if they were division rivals.

There was no shortage of physical play as the hits began right from puck drop, and it was a result of the physicality that led to the game’s first goal.

Peterborough’s Greg Betzold took a four-minute penalty for spearing Guelph’s Garrett McFadden after the two exchanged shoves, and the Storm capitalized on their first power play of the night.

Boston, with plenty of time in the left circle, sniped a beautiful shot off the crossbar and in to give his team a 1-0 lead.

Shortly after the goal, Storm defenceman Kyle Rhodes did his part to contribute to the heavy-hitting matchup. Rhodes laid a big hit on a Peterborough forward before finding himself in a fight with Cameron Lizotte, who took exception to the collision.

A little under six minutes later, McEwan extended the home team’s lead. Nicolas Sicoly beat a Petes player to the puck before chipping it to an open McEwan, who made no mistake lifting it past Wells on a half-breakaway.

Guelph took a 2-0 lead to the locker room while both teams fired off eight shots in the opening 20 minutes.

The second period began much like the first did: plenty of hits and scoring by the host team.

Seconds after losing his stick from a collision, Hill skated to the Storm bench where rookie Isaac Ratcliffe offered his stick to the veteran. Using Ratcliffe’s stick, Hill received the puck at the top of the slot and rifled a snap shot to the left of the net and past Wells.

With 5:45 remaining in the period, Guelph tallied again.

McEwan created a neutral zone turnover and passed the puck to rookie Liam Stevens, who dished it to Marc Stevens who slid it under the Petes goaltender to give the Storm a 4-0 lead.

In control of the game, Guelph ended the period with a 4-0 lead despite being outshot 19-16.

The goals didn’t stop there as Burghardt scored the next two Storm goals in a span of 3:15.

His first, a mere 3:11 into the final frame, came when he received the puck at the hash marks and lasered a shot top-shelf. The Bowmanville, Ontario native registered his second goal after he and Givani Smith took swings at a loose puck that Wells struggled to get ahold of, with Burghardt being the one to bang it in.

Peterborough would finally slip one by Nichols with 8:35 left in the game.

Dangling his way to the net, McPhail beat the Storm goalie after Nichols failed to get a piece of a wrist shot, making it 6-1.

Both teams kept firing shots at opposing netminders, but neither could score another goal as Guelph won their first game of the pre-season, 6-1.

Final shots were 34-26 for Peterborough.

In addition to tonight’s game, the teams played a three-on-three overtime period in preparation for the new format that will take place in the regular season. Peterborough’s Jonathan Ang scored the winner with 1:35 remaining in the five-minute overtime period.

The Storm open the regular season next Friday, September 25, when they welcome the defending Memorial Cup Champion, Oshawa Generals. Game time is 7:30 PM.

– Forwards Robby Fabbri, Vladislav Barulin, and Kyle West, along with defenceman C.J. Garcia did not play

– A 5-minute, 3-on-3 overtime period was played at the end of regulation in advance of the new format taking place in the regular season