From the Stands releases 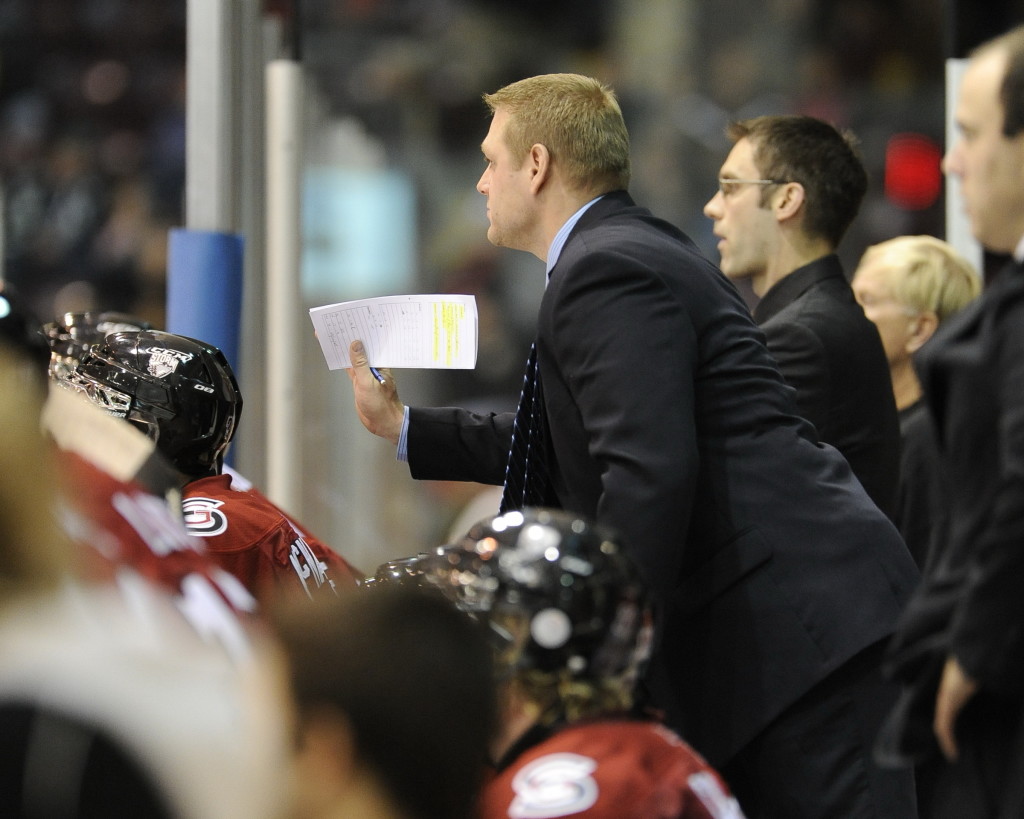 I’ve always felt that there were three key team elements necessary to win when the going gets really tough –talent, character and discipline. It was only the first weekend but the Guelph Storm needs to upgrade the final two elements if they want to be favourites in the Western Conference.

The Guelph Storm skated in nine periods of hockey on the weekend but only played well in two of them. The result was two losses and a win against division rivals and a flashback to the first half of last season when it was every man for himself.

The good news is that the best two periods came on Sunday when for the first time in three games, they hustled, moved the puck and looked dangerous on several occasions. The problem was they took far too many silly penalties and allowed the Kitchener Rangers to score four goals in the third to win 6-4.

“I’m going to take the positives out of this one,” said Brooks who wasn’t nearly as upset with Sunday’s loss as he was with Friday’s 3- 2 win over Owen Sound when goaltender Brandon Foote was left to fend for himself making 41 saves.

“It’s our third game in two and a half days, Taylor Beck was up at 3:30 this morning for a 6 a. m. flight and the others were mentally and physically tired.”

Beck made an instant impact and whenever he and Peter Holland were on the ice together, they were dangerous.

“We gave up five 5-on-3 (man advantages),” said Beck who had a goal and a beautiful set-up pass on Holland’s powerplay marker. “Some were questionable calls by the refs but we took way too many. We definitely have to smarten up.”

The lack of discipline was a theme much of the weekend. Unfortunately leading the way was veteran Michael Latta. Over three games he took seven minors and most were unnecessary and in some cases down right undisciplined. Latta is a player who plays on the edge but as a 19-year-old he has to have the mental toughness to not hurt his team.

Latta wasn’t the only one who has to play better, Matt Sisca was minus-4 in Owen Sound and sat out in favour of overage defence-man Chris Van Laren on Sunday. Daniel Maggio can bring a lot more and others like Zack Mitchell and Francis Menard were pretty much invisible.

In other words, it was a total team effort. Even Foote, who was spectacular on Friday, let in a bad goal Sunday that gave momentum to the Rangers.

The best thing that could be said about the opening weekend was that the new scoreclock/TV screens were spectacular. Friday’s poor effort was muted by the fact that everyone was buzzing about how great the video boards were.

Brooks feels that despite the loss to Kitchener, they might have turned an early corner.

“We haven’t even had a practice yet with all our players,” said Brooks.

“Holland, Latta and Maggio got back at the last minute and Beck flew in (Sunday) morning. But today, for the first two periods, we played with passion and I’d like to think that many of our penalties were taken because we were tired.”

This weekend they host Niagara on Friday and travel to Sarnia on Saturday. Brooks feels a week of practice will get everyone on the same page.

In a conference once again loaded with strong teams, the Storm can’t wait long to reveal itself as a contender.