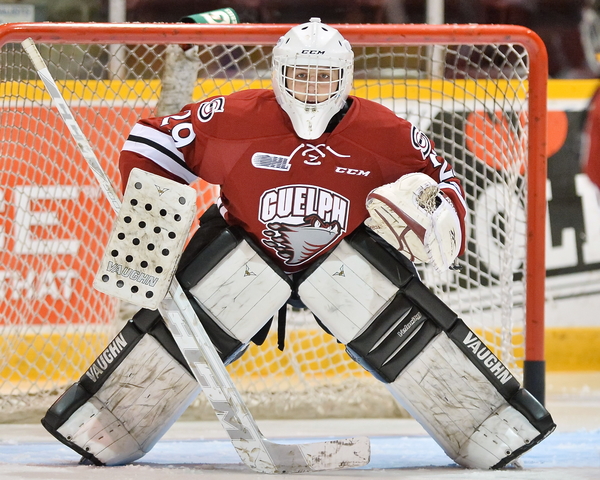 GUELPH, ON — With several players out of the lineup and a ‘3-in-3’ schedule, it was a long road to get to Sunday night’s battle with the Oshawa Generals at the Sleeman Centre.

With Bradley Van Schubert standing tall in his first start since Oct. 26, the Storm almost traversed that long road to another victory, before falling short by a score of 3-2 to the CHL’s top-ranked Generals.

Van Schubert made 42 saves in just his second OHL start, earning first star honours and providing the Storm with a platform to nearly make a third-period comeback.

The rookie netminder showed no signs of rust in the first period, stopping all 12 shots sent his way.  A tentative pace took over the first period, perhaps a sign of both teams playing their third game in three nights this weekend.

Early in the second, it didn’t take the Generals long to capitalize on some extended pressure in the Storm zone.  During a goalmouth scramble, Joe Manchurek pounced on his own rebound and slid one past Van Schubert to put the Generals up 1-0.

Less than two minutes later, with the Generals on a power-play, Sam Harding jammed the puck into the yawning cage following a point shot from Gens’ power-play ace Mitchell Vande Sompel.  The 2015 NHL draft-eligible defenseman has 33 points in 30 games, ranking second in the OHL in points from the blueline.

At the other end of the ice, Ken Appleby made two point-blank saves on Tyler Bertuzzi in the middle frame and added another on a glorious chance from Pius Suter.

The Generals extended their lead early in the third period on a one-timer from Aidan Wallace, with rookie Cliff Pu earning his first OHL point with an assist on the goal.

It was Suter who finally got the Storm on the board at 5:16 of the third period, as the Swiss sophomore sniped one off the right post and in from his familiar position in the slot.

Later in the third period, newcomer Luke Cairns capped off a brilliant passing play with Bertuzzi and Suter, notching his ninth goal of the season to bring the Storm within a goal.

With each team exchanging penalties in the last couple minutes, the Storm pulled Van Schubert to make a last-ditch effort to tie the game, but Generals’ Appleby was equal to the task.

– With a goal and an assist tonight, Luke Cairns has seven points in six games since joining the Storm earlier this month.

– Tyler Bertuzzi extended his point-streak to six games, during which he has posted 11 points (five goals, six assists).

– Suter’s 19th goal of the season ties him for the team lead with Tyler Bertuzzi.

– Justin Nichols had started 18 straight games for the Storm prior to Van Schubert getting the start Sunday.

– Guelph native Sam Natale made his home debut with the Storm after making his OHL debut on Saturday in Plymouth.

– Pius Suter and Phil Baltisberger will practice with the Storm early this week prior to leaving for the Swiss team selection camp at the World Junior Hockey Championships.

– Tonight’s loss snaps a five-game winning streak at the Sleeman Centre for the Storm, which began on November 9 in a 9-4 win over the London Knights.  The team’s home record drops to 10-5-0-0.

– The Storm once again see a three-in-three schedule this coming week. The Sault Ste. Marie Greyhounds visit the Sleeman Centre on Thursday, followed by the Storm travelling to London on Friday, and returning home to host the Erie Otters on Saturday.