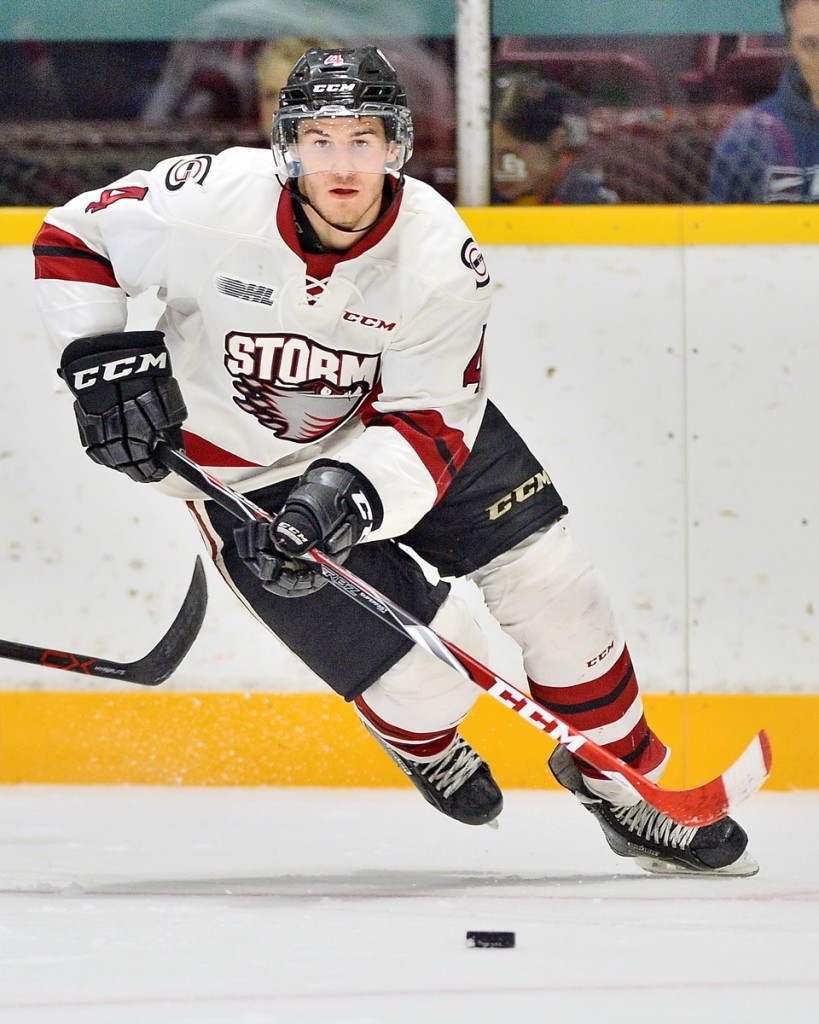 For Noah Carroll, it was never about the next level.

“I was just playing,” the Guelph Storm defenseman said when asked if there was a moment he realized a major junior career was in reach.

“I never thought about that,” he continued. “For me, I was just playing the game that I always had so much fun with.”

Although an answer that differs from most, it’s nothing but fitting for this second-year OHL blue liner.

“I’m the fun guy in the room,” Carroll said with a smile. “I keep things loose.”

“I was always pretty subdued, laid back, and quietly independent. Noah definitely has a more outgoing, funny, personable and extroverted personality,” Tyler added to Noah’s counter that the two brothers, separated by seven years, are completely different – both on and off the ice.

Evidently though, the fun-loving, charming side of the most recent Carroll to wear crimson doesn’t take away from Noah’s abilities on the ice.

“I was home for the summer and he was going into his 17-year-old year and he came out to a summer scrimmage,” Tyler remembered, adding that the two don’t see each other often due to attending university in New Brunswick. “It was the first time I had been on the ice with him, or seen him play, since his minor hockey days. I couldn’t believe how good he was.”

“I remember going extra hard on him so he didn’t get the best of me.”

More impressive for the former Storm forward of four years is found in Carroll’s short stint on the blue line.

“He only started playing defense full time his last year of minor hockey and was able to impress enough to be selected by Guelph,” Tyler said of Noah. “Then he had a serious injury in his first year of junior and came back the next year to crack the Storm roster.”

Cracking the Storm roster began in 2013 as Carroll was picked in the fourth round (77th overall) in the OHL Priority Selection – a day that made one older brother more than proud.

“I was probably just as or even more excited than he was on draft day,” Tyler said of seeing his youngest brother selected by the same team he played major junior with. “I had the draft up on my computer and kept watching the picks go by, and right before the pick, I got a call from Chris Hajt who told me they were taking him.”

Now in his second season with the Storm, Carroll still sends credit to his brothers for helping pave the path to where he is today.

“They never let me win, never took it easy on me,” Noah said of both Tyler and the middle Carroll, Matt.

“I was a pretty straight shooter with him and never treated him as if he were younger,” Tyler added. “Playing street hockey with the neighbourhood kids, he never got a free pass.”

Now, with the difference in ages not playing so much of a factor, the competition has certainly amped up for the Carroll’s.

“As we’ve gotten older our competitive spirits have really come out,” Tyler said, offering that not seeing each other often encourages that. “Games like monopoly or cards become pretty intense. None of us like to lose either, so it can get ugly.”

No matter who wins that game of monopoly, though, Tyler makes one thing clear when it comes to his youngest brother.

“I’ll always be proud of Noah,” Tyler said. “He’s done so much in such a short period of time, it’s exciting where he could end up.”

“It’s his persistence, hard work, and dedication to the sport that’s evident in his quick rise to junior hockey,” he continued.

And at the end of it all, even with one stand out funny extrovert contrasting that of an older, quiet and laid back introvert, the two will always have a significant connection.

“I don’t get to see him play very much,” Tyler said. “But any time that I do, I get chills and have immense pride that he gets to pull on the crimson and white jersey.”