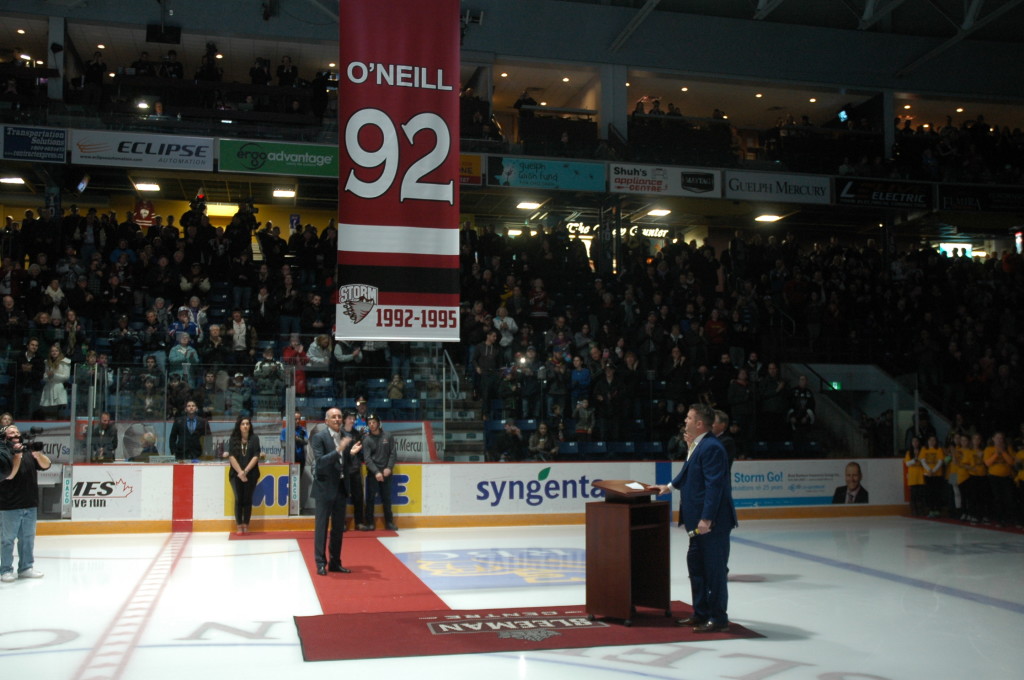 Leave it up to their Highway 7 rivals to spoil the party.

On a day where the Guelph Storm’s all-time leading scorer, Jeff O’Neill, was honoured with a banner raising ceremony, the rival Kitchener Rangers came to town and ruined the fun.

The Storm (2-19-1-0), the OHL’s lowest-scoring team, certainly could have used one of O’Neill’s 120 career goals scored in a Guelph uniform, too.

Kitchener (18-2-3-0) used three third period goals to propel themselves to a 5-1 win over the Storm, handing them their sixth straight loss.

Adam Mascherin scored 1:24 into the third period to give Kitchener a two-goal lead and draining away any life Guelph had in the contest.

Playing four-on-four, Mascherin scored after Storm defenceman Garrett McFadden rushed to the bench after breaking his stick. The Rangers’ forward picked a spot short-side on Bradley Van Schubert before McFadden could get back into the play.

The goal made it 3-1 for the visitors early in the final frame before Gustaf Franzen extended the Kitchener lead to 4-1. Franzen poked in an easy goal after Van Schubert delivered an incredible save on a Joseph Garreffa wrap-around attempt.

With 5:24 remaining, Jeremy Bracco made the hurt even worse for Storm fans when he tallied to make it 5-1.

Thanks to Van Schubert’s start of the season, Guelph trailed by just a single goal while being outshot 19-7 halfway through the game.

Vladislav Barulin knotted the game at one when he redirected a centering James McEwan pass, who was standing to the right side of the Kitchener net, past Kitchener goaltender Luke Opilka, .

Just 37 seconds later, the Rangers reclaimed the lead when Dylan Di Perna fired a slap shot to the left of the net past Van Schubert’s blocker.

Despite a four-minute penalty near the end of the middle frame, Guelph’s league-worst home power play (10.8%) could not capitalize.

Mason Kohn opened the scoring 8:30 into the game when his shot rang off of both posts before trickling over the line behind a sprawling Van Schubert.

Van Schubert stopped 35 shots in the loss while Opilka made 22 saves in the victory.

Final shots were 40-23 for Kitchener.

The Storm have now dropped 16 of their last 17 games.

Guelph returns to action next Friday, November 27 when they begin a two-game road trip in Kingston. Puck drop is scheduled for 7:00 p.m.

– Tonight’s game was the 3rd of 8 meetings this season. Kitchener currently leads the season series 3-0.

– Prior to the start of the game, the Storm honoured their all-time leading scorer, Jeff O’Neill, with a banner-raising ceremony.