Storm vs. Knights… after 20 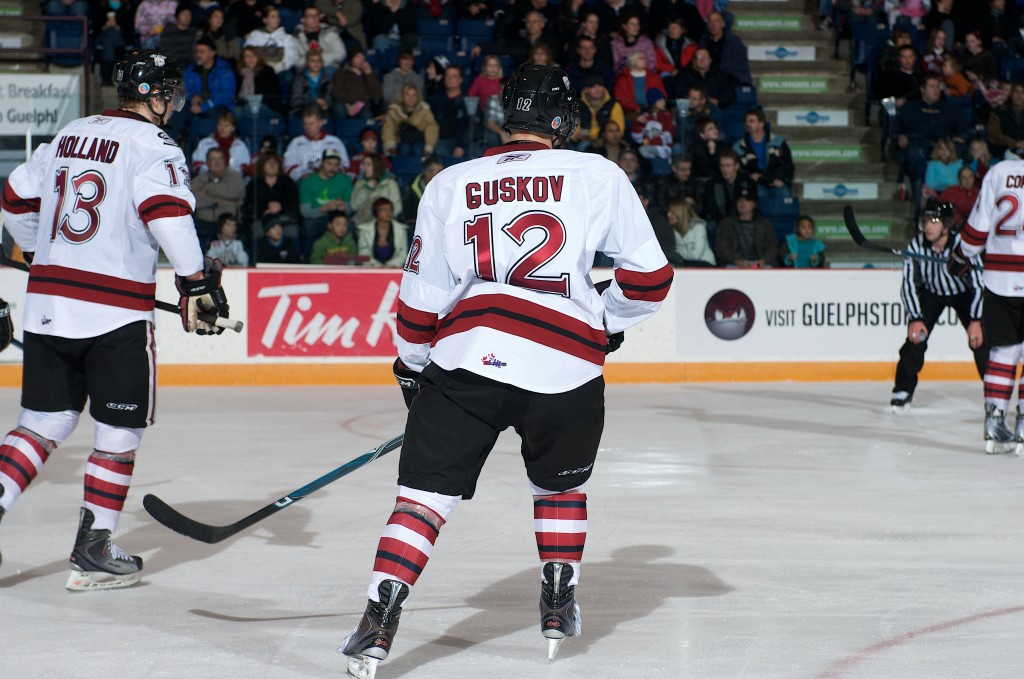 Tuesday night at the Sleeman Centre in front of a sell-out crowd of 4,811, the Storm gave up three goals in less than seven minutes in the middle twenty and couldn’t recover in a 4-2 loss.

Tied at one after one, both teams had several quality chances to add to their totals in the first.  For Guelph, three shots off the iron saved Michael Hutchinson while Cody St. Jacques made a couple nice stops to help the Storm.  Former Storm winger Leigh Salters opened the scoring with his 11th of the season on the powerplay.  After St. Jacques kicked out a Phil Varone shot, Salters jumped on the rebound to make it 1-0.  The Storm would tie the game at one just over three minutes later with the duo of Taylor Beck and Matt Sisca continuing their hot play.  Breaking into the London zone on a two-on-two, the pair would criss cross before Sisca backhanded a feed to Beck driving the goal for a quick shot past Hutchinson.  Shots on goal in the first were 13-10 in favour of London.

In the second, the Knights would score two early and add another before the period was eight minutes old to build a three goal cushion.  Daniel Erlich started the outburst on a wraparound goal that slid through St. Jacques.  Just 76 seconds later, London would open their first two goal lead of the night when Colin Martin picked up a loose puck along the side boards and drove to the net beating St. Jacques between the legs.  Less than a minute later, Guelph’s Connor Tresham was assessed a five minute slew foot penalty that would give London a three minute powerplay after Salters retaliation minor.  The Storm were three seconds away from killing the penalty when Phil Varone turned a Guelph blueliner inside out and went high glove for his fifth of the season.  The Knights held a slight edge in shots on goal in the period outshooting Guelph 13-12.

Down three heading into the third, the Storm would pull within one before the period was five minutes old, but it was as close as they would come.  Vadim Guskov with his first career OHL goal did the damage for the hosts one-timing a feed from Ryan Horvat in the slot with Michael Latta getting the second assist.  For Horvat, the point was his first in the league in his first ever game.  Guelph would have chances to cut into the lead, but it was the Knights that had the best chance of the frame with Cody St. Jacques robbing Jared Knight.  The Storm outshot London 12-8 in the final stanza to even the shots on goal totals at 34 for the game.

The Storm will host another Western Conference powerhouse on Friday night at the Sleeman Centre when the Windsor Spitfires come to town.  For tickets to Friday’s game call or visit the Guelph Storm box office or purchase online at GuelphStorm.com.