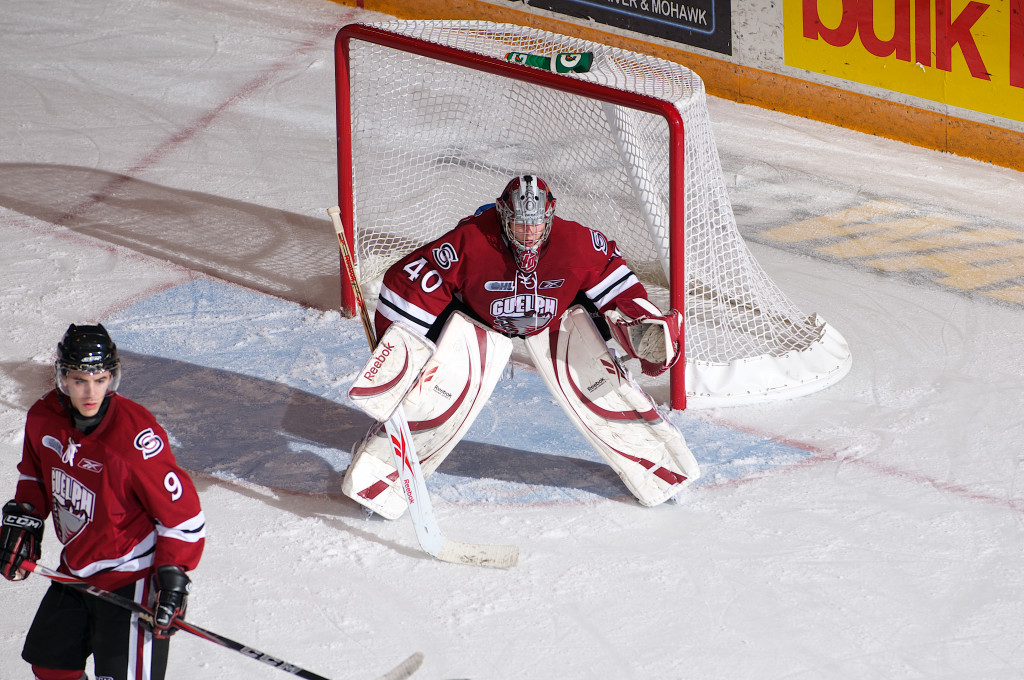 By the Goalie Guild Scouting Service

When the Toronto Maple Leafs selected Guelph Storm goaltender Garrett Sparks in the final round of the 2011 NHL Entry Draft, our Twitter feed totally exploded with fans wondering who, what, when, where and why. For with the recent addition of Djurgarden’s Mark Owuya, and the terrific rookie season by Ben Scrivens helping him earn a new two-way contract, many believed that the Leafs goaltending aisle was stocked for many years to come.

But when you discover a prospect that clearly has the elements of what Leafs goaltending consultant Francois Allaire is known for masterfully molding, it’s hardly considered a risk to stockpile more puck-stopping talent. And at 190th overall, the Elmhurst, Illinois native is out to prove that where there’s Sparks, there’s also a fire.

Always considered a “big goalie” at around 6-foot-2 and 200 pounds, Sparks was originally plucked by Guelph in the eighth round of the 2009 OHL Priority Draft. The following season, Garret led the Chicago Mission to the the U.S. Under-18 National Championships. When all was said and done, he had posted a 19-7-0-3 record, a 1.98 goals against average and a .907 save percentage.

Maybe his finest moment of the season, however, was his first-ever win. Wearing stiff, brand new pads, Garret prepared as the backup just like any other game. But when Foote went down with a pre-game injury in warm-ups, Sparks was thrust into the starter role for the game. Although it was just his third appearance as an OHL goaltender, Sparks played like it was his third season.