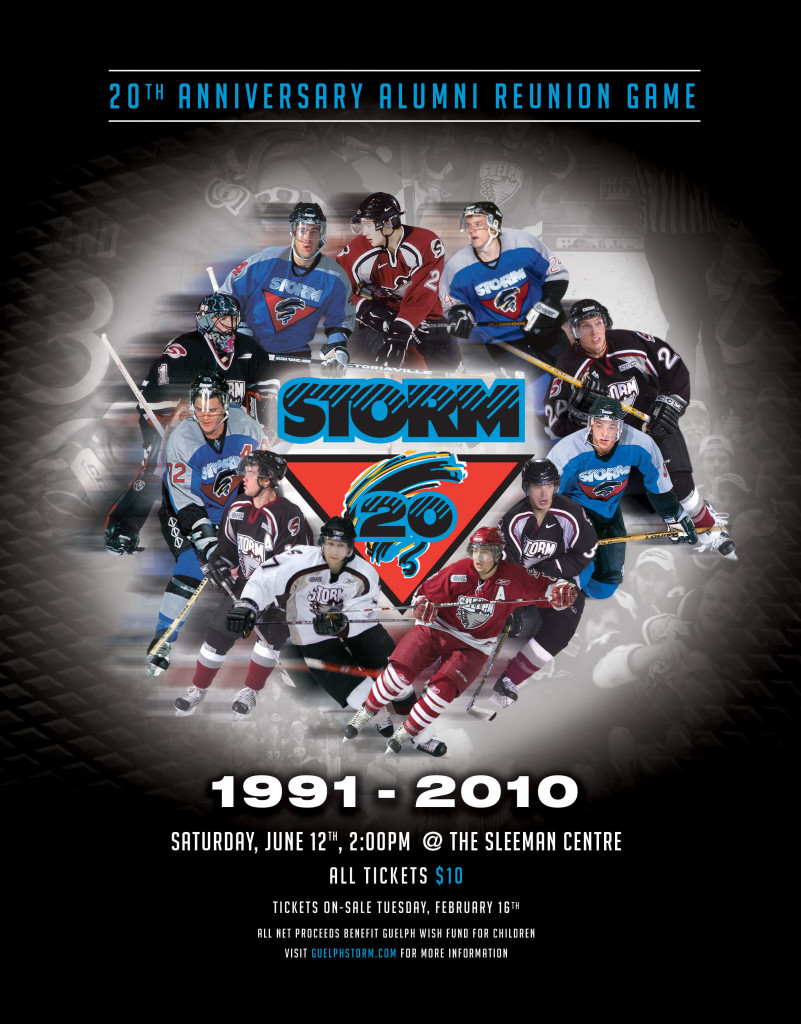 After narrowing the field of Storm all-time players from nearly 300 down to 100 and then down to the ‘Fans Choice 40’, the ‘Top 20 Players of All-time’ were decided by a panel of 8 last week.

When the calendar flipped to 2010, it brought the 20th year of Guelph Storm hockey to the Royal City.  The Guelph Storm will celebrate their 20th season beginning this summer with an Alumni Reunion Weekend (June 11-13) featuring a banquet for former players and their families.  The marquee event of the weekend will be an Alumni Game for local charities at the Sleeman Centre featuring many Storm greats including countless players that graduated from the OHL and moved on to the NHL.

To help celebrate the Storm’s 20th year, the club conducted a survey including fans and local Storm experts to decide the Top 20 Storm Players of all-time.

From that list each player was reviewed with a quick vote deciding seven unanimous selections including:

With seven spots decided, the panel went to work to determine the remaining 13 players beginning with goaltenders.

Chris Madden was the first consensus pick among netminders, leaving a tough decision between Craig Anderson, Adam Dennis and Thomas McCollum.  After some deliberation, the panel selected Thomas McCollum as the second goaltender.

With two goalies determined, it was time for the forwards with a long list of players to consider.  Spots were quickly awarded to Jeff Bes, Dustin Brown, Sylvain Cloutier, Brian Willsie and Jamie Wright.  There was considerable debate concerning the final two positions among the trio of Jason Jackman, Manny Malhotra and Todd Norman.  The discussion would go on for several minutes until it was decided to delve into the defencemen.

With unanimous picks Drew Doughty and Ryan Parent holding down two spots, several defenceman were considered for the remaining four defence posts.  Kevin Dallman, Chris Hajt and Kevin Mitchell quickly rose to the top of the list leaving just one vacant spot.  After some lengthy conversation, the list of contenders was whittled down to three former blueliners including Dan Girardi, Regan Stocco and Fedor Tyutin.  Like the decision on the final forward spot, this choice was going to have to wait after some more debate.

Returning to the forwards, the panel decided on Malhotra and Norman, leaving Jackman off the final list.

With just one position left to be determined, the panel chose Dan Girardi over Stocco and Tyutin closing the books on the ‘Top 20 Storm Players of All-Time’.