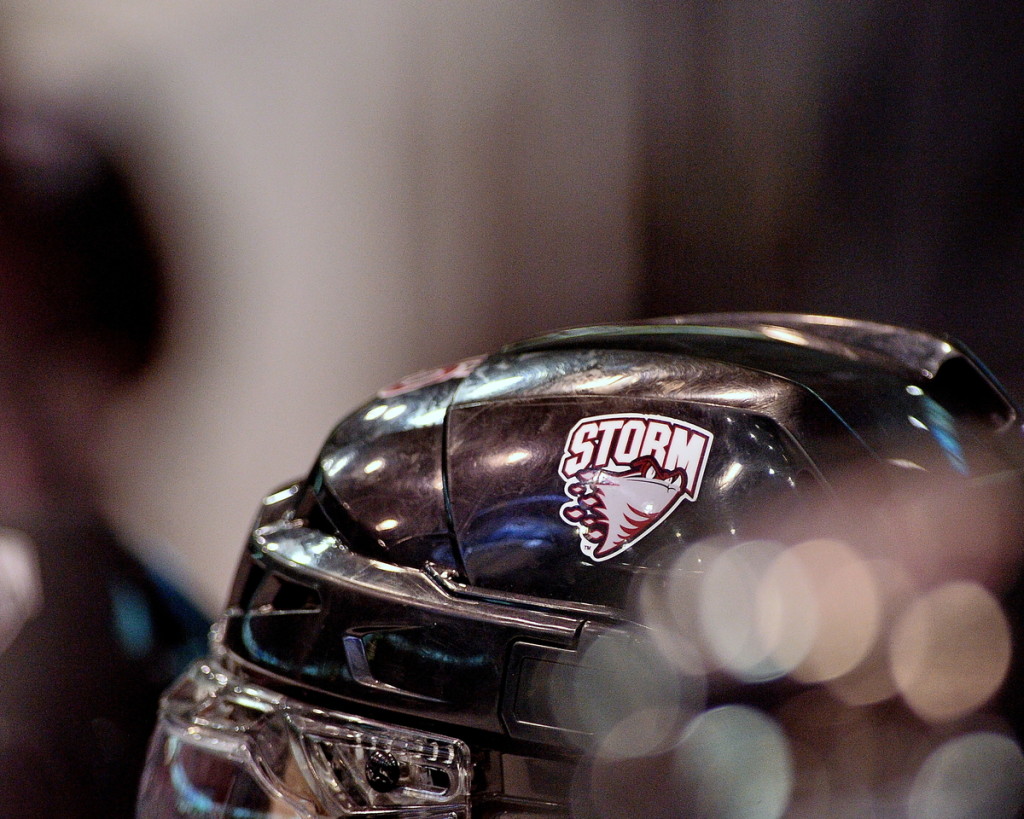 Fighting for their playoff lives, the Guelph Storm wish they had just a little more time.

The Storm found themselves in a 3-0 hole before scoring two goals, but the clock ran out before their comeback could be completed as they fell 3-2 to the Sault Ste. Marie Greyhounds in Game Four of the Western Conference Semi-Finals Tuesday night at the Sleeman Centre.

The loss meant the end of Guelph’s season, with the Greyhounds sweeping the second round series 4-0.

After surrending three straight goals, Pius Suter scored two of his own to bring the Storm within a goal. Bradley Van Schubert, making his first career playoff start, stopped 32 shots in the loss.

Scoring for the Soo were Bryan Moore, Jared McCann, and Nick Ritchie, while Brandon Halverson turned away 28 shots in the victory.

A very physical, fast-paced, and action-filled game is how the contest began.

The Greyhounds had the edge during the initial 10 minutes, though, outshooting Guelph 10-3 at the halfway mark.

Although each team swapped power play opportunities and scoring chances, neither team could notch the games opening goal. Van Schubert stopped all 16 shots he faced in the period.

The horn sounded on the first period with a 0-0 tie and the Soo outshooting the Storm 16-8.

The pace of the first 20 minutes would set the tone the remainder of the way.

Much like the first period, the first half of the second period was filled with end-to-end action.

The teams remained scoreless until 11:18 remained in the period, when the visiting Soo broke the tie.

Moore scored with a quick redirect at the Guelph crease after a centering pass from Tyler Ganly in the right corner. The goal came on the Greyhounds’ 20th shot of the game.

The top-seeded Soo widened their lead with just over six minutes to play in the second. After winning a puck battle behind Van Schubert’s net, McCann tapped in a cross-crease feed from Moore.

Just 53 seconds after their second goal, the Greyhounds extended their lead to three.

Ritchie collected the puck in the slot, faked a shot, and outwaited a sprawling Van Schubert before placing a backhand shot over the Storm goaltender.

However, the Storm would not go down without a fight.

Suter got the Storm on the board 1:58 later. On a two-on-one break with Jason Dickinson, Suter one-timed a pass from the Guelph captain that beat Halverson.

The goal cut the Soo’s lead to 3-1, and that’s how the teams skated into the second intermission. The Greyhounds led 26-18 in shots after 40 minutes.

The Storm started the third period shorthanded after a Soo penalty expired, ending four-on-four play at the tail end of the second period.

1:27 into the final frame, Suter tallied his second goal of the game and second shorthanded marker of the playoffs to bring the Storm within a goal.

After a successful zone entry by Dickinson, Suter found the puck on his stick at the right side of Halverson’s crease. With Halverson unsure of where the puck was, Suter banged the puck in to make it a 3-2 game.

Fighting for their playoff lives, the Storm threw everything they had at Halverson and the Greyhounds.

Despite outshooting the visitors 12-9 in the third period, Guelph would fall short in completing the comeback, losing 3-2.

With the win, the Soo sweep the series 4-0 and advance to the third round of the OHL playoffs.

Final shots in the game were 35-30 for the Greyhounds.

– Pius Suter recorded his first multi-goal playoff game. 2 of his 3 goals in the 2015 Playoffs were scored shorthanded.

– The Storm are officially eliminated from the OHL Playoffs, losing the series 4-0 to the Greyhounds.