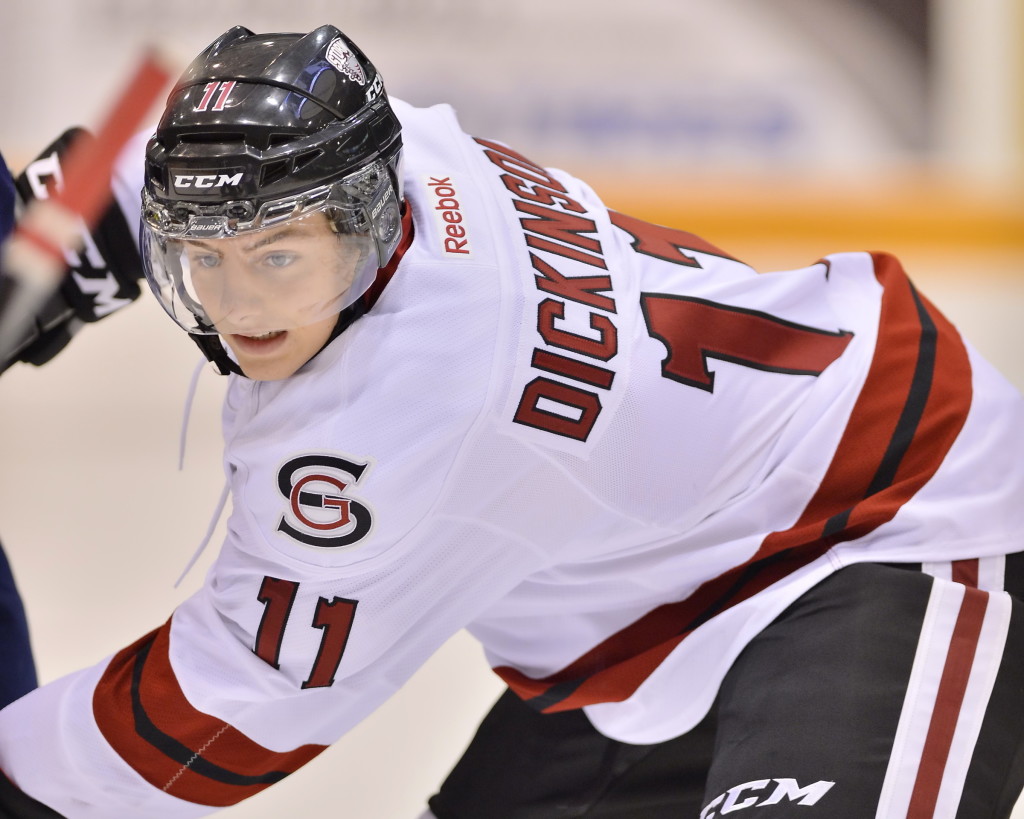 The Guelph Storm stayed hot and continued their winning ways on Friday night when they defeated the visiting Peterborough Petes 5-3 at the Sleeman Centre.

Nick Ritchie, Josh MacDonald, and Hunter Garlent scored for the Petes. Matthew Mancina made 25 saves in the loss.

The game featured two former Storm players playing for the Petes. Garlent played 147 games in a Guelph jersey while Mancina suited up for 31 games for the team.

It wouldn’t be completely crazy to mistaken the two teams as division rivals, as the entire game saw a fast-paced and physical style. The intense play started right from the drop of the puck at the beginning of the game.

Amidst the back and forth action early on, Ritchie would ensure the Petes got on the board first when he sneaked off the bench undetected and ripped home a low wrist shot past Nichols just under five minutes into the game.

Dickinson, who now has nine points in his last five contests, would even the score at one on Guelph’s second power play of the game four minutes later. The Storm captain skated into the Peterborough zone down the left wing and scored on a laser of a shot past Mancina that popped out of the net just as fast as it went in.

The Petes would retake the lead with MacDonald scoring on a 4-on-3 power play, deflecting a Ritchie point shot at the last second that gave Nichols no chance.

Guelph would once again tie the game courtesy of Fabbri. Fabbri, amassing 11 points in his last five games, knotted the contest at two when he found a loose puck in a scramble in the slot and beat a screened Mancina with a blocker-side wrist shot.

The teams headed to their respective locker rooms in a 2-2 tie with Peterborough outshooting the Storm 13-8.

The second period started off with the same fast-paced play as the first, eventually leading to a Fabbri breakaway five minutes in where Mancina made a beautiful save to keep the score tied.

A second Guelph breakaway just seconds later, this time from Suter, would have a better result. Suter snapped a low shot over the blocker of Mancina to give Guelph a 3-2 lead, their first of the evening.

Peterborough would have a golden opportunity to give the game its third tie of the night when they were awarded a 5-on-3 power play for 57 seconds late in the period. Nichols and the rest of the Storm penalty kill unit were solid to escape the two-man deficit with their 3-2 lead intact.

However, with just 2.5 seconds left in the period, the Thorold, Ontario native Garlent would pop the puck past Nichols to send the game to another tie after 40 minutes.

It took just over seven minutes into the third period for Dickinson to score his second of the game when he found himself alone behind two Petes defenders in the slot.  The Georgetown, Ontario native beat Mancina, who got a piece of the shot but not quite enough, to provide Guelph with a 4-3 lead.

Bertuzzi would give the Storm an insurance goal late in the period to give us our final: Guelph 5, Peterborough 3. The win was Guelph’s fourth straight at home.

The Storm outshot Peterborough 30-26 and are now a perfect 6-0 when outshooting their opponents at home.

With the victory, the Storm improve to 16-10-0-1 while the Petes drop to 9-13-1-3. The Storm are next in action on Sunday in Saginaw before returning  home next Friday, December 12 for a 7:30 PM start versus Owen Sound. The game is Guelph’s annual Teddy Bear Toss.

– Petes forward Hunter Garlent and goaltender Matthew Mancina each made their return to the Sleeman Centre. Both are former Storm players.

– Jason Dickinson now has 9 points in his last 5 games.

– Newly acquired Luke Cairns now has at least a point in both games with the Storm.

– Next Friday’s home game is the annual Teddy Bear Toss.